Compared with their counterparts in other democratic countries, South Korea’s national public broadcasters are politically vulnerable.

Tied to whichever government is in power, they are saddled with a compromised board system and limited options for editorial independence across TV, radio and online content.

This has led to strikes demanding freedom from political influence. Most recently, the unionised staff at two of Korea’s largest broadcasters – the Korean Broadcasting System (KBS) and the Munhwa Broadcasting Corporation (MBC) – walked off the job in September.

Although a version of KBS launched in the 1920s under the Japanese colonial government, KBS TV was established in 1961 by the Korean military dictator Park Jung-Hee. It was owned and operated by the state until 1973, when it transformed into a national public broadcaster.

MBC, on the other hand, started as a commercial entity in the 1960s. It was forced to become a public broadcaster during the 1980 media reforms. These placed all existing broadcasters under the umbrella of “public service broadcasting”.

Not currently run by the government, it is majority-owned by the Foundation of Broadcast Culture (FBC), which is subject to political influence. For this reason, it is widely seen as a public broadcaster.

From this patchwork of businesses, Korean television broadcasting has become a highly politicised industry – one that is troublingly susceptible to state intervention.

A lack of mission

From the beginning, public service broadcasting in Korea has operated without a clear justification for its existence as a non-commercial nor non-politically-influenced institution.

This is especially true when it comes to funding. KBS’s revenue comes from licence fees and advertising, while MBC’s funding is solely from advertising.

The board members of KBS and the MBC are selected on the basis of their political and ideological stance. This is not always the case in other regions. For example, the board members of Australia’s public broadcaster, the Australian Broadcasting Corporation (ABC), are appointed as part of an arguably merit-based and transparent selection process.

In South Korea, the board members of KBS and FBC, the public organisation responsible for MBC management, are all directly or indirectly appointed by the Korean president at the recommendation of the National Assembly, the country’s legislature.

For KBS, this includes seven members associated with the ruling party and four from the opposition party. For FBC, there are six and three, respectively.

Also, unlike in Australia, no laws specify the role of public service broadcasting. The absence of legal guidelines has created a situation where both KBS and MBC are in competition with each other, and with other commercial broadcasters like the Seoul Broadcasting System (SBS). 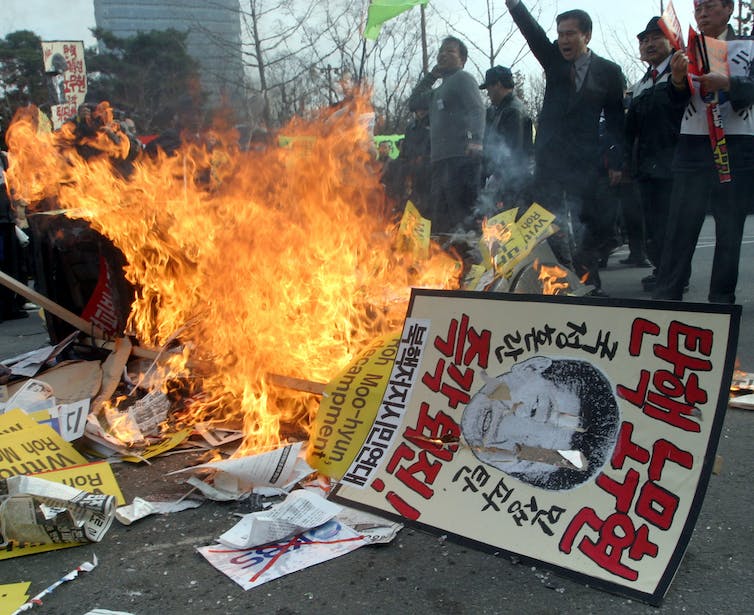 South Korean protesters from conservative civic groups burn TV sets and signs at a rally against local Korea Broadcasting Systems (KBS), which they insisted was biased in its report over impeachment of President Roh Moo-hyun, in Seoul March 19, 2004. REUTERS/You Sung-Ho LJW

Korea’s public broadcasters have periodically attempted “self-censorship” in support of the government of the day.

During progressive governments (1998-2007), the presidents of the two public broadcasters were more or less handpicked by the progressive presidents, and their boards were controlled by party-supported members.

During recent conservative governments (from 2008 to April 2017), the conservative-supported presidents and board members largely dictated programming.

For example, during the Choi Soon-Sil scandal – a case of political corruption that emerged in 2016 and led to President Park Keun-Hye’s impeachment in March 2017 – both KBS and MBC failed to provide accurate, objective news.

In particular, at the initial stage of the scandal, their coverage was biased in favour of President Park.

Likewise, in 2004 when the progressive President Rho Mu-Hyun was impeached, KBS and MBC coverage was biased in favour of the incumbent president and the ruling progressive party.

No will to change

The politicisation of the public broadcasters in Korea has created profound internal conflicts.

Encouraged by the progressive candidate’s victory in the 2017 presidential election, the progressive unions within KBS and MBC have been on strike since September 4. They demand the resignation of the president of each of the two stations and editorial independence.

It is not the first time that the unions have staged strikes against alleged management interference in news coverage. The same unions held a strike for several months in 2012 in protest of the conservative President Lee Myung-Bak government’s attempt to control the media, but it subsided without success.

Read More: The BBC and public service TV has a future – but it must change to survive

The current Moon Jae-In government – via the unions and the government regulator, the Korean Communication Commission – is pressuring the conservative-supported board members of KBS and FBC to stand down. They are also attempting to oust the presidents of KBS and MBC, who had been handpicked by former President Park.

This time around, the government and ruling progressive party support the strike. It’s likely to achieve some of its aims: two conservative-supported board members of FBC have already stepped down in recent weeks.

Yet we have seen this before. In 2008, the conservative president Lee Myung-Bak and his administration also forced the progressive president of KBS and board members to resign.

This is the key problem: the presidency will continue changing hands. If the government and ruling party control the appointment of personnel, and have a say in the editorial process, Korea’s public broadcasters will always be compromised.