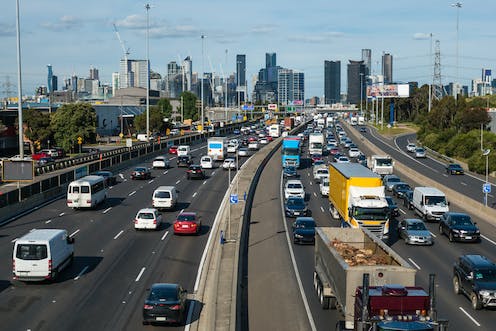 Australian cars are using 23% more fuel than advertised, according to a report from the Australian Automobile Association, which also claims that eco-friendly hybrid electric cars emit four times more greenhouse gas than the manufacturers advertise.

The report on real-world (that is, on-road) emission testing was commissioned by consultancy firm ABMARC to test 30 cars twice on Melbourne roads. The method used to measure both the emissions and the fuel consumption was a so-called Portable Emissions Measurement System (PEMS).

How are emissions from vehicles measured?

Australian Design Rules (ADR) stipulate that before introducing a new vehicle model on the market, every car or truck manufacturer in Australia has to test one new car in the laboratory.

This is done by placing the vehicle on a chassis dynamometer, connecting the exhaust to highly accurate emissions-measurement equipment, and driving the vehicle according to a strictly defined routine.

The chassis dynamometer simulates the load conditions that the vehicle would experience if it were driven on a road. In current practice, the New European Driving Cycle (NEDC) is used. This defines the speed of the vehicle and rate of acceleration for every second of the 20-minute test.

There is strict control of the testing protocol, with stipulations on how and when the gears should be changed, right down to minute details such as turning off the radio while the headlights are on. This strict control enables testers to compare the performance of different vehicles measured in different laboratories around the world.

However, these highly defined conditions have led to certain manufacturers enabling the car’s engine management system to recognise when it is being tested and to adopt and produce cleaner exhaust emissions. The most famous example of this is the recent VW scandal that affected millions of vehicles worldwide.

Even though the driving cycle has “new” in its name, NEDC was designed in the 1980s and today can be considered outdated.

To address these challenges, Real Driving Emissions (RDE) tests were developed. RDE tests measure the pollutants emitted by cars while driven on the road. To run a RDE test, cars are fitted with a Portable Emissions Measurement System (PEMS).

A PEMS is a complex piece of equipment that sits in the back of the car and monitors key pollutants emitted by the vehicle in real time as it is driven on the road.

These tests have proved extremely useful in highlighting some of the shortfalls of the laboratory tests. They can be run for much longer periods (several hours as compared with 15-30 minutes in the laboratory) and can give us information on long-term emission performance of the vehicles. They will not replace laboratory tests, but can provide additional information.

RDE requirements will ensure that cars deliver low emissions during on-road conditions. In 2021, Europe will become the first region in the world to introduce such complementary on-road testing for new vehicles.

RDE tests still face several unresolved challenges. The first is that the PEMS are still being developed and are not as accurate as the lab measurement equipment. The second, and more important, is the variability that one encounters while driving in real-world road conditions.

In order to compare the RDE test results with the laboratory-based standards a “conformity factor” is defined as a “not to exceed limit” that takes into account the error of measurements. This error is due to the PEMS equipment being less accurate, the variability in road conditions and driving behaviour, and thus the fact that the RDE tests will not deliver exactly the same results for each run.

A conformity factor of 1.5 would mean that the emissions measured by the PEMS in an RDE test should not exceed the standard NEDC test by more than a factor of 1.5. This is exactly the value that European Union legislators want to introduce - but not before 2021.

Australia is years behind

Australia remains years behind the European Union when it comes to vehicle emission standards.

Australia needs to upgrade to meet Euro 6 standards in order to provide effective detection of new vehicles. These include measures such as remote sensing as part of a vehicles road-worthiness assessment. This would help to ensure the maintenance status of vehicles and deliver compliance with Euro 6 RDE legislation.

What the Australian Automobile Association report highlights most of all is that the in-use vehicles (whether or not they are hybrid vehicles), many of which fall under the Euro 5 standard (or older), have almost all failed emission tests.

Until Australia updates our vehicle testing regimes to meet international standards, it will remain extremely difficult for Australians who want to buy an energy-efficient vehicle to make an informed purchasing decision.