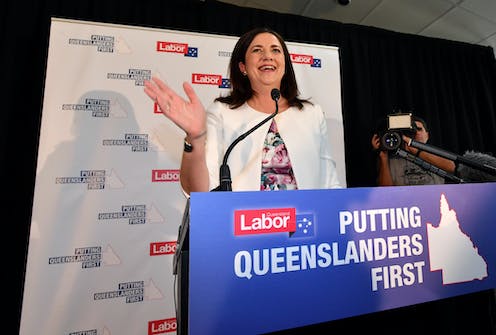 Queensland’s state election has been called for November 25. The outcome is, at this stage, anyone’s guess.

Premier Annastacia Palaszczuk cited her disendorsement of sitting MP Rick Williams, and the resignation for health reasons of minister Bill Byrne, as triggers for an election months before it was due.

Williams’ subsequent resignation from the ALP to contest his seat as an independent leaves the Labor minority government and Liberal National Party opposition both holding 41 seats in the 89-seat state parliament.

Polling has typically had the government slightly ahead in two-party-preferred terms. But narrowing poll margins and the major parties’ shrinking primary vote share point to a tight result – and potentially another hung parliament.

In this scenario, the election “winner” could be forced into tricky negotiations with minor parties to form government. Yet Palaszczuk and Opposition Leader Tim Nicholls have both pledged not to govern in coalition with the likes of One Nation and Bob Katter’s Australian Party. So where will that leave the make-up of Queensland’s next government?

On one hand, this election looks set to be a conventional state contest, fought over economic, employment and cost-of-living issues.

With ink still drying on the federal government’s new energy policy, the main parties in Queensland have all made recent announcements playing to voters’ worries of rising power bills.

Campaign attention is expected to focus on regional voters’ concerns – especially in the many marginal seats – over local employment opportunities and industry downturns. Memories are still fresh in and around Townsville of painful job losses from the closure of the Yabulu nickel refinery.

Meanwhile, attracting votes – and Greens preferences – in the state’s southeast corner will be critical. Population pressures have given rise to transport infrastructure projects (like Brisbane’s Cross River Rail) and school building proposals that, in some cases, have become political footballs.

On the other hand, this election shapes as unpredictable and intriguing.

The Adani mine has dominated Queensland’s political landscape – and divided community opinion – like few other recent issues. Party positions on the mine’s approval could prove decisive in many areas.

Similarly, the state and federal governments’ management of the Great Barrier Reef has contributed to volatility in public sentiment.

This, along with the Adani proposal and the state government’s inability to reinstate tree-clearing restrictions, has been an environmental sore point for Queensland’s left-dominated ALP caucus. Negative public reaction has even fed speculation that Deputy Premier Jackie Trad could face a realistic challenge from the Greens in her South Brisbane seat.

Adding to the unpredictability is a handful of “unknowns”. These include the introduction of four-year fixed parliamentary terms, a redrawing of the state’s electoral map from 89 to 93 seats, and the reintroduction of compulsory preferential voting. The latter especially makes predicting results in most electorates fraught with difficulty.

Even the swelling of numbers on the electoral roll (primarily of younger voters) as a result of the national same-sex marriage survey adds an unpredictable element.

The One Nation question mark

On top of all this is the presence of Pauline Hanson’s One Nation.

Since bursting back onto the political stage at last year’s federal election, One Nation’s popularity in its “home” state has again seen the major parties in Queensland and federally jumping at shadows.

It did not go unnoticed when Pauline Hanson recently announced federal-government-funded projects in Ipswich and elsewhere. This reportedly prompted a furious rebuke from federal Nationals leader Barnaby Joyce.

One Nation even enters this election defending a seat, after the defection of former LNP MP Steve Dickson in January this year.

The party’s wildcard quality was made more stark after the announcement that Malcolm Roberts – having had his Senate election ruled invalid by the High Court – would stand in the seat of Ipswich at the state election.

One Nation has variously polled between 10% and 15% across Queensland, even exceeding 20% in some of the 50-plus seats in which it will field candidates.

Regional areas in particular, where high unemployment has fed voter dissatisfaction with the major parties at state and federal levels, is where One Nation’s presence will be felt most. Yet it is uncertain how preferences from the party’s voters will play out in different seats.

What to expect in the campaign

The LNP will focus on government missteps, such as train system malfunctions and ministerial blunders. It will also pursue a message of the Labor government as indecisive and “do nothing”, after ordering numerous reviews and overseeing a stubbornly high unemployment rate relative to the national average.

Voters will be asked whether Nicholls has done enough as opposition leader in the last 18 months to warrant a crack at the top job.

Labor will be keen to remind voters of Nicholls’ role as treasurer in the Newman government, particularly with the electorally poisonous public asset sale agenda and his supposed unpopularity in bush areas.

Ultimately, Palaszcuk will look to benefit from incumbency and her lead as preferred premier. Her Labor team will also benefit from an incumbent federal Coalition government that is dealing with the fallout from High Court rulings that ousted the Nationals’ leader and deputy from parliament.

History may be against Palaszczuk, though: she would be the first female Australian state premier to defend an election win.