Global average carbon dioxide concentrations rose by 0.8% during 2016, the largest annual increase ever observed. According to figures released overnight by the World Meteorological Organisation, atmospheric CO₂ concentrations reached 403.3 parts per million. This is the highest level for at least 3 million years, having climbed by 3.3 ppm relative to the 2015 average.

The unprecedented rise is due to carbon dioxide emissions from fossil fuels (coal, oil and gas) and the strong 2015-16 El Niño event, which reduced the capacity of forests, grasslands and oceans to absorb carbon dioxide from the atmosphere. 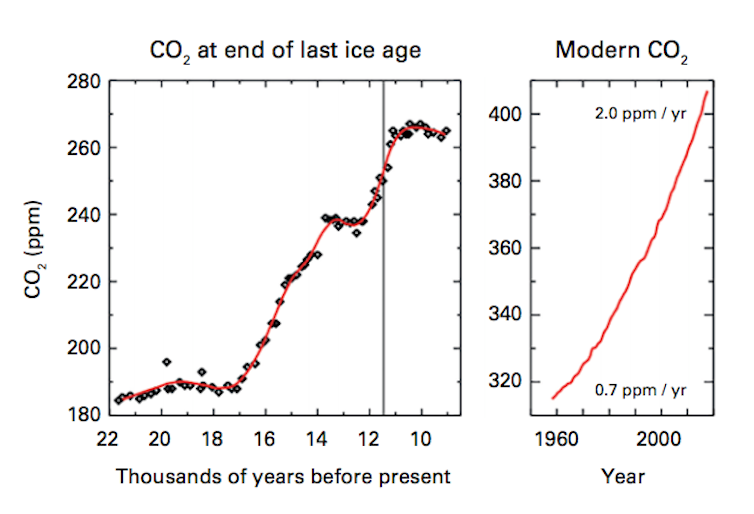 The figures appear in the WMO’s annual Greenhouse Gas Bulletin. This is the authoritative source for tracking trends in greenhouse gases that, together with temperature-induced increases in atmospheric water vapour, are the major drivers of current climate change.

Laboratories around the world, including at CSIRO and the Bureau of Meteorology in Australia, measure atmospheric greenhouse gas concentrations at more than 120 locations. The gases include carbon dioxide, methane and nitrous oxide, as well as synthetic gases such as chlorofluorocarbons (CFCs).

At Cape Grim in Tasmania, we observed a corresponding increase during 2016 of 3.2 ppm, also the highest ever observed.

For 2017 so far, Cape Grim has recorded a smaller increase of 1.9 ppm. This possibly reflects a reduced impact of El Niño on atmospheric carbon dioxide growth rates this year. 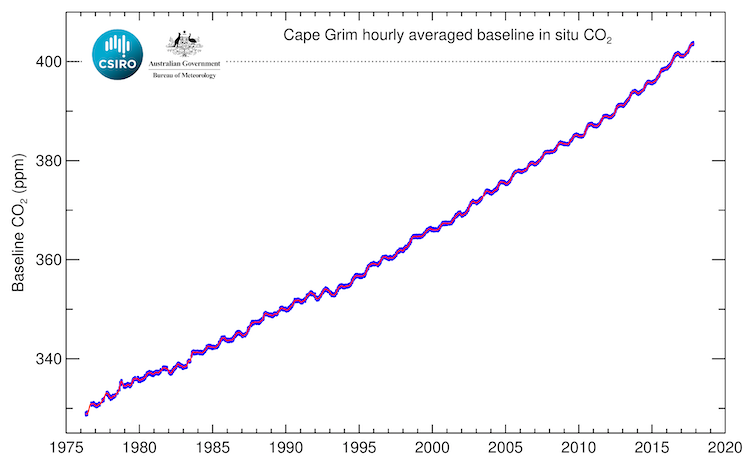 For roughly 800,000 years before industrialisation began (in around the year 1750), carbon dioxide levels remained below 280 parts per million, as measured by air trapped in Antarctic ice. Geological records suggest that the last time atmospheric levels of carbon dioxide were similar to current levels was 3-5 million years ago. At that time, the climate was 2-3℃ warmer than today’s average, and sea levels were 10 to 20 metres higher than current levels.

The extraordinarily rapid accumulation of CO₂ in the atmosphere over the past 150 years is overwhelmingly and unequivocally due to human activity.

Methane is the second-most-important long-lived greenhouse gas in the atmosphere, with 40% coming from natural sources such as wetlands and termites and the remaining 60% from human activities including agriculture, fossil fuel use, landfills and biomass burning.

Nitrous oxide is the third-most-important greenhouse gas, of which [around 60% comes from natural sources such as oceans and soils], and 40% from fertilisers, industrial processes and biomass burning.

Read more: The three-minute story of 800,000 years of climate change with a sting in the tail

If we represent the climate change impact of all greenhouse gases in terms of the equivalent amount of CO₂, then this “CO₂-e” concentration in the atmosphere in 2016 would be 489 ppm. This is fast approaching the symbolic milestone of 500 ppm.

These record greenhouse gas levels are consistent with the observed rise in global average temperatures, which also hit record levels in 2016.

The only way to reduce the impact is to significantly reduce our greenhouse gas emissions. The Kyoto Protocol and the subsequent Paris Agreement are important first steps in a long and challenging process to reduce such emissions. Their immediate success and ultimate strengthening will be crucial in keeping our future climate in check.

The authors thank Dr David Etheridge for his advice on the use of proxy measurements to infer carbon dioxide levels in past atmospheres.