On October 28, Australia ratified the Kigali Amendment to the Montreal Protocol. Australia is the tenth country to ratify, joining others as diverse as Mali, the United Kingdom and Rwanda in a global commitment to dramatically reduce hydrofluorocarbons (HFCs) in the atmosphere. Once 20 countries have ratified the amendment, it will become binding.

If the Kigali Amendment becomes binding, the hunt will begin for a replacement for HFCs and their uses in industry. In a strange twist, the least environmentally harmful option may well be carbon dioxide.

Where do HFCs come from?

HFCs are made of carbon, fluorine and hydrogen. They are exclusively synthetic, meaning they have no known natural sources. To understand why they came into existence requires a quick history lesson.

Throughout the second half of the 20th century, another class of compounds called chlorofluorocarbons (CFCs) were widely used. CFCs are very stable, which made them ideal for many practical uses, including in refrigeration, foam packaging, and even aerosol cans for hair spray.

However, scientists soon discovered that CFCs had a major downside. Because they are so stable, they can survive in the atmosphere long enough to eventually reach the ozone layer. Once there, they break down in sunlight and destroy ozone in the process.

The Montreal Protocol was a global agreement developed to stop this harmful ozone destruction. The protocol mandated a time frame to completely abolish CFCs. To replace them, new compounds were developed that do not destroy ozone: HFCs. 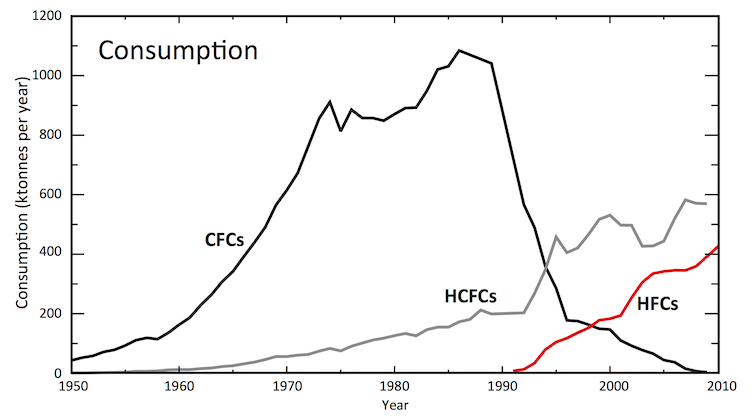 The usage of CFCs and their replacements, including HFCs, since 1950. UNEP 2011. HFCs: A Critical Link in Protecting Climate and the Ozone Layer

But the solution to one environmental problem became the cause of another: these replacements are potent contributors to warming the climate.

Why are HFCs so bad? 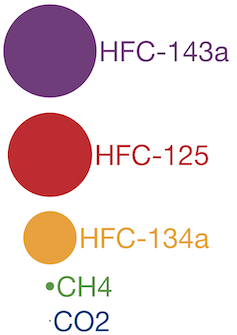 The global warming potentials for the three most abundant HFCs range from 1,370 to 4,180. In other words, these gases trap thousands of times more heat in our atmosphere than an equivalent amount of CO₂.

What will replace HFCs?

The nearly 200 countries that signed the original Montreal Protocol have unanimously agreed that the climate risks posed by HFCs are too significant to ignore. Developed countries will begin phasing out HFCs in 2019. Developing countries will follow suit between 2024 and 2028.

So what will our refrigerators and air conditioners use instead? Several replacements are being considered.

Some groups are promoting another class of fluorine-containing compounds called hydrofluoroolefins (or HFOs). These have a short lifetime in the atmosphere and so pose much less of a climate risk. However, environmental groups have raised concern about the potentially toxic chemicals produced when HFOs break down.

Another option is to use mixtures of hydrocarbons such as butane. Hydrocarbons pose safety risks as they are highly flammable and may also adversely affect air quality. Ammonia is another alternative that has been used as a refrigerant for a long time but is highly toxic.

And, finally, there is the surprise candidate: CO₂. Although using CO₂ as a refrigerant poses technical challenges, it is non-toxic and non-flammable and a much weaker greenhouse gas than the HFCs it would replace. Strangely, from an environmental perspective, CO₂ may actually be the “best” refrigerant available.

A cooler future ahead?

The Montreal Protocol has long been considered one of the greatest environmental success stories of all time. It brought together the world’s governments and chemical industries to protect the ozone layer.

The adoption of the Kigali Amendment will be another feather in the cap of this important agreement. HFCs aren’t overly prevalent yet – but without Kigali they are expected to grow rapidly. By banning them now, we will avoid their impacts before it is too late.

Estimates suggest that phasing out HFCs will prevent up to 0.5℃ of future warming. Even if this estimate turns out to be overly optimistic, getting rid of the HFCs will be an important step towards achieving the Paris Agreement goal of limiting warming to well below 2℃.