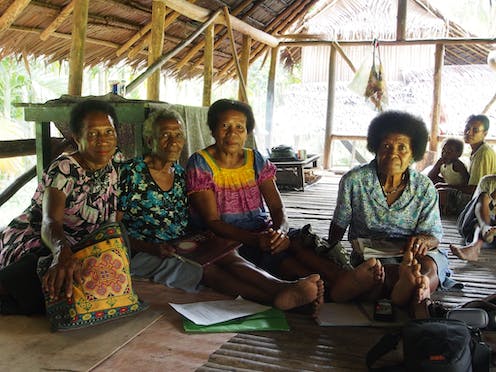 November 2017 marks the 75th anniversary of the end of the Kokoda Track Campaign. The campaign involved a series of battles between Allied and Japanese forces during the second world war, along the mountainous 96km track...

November 2017 marks the 75th anniversary of the end of the Kokoda Track Campaign. The campaign involved a series of battles between Allied and Japanese forces during the second world war, along the mountainous 96km track connecting Kokoda Station, in Papua New Guinea’s Oro Province, with the capital Port Moresby.

“Kokoda” has become iconic in Australian national narratives of the war. Its commemoration most commonly invokes images of Fuzzy Wuzzy Angels, local carriers who assisted Allied forces, and whose relationships with Australian soldiers are frequently described in terms of “mateship” and “brotherly bonds”.

But there is good reason to look beyond these narratives. Feminist historians and scholars of conflict have urged us to be attentive to the effects of wars on women, as well as to the roles they have played even in seemingly impossible circumstances.

Seventy-five years after the end of the Kokoda campaign, the effects of the war on PNG women have been given relatively little attention. Women are barely represented in the popular museum at Kokoda Station, or in the Australian-funded war memorial in the provincial capital, Popondetta.

Since 2015, I have been working with two Oro women, Margaret Embahe and Mavis Manuda Tongia, to record oral history interviews about women’s wartime experiences in the province. Many of our interviewees have been women; others have been men telling stories about their mothers, grandmothers, or other women.

The time that has passed since the war means that the stories we are collecting are often trans-generational ones, passed down from parents to children, or else the direct recollections of people who were children when the war arrived. Dates and details are sometimes fuzzy. Nevertheless, powerful themes are emerging out of our research, which extend and sometimes challenge the ways the war in PNG is remembered.

Where dominant Australian-authored narratives of the war approach Oro Province as primarily a field of combat between two opposing forces, women’s wartime memories remind us that first and foremost it was home to Papuan families and communities. In the coastal areas of Buna, Gona and Sanananda – where the Japanese forces first landed – women tell stories of villages destroyed, families fleeing to the bush to hide, and struggles to feed children when food was destroyed or inaccessible.

The stories that Nester Ewada’s mother and grandmother told her, for example, invoke the strangeness as well as the danger of that time. The planes that arrived overhead with the first landings seemed to them like “big birds”. They watched as the birds “threw out” strange objects – bombs – and then watched in horror as these landed and exploded. It was all they could do to run.

Other stories tell of brutal sexual violence against Oro women. One of our male interviewees, a former governor of Oro, Sylvanus Siembo, recounted the experience of two women who were gang-raped by Japanese soldiers in the Isivita region. When they fought back, the soldiers cut off fingers from each of their hands.

Siembo met the women many years later during his governorship. Both had married local men after the war ended, but in both cases they had continued to endure violence at the hands of their husbands, the product of shame and anger directed at them because of their rapes. Both had, as Siembo described it, “a lifetime of pain”.

Other narratives we have been recording draw attention to the contributions of Oro women to the Allied war efforts. In the Oro Bay area, Tasman Orere’s mother was one of around 60 local women who were laundry workers, washing the uniforms and linen of the Australian and American soldiers. Other women who were resident in a number of resettlement camps established by the Australian forces worked making roof thatching from sago leaves, used in the construction of buildings in the army camps. For some, these experiences were positive, with the camps remembered as safe places where food was plentiful.

As in all contexts of remembrance, the experiences of Oro women do not add up to a cohesive, singular narrative. Rather, these and other wartime memories represent multiple accounts of a complex, transformative time that is remembered in sometimes ambivalent ways.

Australian interest in Kokoda continues to grow, with the numbers of trekkers along the track now averaging close to 4,000 a year. Seventy-five years on from the Kokoda campaign, we have a responsibility to look beyond the dominant narratives of Fuzzy Wuzzy Angels, brotherly bonds and mateship.

Looking for women’s stories in the Pacific War opens our eyes to the domestic spaces within which the war was waged. It draws our attention not only to the 96km of the Kokoda Track itself, but also to the many areas elsewhere in the province and the country that were deeply affected by the war but which have not become hubs of the growing war tourism industry. It reminds us that the war took place in people’s homes, lands and gardens, and it is in these places that its legacies continue to be felt.

Women Remember the War is part of a larger initiative, the PNG Oral History Project, led by Deakin University’s Dr Jonathan Ritchie in collaboration with the PNG National Museum and Art Gallery. The Australian Department of Foreign Affairs and Trade is funding this research through the PNG Governance Facility.