There is no exquisite beauty … without some strangeness in the proportion.

Edgar Allen Poe’s words have a particular irony for me. I am a woman with achondroplasia dwarfism, or what is commonly referred to as “disproportionate dwarfism”. Individuals with my physicality have arms and legs significantly shorter than the average person and thus out-of-proportion to our torso, which is usually of average height.

According to contemporary Western standards of beauty, a woman with such disproportions would not popularly be described as beautiful. The implication seems to be that physical difference and disability cannot be considered attractive.

The representation of female dwarfs in the visual arts mirrors the social attitudes towards people with this physical difference. When dwarfs were viewed positively, such as in ancient Egypt, they were portrayed participating in the full spectrum of life - even worshipped as Gods. But more often, especially in the 20th century, dwarfs have been depicted in the arts in demeaned social roles: comically or as grotesque fairytale beings.

Today, people with dwarfism, and women in particular, are still subject to stigma, stereotyping and discrimination. Pop culture continues some of these problematic representations. The US reality TV show Little Women harks back to the voyeurism of circus founder P. T. Barnum but with an explicit display of female flesh and titillating foibles.

There is also still a clear gender disparity in the depictions of male and female dwarfs. Tyrion Lannister in Game of Thrones is portrayed as intelligent with an acute sense of social justice. Despite Tyrion’s weakness for alcohol, his sexual exploits could not be considered more risque than others in the story-line. While Tyrion is treated seriously and as a character with agency, the women of Little Women seem to be objects of mirth who are shallow.

However a growing number of artists, including myself, are challenging the idea that women with dwarfism cannot be beautiful thanks to their “disability”. In fact, I argue that rather than seeing disability as something inherent to a person we should see it as a product of social and physical environments. 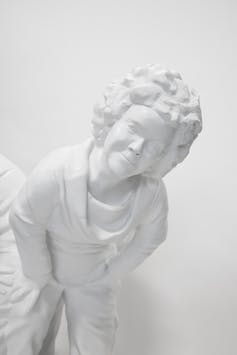 Little Big Woman: Condescension, Debra Keenahan, 2017. Designed and made by Debra Keenahan, Photograph by Robert Brindley., Author provided (No reuse) My own sculptural work represents a style of interaction all too often experienced by people of extreme short stature. That is, being spoken to like a child rather than an adult and an equal. The white marble finish of my sculpture Little Big Woman: Condescension is reminiscent of Greek statues - often considered the epitome of classical beauty.

The three figures in this sculpture are back-to-back, gazing out upon the viewer. Moreover, the work is raised so that a person of average height walks around it and has the experience of always being looked at by the female dwarf. Thus the work reverses what is my daily experience.

I also recently performed in The Big Anxiety Festival’s Awkward Conversations, where I invited people to figuratively walk for 10 minutes in my shoes. By walking the Sydney streets in my company, participants witnessed a variety of public behaviours towards me.

Each performance gave them insight into the dynamics of interaction - sometimes subtle (glances, smirks), sometimes overt (mocking, insults) - that are disabling to a person with dwarfism.

Dwarfism has been a source of fascination for centuries, in writings, paintings, sculptures and photographs. From artworks, anthropologists have established that the ancient Egyptians had two gods (Bes and Besette) who were dwarfs; and that the Mayan Indians fully integrated dwarfs in their culture. However women with dwarfism were largely absent in art until the royal courts of the 15th century.

During this time of royal favour, dwarfs appeared more frequently in paintings. They were granted the prestige and freedom of being allowed to make cynical commentary on court proceedings with relative impunity. Art works capturing the court dwarf either with the royal hound or in the performance of their duties were not uncommon.

One of the earliest painted depictions of a female with achondroplasia was in a fresco by Mantegna during the Italian Renaissance (1474). 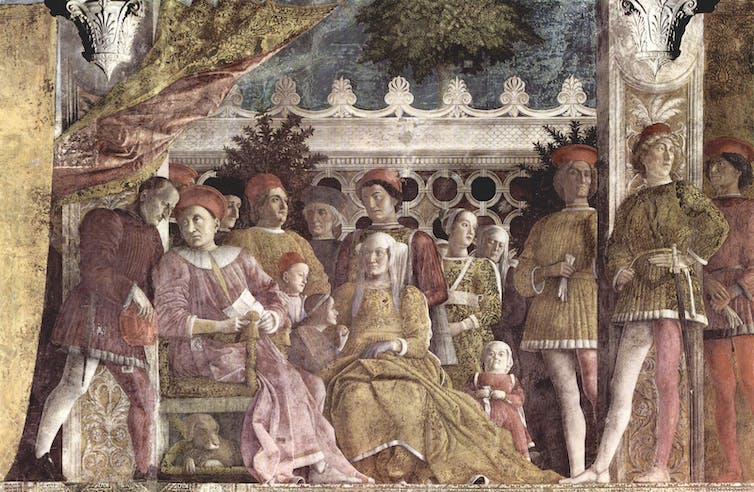 Over the next two centuries, most images of achondroplasia were of men, or of female dwarfs with rarer proportional dwarfism, such as the painting by Frans Pourbus the younger of Isabella, Archduchess of Austria, and her dwarf around 1600.

But undoubtedly, the most prominent representation of a woman with achondroplasia is by the Baroque painter Velazquez in his masterpiece Les Meninas (1656).

Velasquez painted a series of portraits of dwarfs who were members of the Spanish Royal court. Of those works only one other - Prince Balthasar Charles (Carlos) with a Dwarf (1631) - represents a female dwarf, and she is a child.

Both Mantegna and Velasquez’s works clearly communicate the women’s lesser social status. Though they may have been valued members of royal courts and their cynical commentary tolerated, these dwarfs were predominantly amusements, novelties and “pets”. 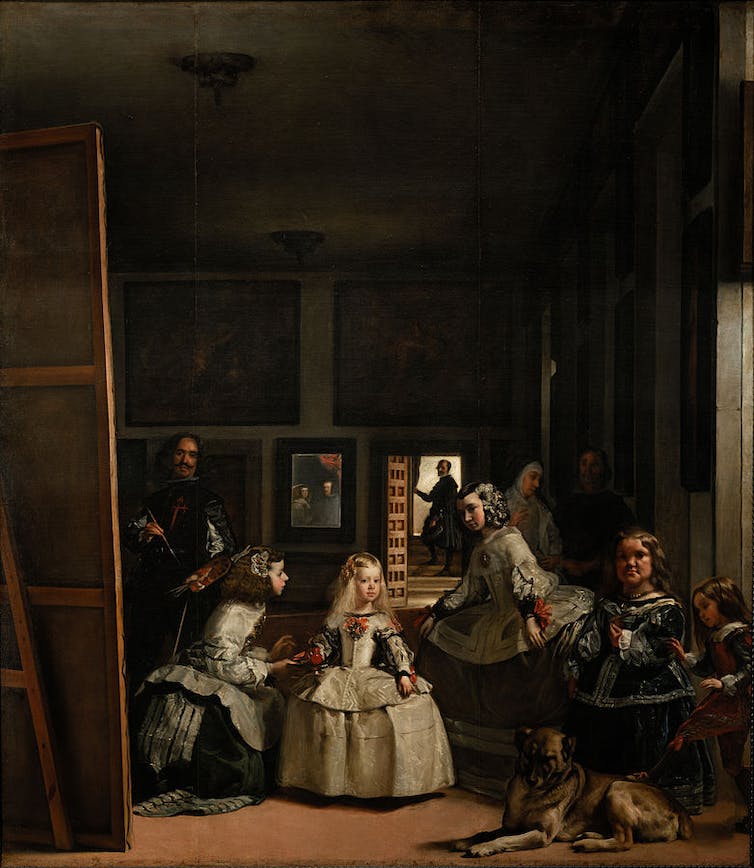 However, these particular artists also present the adult female dwarf employing the “oppositional gaze”. Rather than demurring to the viewer, these women stare back at us, demanding that we take them on their own terms. Unfortunately, such assertive, respectful representation of typically maligned and marginalised people dissipated significantly and quickly soon after.

Throughout the Rococo period in the 18th century there were more paintings of female dwarfs, but these were predominantly portrayed en masse in fantastical and somewhat perverted scenes. The most notable is the series of six paintings by Faustino Bocchi, including Festo dopo le nozze (or “wedding celebration”) and Grotesque Parody of an Accouchement (or “childbirth”). 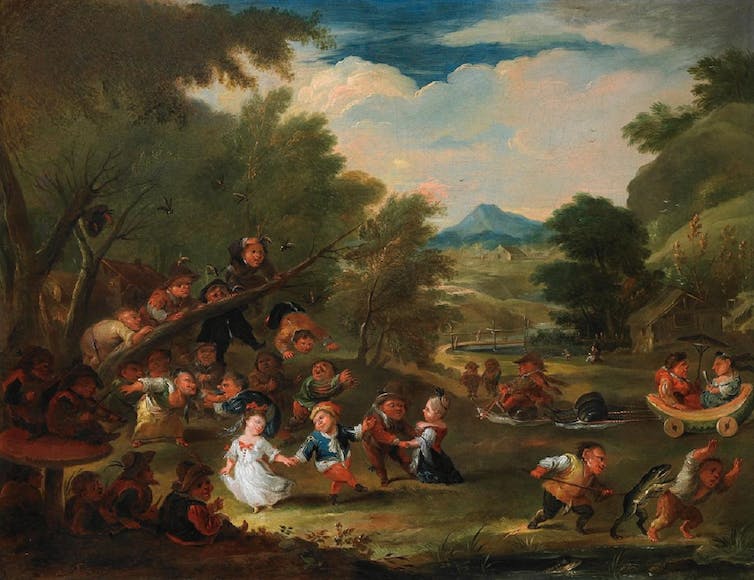 Fascination with people who were physically different became an overt public pastime. The capture of the image of the female dwarf became both a visual record and an opportunity for commercial profit.

The 19th century saw the introduction of photography for public consumption and brought with it an increase in the portrayal of the female dwarf, but with little change in her social status.

During the 19th and early-20th centuries photos were used to promote “freak shows” in circuses. These became an avenue for promoters, such as circus founder P. T. Barnum, to offer dwarfs a living beyond poor houses. In the display of their physical differences, the troupe members were exhibited as passive subjects for the gaze of the paying public.

The promotional banter of the day popularised the term “midget” to refer to someone of short stature - a label today considered deeply offensive and insulting. Moreover, the unabashed publicity of dwarfs focused upon titillating fascination with their private lives and blatant comparisons with the average individual.

Documentary photos subsequently reinforced dwarfs as passive objects of curiosity, whose details about physical proportions and functioning were available for public entertainment - at the mere cost of the entry ticket! For the marriage of Charles Sherwood Stratton (General Tom Thumb) to Lavinia Warren, P. T. Barnum even sold tickets to the reception to the first 5,000 applicants. 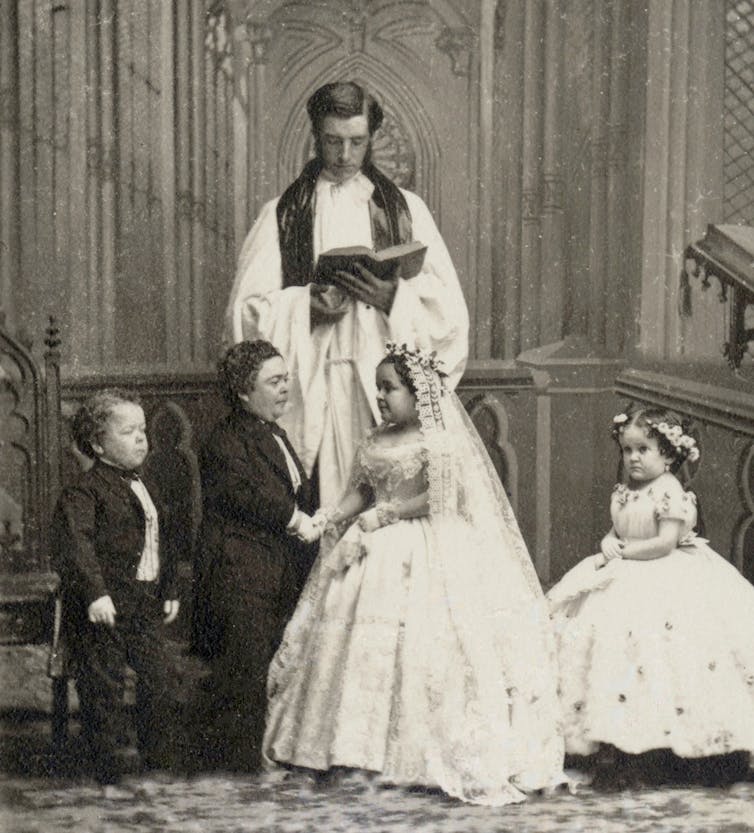 The marriage of Lavinia Warren to Charles Sherwood Stratton. Wikimedia

The images used to promote freak shows clearly emphasised the strangeness of the proportions of the female dwarfs with complimentary concession to the quality of “cuteness”. There was no attempt to present any idea of beauty.

Disproportionate dwarfs did not fare any better with their representations in modern art, where they were juxtaposed with giants, everyday objects or average people. However a new discourse entered the visual narrative - that of the sad, pathetic, ridiculous, isolated, little person.

Famous photographs by Arthur Fellig and Bruce Davidson are the epitome of such stereotyping. The portrayal of women with achondroplasia was virtually nonexistent in this era, with the notable exception of a World War II photo of The Ovitz Family in 1944, a Jewish family imprisoned in Auschwitz and experimented on by Nazi scientist Josef Mengele.

Other artists have explicitly examined the sexuality of the female dwarf, such as the beautifully executed contemporary paintings of Margaret Bowland. Such work typifies the approach of many contemporary photographers and painters who often present these physically unique individuals as on the fringes of society.

In recent years, there has been a critical shift in how disability is viewed - including standards of beauty - drawing on the ever-expanding academic field of disability studies. For myself, I often say that my dwarfism does not disable me, rather, what disables me most is people’s attitudes to it. Because it is negative attitudes that result in unnecessary limitations being placed upon me.

Art can play a powerful role in challenging this ableism - the discrimination of those who are physically or mentally different. Artworks that challenge stereotypes around the physically different can encourage inclusion.

The scholar Tobin Siebers has developed the concept of “disability aesthetics”, which “embraces beauty that seems … to be broken, and yet it is not less beautiful, but more so, as a result”. However I argue that in this definition, Siebers is buying into the subjective beauty/ugly divide that excludes people with disabilities in the first place. 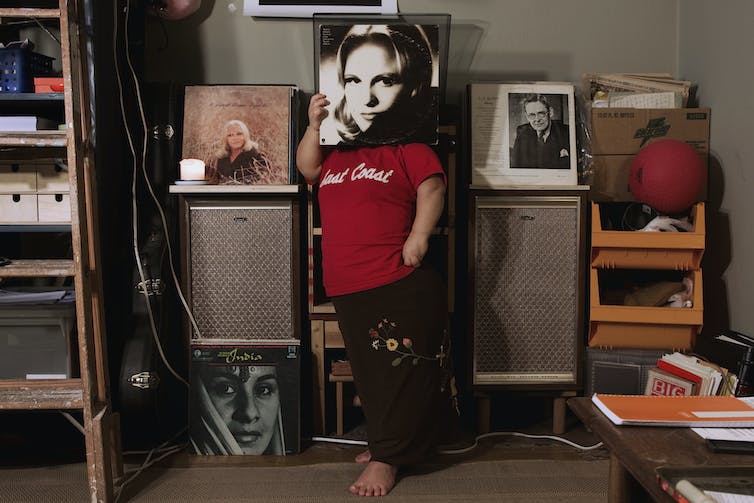 Many contemporary artists with dwarfism, including myself, are changing the conversation altogether, moving from focusing on physical difference to social treatment. Ricardo Gil’s street photography captures the disdain and overt hostility sometimes directed at himself. While his photos do not always depict people with dwarfism, their perspective shows that of a person with dwarfism on the street.

Laura Swanson’s photography parodies society’s exclusion of dwarfs through compositions that strategically remove her individual features from the portraits. Instead, she covers her face and body with everyday objects such as a coat on a hallway stand or an album cover.

The lesson learnt is that how you treat me communicates whether you consider me “a midget”, an amusement, or an equal.