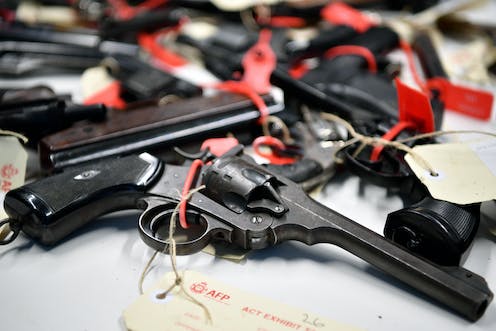 When Australians think about the 1996 gun reforms that followed the Port Arthur massacre, it is usually the big-ticket changes – like bans and “buybacks” – that get the most attention. But, sometimes, small changes can be the most effective at reducing violence, and these are seldom acknowledged.

Although research has examined relationships between changes in the law and gun homicide in Australia, those studies have always looked at how the laws have affected overall homicide rates. The possibility that male and female victimisation might have been affected differently, or by different types of laws, has been overlooked.

For example, laws that prevent domestic violence perpetrators from legally possessing guns would be expected primarily to affect the number of female victims. But other measures – such as restrictions on the types of guns that may be owned – have no “gendered element”. Those laws should affect female and male victimisation equally.

When female and male firearm homicide rates are looked at separately, statistics support one part of this expectation. When pre-1996 female victimisation trends are used to estimate rates into the future, actual female victimisation is lower than what we would have anticipated.

This points to the possible impact of legislative reform on female deaths.

The statistical appearance of change might be due to the low number of female firearm homicide deaths in Australia. Due caution about these results is still required.

However, in contrast to the results for females, no evidence emerged of any significant acceleration in the existing downward trend in male firearm homicide rates. These declined at the same rate before and after 1996.

To better understand how and why the laws might have affected female victimisation levels, it is important to contrast the laws before and after 1996.

It is wrong to think that until 1996 there were few controls over lawful firearm access in Australia. By the early 1990s, all jurisdictions had laws restricting access to adults who were “suitable” or “fit and proper” persons to possess firearms.

Many post-1996 changes simply introduced more detail into the language of existing laws.

For example, all jurisdictions began explicitly identifying domestic and family violence as an offence that would disqualify someone from holding a gun licence. Background checks became mandatory (“must”), rather than discretionary (“may”), as part of the licensing process. Police discretion to suspend or cancel a licence in domestic violence contexts was replaced with automatic suspension/cancellation.

Pre-1996 laws also talked about licence disqualification in terms of a conviction for violence. But the changes recognised there can be many different legal outcomes – such as being found guilty but not having a conviction recorded – which can have implications for practical risk assessment.

These subtle contrasts between Australia’s pre- and post-1996 legislation suggest that items like the introduction of more clarity about how to respond to domestic violence, less leeway for the use of police discretion, and less reliance on courts recording convictions may help explain the greater-than-expected drop in female victimisation.

In Australia, most gun homicide victims (about 80% on average) are male. Contrary to the expectation that some impact should be apparent on male victimisation, it seems the long-running decline in male firearm homicide rates was largely unaffected by changing laws. Deaths continued to fall at the same rate after 1996 as before.

The reasons are not entirely clear. However, it is possible the changes did not strongly affect the ability of high-risk individuals to illicitly access firearms. Given the majority of firearm homicide offenders in Australia are unlicensed, this provides a plausible explanation for why the reforms do not appear to have affected male victimisation rates.

This also raises questions about what type of policies may be most effective for reducing levels of male victimisation. International reviews flag the worth of measures such as comprehensive, collaborative, community-based strategies focused specifically on high-risk areas and individuals.

However, Australia seems to struggle with discussing male homicide victimisation. It is a complex problem with no easy solutions. Policy responses seldom tackle the external influences on violence, such as developmental, social and economic circumstances.

Although it’s helpful to know about specific measures that may help reduce female firearm homicides, the idea that domestic violence perpetrators should not have guns is hardly rocket science.

Nor is this unique to Australia: even in the US, substantial declines in female firearm homicide deaths have occurred after steps are taken to keep guns out of the hands of abusers.

What these findings do bring home is the value of looking not only at which laws may – or may not – affect lethal violence, but also how, why and for who.

Perhaps most crucially for policy development, they tell us that the scope and complexity of law reform is not always related to the impact that change may have.