Today’s mass shooting at a small Baptist church in the small Texas town of Sutherland Springs highlights the role of pro-gun advocates in blocking the progress of effective gun control.

Such advocacy often reflects the persuasive power of “issue management” – a communication process that enables organisations to isolate public issues and steer them in a direction that suits their interests. In the case of the terrible mass-shooting in Las Vegas, the NRA turned a potential PR disaster into a near-triumph.

This approach has been used since the early 1980s, when issues management was developed as a strategy to help US businesses compete on an equal footing in setting the social agenda. It was soon adopted around the world by governments, non-profits, community groups and activist organisations.

Usually it’s pretty transparent who’s managing the issue and trying to persuade the public, the government or some other decision maker.

For example we know broadly who is trying to convince us to vote for or against same-sex marriage, or to support or oppose the Adani coal mine, or to join the campaign to ban duck-shooting in Victoria.

But sometimes it is much less clear. A case in point is the television campaign purportedly launched by Australian convenience-store owners to oppose plain packaging of cigarettes, which turned out to be funded by Big Tobacco. 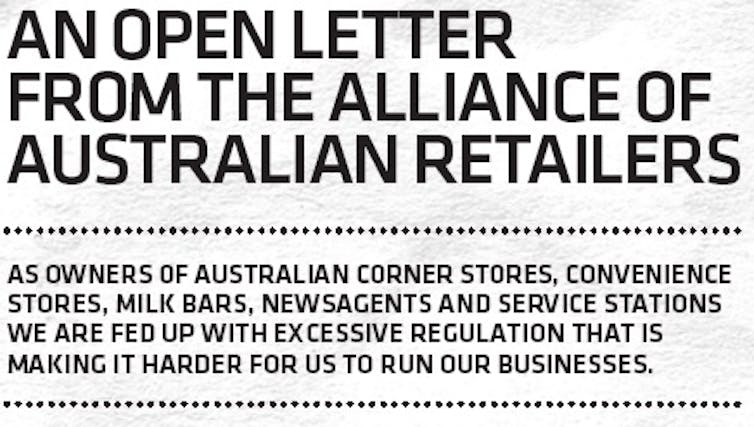 A section of the advertisement that appeared in the Australian media that was actually partly funded by the tobacco industry.

In fact some of the most effective issue management is only partly visible to the public, and in some cases is never seen at all in the mainstream media.

Conversely, there are rare occasions when a major controversy is fought out almost entirely in the headlines and the issue management is laid bare for all to see.

Whatever you think of the National Rifle Association you have to give them credit for some highly effective issue management. In the wake of the shooting rampage in Las Vegas, they could have dusted off their usual response after every previous mass shooting.

But instead, the plotters at NRA came up with an audacious new approach – they called for a review of the so-called bump stocks, which are devices retrofitted to turn a legal semi-automatic weapon into an illegal automatic killing machine.

Bump stocks allow the gun to fire faster than you can manually pull the trigger, which is how the Las Vegas shooter could fire so many shots in such a short time. 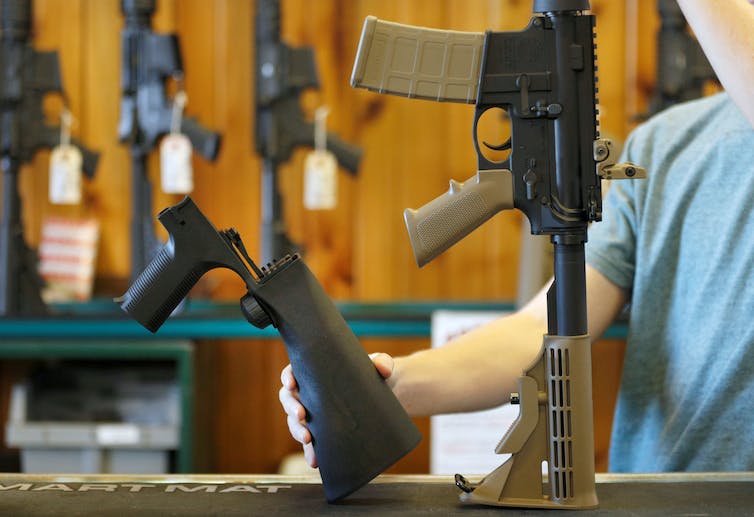 A bump fire stock that attaches to a semi-automatic rifle to increase the firing rate. Reuters

In issue management terms, the NRA’s strategy was a classic case of “look over here” while maintaining its devotion to its core objectives.

By seeming to give away something that is peripheral to the gun rights issue, the NRA implemented a perfect example of the tried and true “issue diversion tactic”. In doing so, it positioned itself as part of the solution, rather than as a key part of the problem.

The long and short of it

While some issue management campaigns are very long-term - like the decades-long tussle over cigarette sales - there are also occasions when the issue management strategy seems to be a short-term initiative explicitly designed to influence the media headlines (such as the NRA campaign).

Commentators and reporters in the US and elsewhere rushed to express amazement that the NRA was actually “supporting gun control”. Headlines around the world hyped a minor concession on bump stocks into an apparently substantive change of direction.For example, ABC America headlined it: “Las Vegas shooting leads to first signs of movement in gun control stalemate” and The Orange County Register trumpeted: “Gun control war dramatically changes with GOP, NRA agreeing to regulations.”

Overall the NRA’s strategy produced a real media win, placing itself at the centre of claimed reform. At the same time the group also achieved political success.

Republican politicians were predictably quick to embrace a call for “sensible regulation” which they could endorse without alienating their gun-rights-endorsing voters.

Even anti-gun Democrats had little choice but to support the proposal, thus delivering a faux image of bipartisanship, with the NRA appearing as honest broker.

The NRA’s plan was an ingenious win-win for them – though not for actual gun control.

The art of issue management

Issue management is a serious discipline taught in universities and practised in boardrooms around the world.

It can be used by a corporation to persuade the government and the public to accept construction of a new toll road, or by the government to encourage childhood vaccination. Or it might be used by a non-profit to increase funding to combat aboriginal inequality, or to drive domestic violence onto the national agenda.

Yet issue management has always had its critics, who claim it is often just a mask for manipulation and everything that is bad about public relations.

There is a large body of literature and evidence to refute this assertion, but some controversial cases undoubtedly give strength to the critics who claim it is all about “dirty tricks,” like the example of Big Tobacco’s “hidden” campaign against plain packaging of cigarettes.

Whatever you think of the NRA, their response to the Las Vegas tragedy was a lesson in well executed issue management - and we can expect them to use a similar strategy in response to today’s tragedy. It’s just a shame that such strategic audacity wasn’t applied in support of a more worthy cause.