Late in the afternoon of a hot spring day, November 21, 2016, a thunderstorm from the northwest swept over Geelong and Melbourne, triggering the world’s most devastating thunderstorm asthma epidemic.

The scale and impact of this unparalleled public health emergency took Victorians by surprise. Thousands of people began, almost simultaneously, to experience breathing difficulties, because stormy winds and moisture can break up pollen into particles small enough to enter the airways.

Through valiant efforts by the ambulance service, hospital networks, general practitioners and pharmacists, the vast majority of thunderstorm-affected patients were successfully treated. Tragically, ten people died, and their deaths are now under coronial investigation.

Of the ten thunderstorm asthma epidemics reported in Australia, seven were in Melbourne. This highlights the city’s vulnerability to unique interactions between particular types of thunderstorms and springtime grass pollen exposure. But other temperate regions around Australia where grasses are cultivated for animal feed have also experienced thunderstorm asthma, such as Wagga Wagga in New South Wales. Thunderstorm asthma events may be influenced and potentially worsened by emerging changes in climate.

During the past year, government, universities, peak professional bodies and non-government organisations have worked collectively to review the event, understand the factors behind thunderstorm asthma, and implement plans to prevent a repeat of this tragedy.

Who’s at risk and what should they be doing?

Advice to patients and health care professionals on understanding and managing the risk of thunderstorm asthma is now available. The documents focus on the biggest risk factors: those who have hay fever and asthma.

In Australia, the biggest risk factor for thunderstorm asthma has been termed the “ryegrass pollen trifecta”. That is, sensitisation to ryegrass pollen, springtime hay fever, and exposure to high levels of ryegrass pollen on the arrival of the thunderstorm. Ryegrass is one of the most common grasses in southern regions of Australia. In Victoria, ryegrass pollen levels are highest between mid-October and late December.

While it’s tempting for people to trivialise hay fever, the condition can be serious, debilitating and chronic. Most people with hay fever manage their condition by taking antihistamines. They should also speak to their pharmacist or GP about using daily steroid preventer nasal sprays, which modify the disease process.

Patients with severe hay fever symptoms can be referred to an allergy specialist. In those whose condition can’t be managed by other medications, allergy specialists may recommend allergen-specific immunotherapy. This controls and treats the underlying allergic inflammation.

Read more: Keeping one step ahead of pollen triggers for thunderstorm asthma

For thunderstorm asthma protection, the National Asthma Council of Australia recommends that people with hay fever in locations at risk of thunderstorm asthma carry an asthma puffer, available at any pharmacy without prescription, or know where they can easily get one. 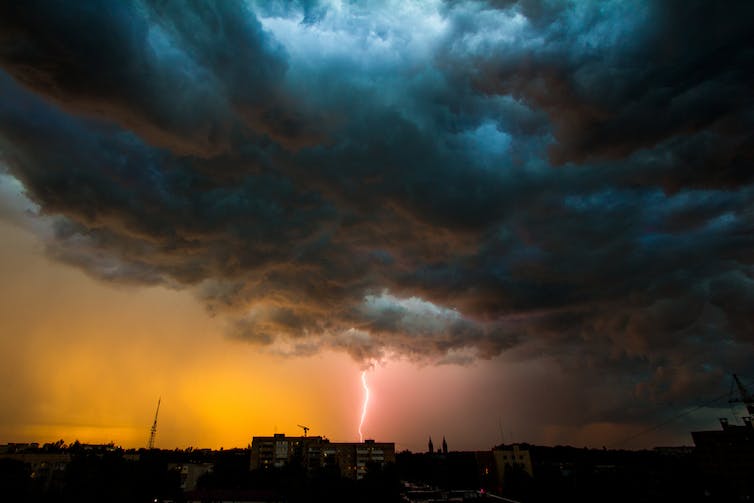 Many of those affected were outside before or during the thunderstorm. from www.shutterstock.com

At even higher risk of thunderstorm asthma are people with hay fever and known asthma. It’s important for them to seek medical review, update their asthma action plans and, if prescribed regular preventative medication, to take it regularly.

Of greatest concern are those with hay fever but who also experience symptoms of breathlessness, cough, chest tightness or wheezing during spring with their hay fever. They may have undiagnosed asthma and are particularly vulnerable to thunderstorm asthma, as they have not been prescribed asthma preventers or trained to manage their asthma. Media campaigns are now underway to alert such individuals of their need for medical consultation.

Read more: Pollen counting is not something to be sneezed at

Are there tests to tell if you’re at risk? 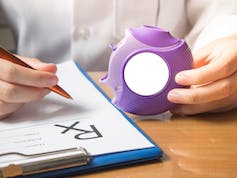 People with asthma should protect themselves with regular preventer use. from www.shutterstock.com

GPs can arrange blood tests to confirm whether a person is sensitised to an allergen. This blood test measures levels of a specific antibody to an allergen source, such as ryegrass pollen. Subtropical grass pollens (such as Bahia and Bermuda) are also abundant and relevant in parts of Australia.

Patients referred to an allergy specialist may undergo skin prick testing to identify the allergens to which they are sensitised. Droplets of allergen extracts are placed on the skin and a small skin prick allows the allergen to penetrate the outer layer of skin. In patients sensitised to the allergen, a small red, swollen mark forms around the site within a few minutes.

A person who is not sensitised to ryegrass pollen (by either blood or skin prick testing) is very unlikely to experience thunderstorm asthma in Australia.

Should those at risk be watching the weather?

Most patients affected by thunderstorm asthma last year were outside, or inside with open windows, at the onset of the storm. Therefore, people who may be vulnerable to pollen allergies and thunderstorm asthma should be aware that exposure to weather and environmental conditions can lead to exacerbation of symptoms. During high-risk periods, they should stay indoors with all windows shut.