The high concept television comedy The Good Place follows Eleanor (Kristen Bell) who seems to have made it into heaven, or rather, “the Good Place” by mistake. In heaven, she is paired with her assigned soulmate Chidi (William Jackson Harper), a moral philosophy professor. It is through Eleanor and Chidi’s interactions that the show encounters age old philosophical questions of what it means to be a good person.

The tone of the series is established in its first episode, when Eleanor is informed by an apparent bow-tied angel, Michael (Ted Danson), that “you, Eleanor Shellstrop, are dead. Your life on earth has ended, and you are now in the next phase of your existence in the universe”. Eleanor replies, “Cool, cool. I have some questions … How did I die?”.

Only the select few make it to the Good Place. But the series reveals that not only was Eleanor’s death rather ignoble, but that she also behaved unethically while alive, knowingly selling useless medication to the sick and elderly. Chidi embarks on a mission to teach Eleanor ethics, and his lessons span much of the first season. 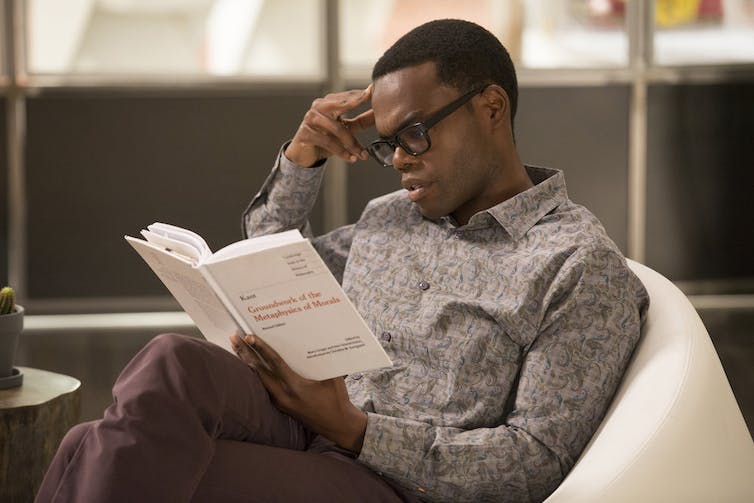 Moral philosophy professor Chidi brushes up on his ethics in The Good Place. NBC/Justin Lubin/IMDB

One of the show’s charms is the way it draws on real philosophers and philosophical dilemmas. By trying to teach Eleanor ethics, Chidi’s situation echoes a problem developed in some of Plato’s dialogues, namely whether a person who rejects morality can be reasoned into being moral.

In answer to this problem, Chidi cites Aristotle’s idea that virtue could be learned like a musical instrument, namely through active practice. While practice doesn’t exactly make perfect in Eleanor’s case, she does become more considerate and principled, which provides the series with a narrative arc. But her steep learning curve still makes Chidi wonder whether he is doing the right thing and in the process we encounter other moral philosophies.

Indeed, Chidi’s dilemma regarding Eleanor can be framed as a choice between Utilitarianism and Kantian ethics. Chidi even draws up a list of ethical considerations on the blackboard - which includes utilitarianism - and rereads Immanuel Kant’s The Groundwork of the Metaphysics of Moral (1785).

Roughly speaking Utilitarianism, developed by the English radical philosopher Jeremy Bentham (1748–1832), holds that the greatest good is the greatest happiness for the greatest number. From this perspective, Chidi should expose Eleanor to save the suburb from chaos.

But Kant’s reasoning begins from the premise that the only indisputable good is the good will, and that an ethical action is derived from good will. This means that we have a duty to act in an exemplary way and never treat people as a means to an end, regardless of the outcome. The Kantian approach rejects the Utilitarian view that people can be reduced to numbers in a happiness equation, which means that Chidi would be wrong to abandon Eleanor. In Chidi’s words, “If all that matters is the sum of the total of goodness then you can justify any number of bad actions”.

It is delicious to watch the trolley problem become a gag in an episode in the show’s second season. Michael (the so-called “architect” of the Good Place) is trying to understand human ethics, and tests Chidi by creating a simulation of the problem. Clicking his finger, Michael renders Chidi the driver of a tram, forcing him to decide whether to stay on course resulting in the deaths of five people or kill one.

In Michael’s words, “I made the trolley problem real so that we could see how the ethics would actually play out”. In so doing, Chidi is subjected to gruesome blood splatter as the tram crushes people. 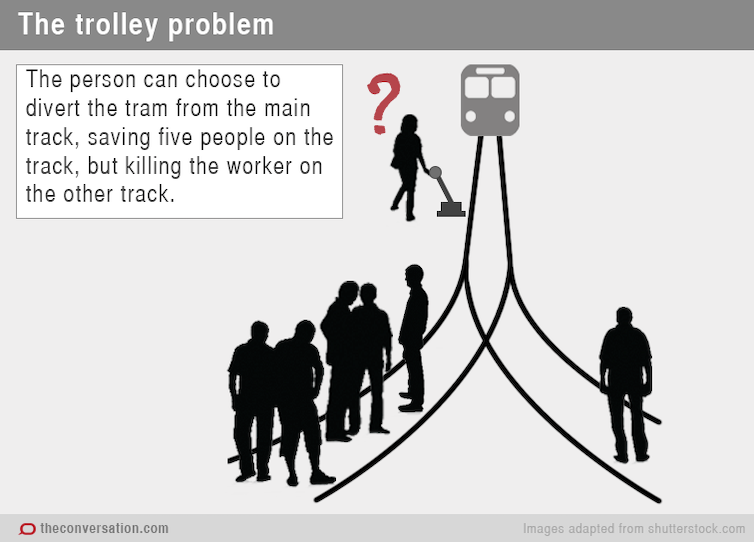 One possible criticism of thought experiments like the trolley problem is that it removes the reality from choice making and thereby abstracts our moral decision making. The Good Place, despite its fantastic setting, gives thought experiments some sense of reality, and shows how the sometimes dry field of moral philosophy makes use of rather quirky scenarios that even recall melodrama. By incorporating these and other moral dilemmas into the plot, The Good Place is an engaging, funny and surprisingly accessible introduction to moral philosophy. The Good Place can be seen on Netflix.