In the race to adopt electric vehicles, Australia is sputtering along in the slow lane. Rather than growing, Australian sales of electric cars are actually in decline. In 2016 they represented just 0.02% of new car sales – even lower than in 2013.

Contrast that with Norway, the country with the highest levels of electric car adoption. Almost 30% of new cars sold there in 2016 were electric.

Read more: How electric cars can help save the grid

Why are Australian motorists rejecting electric cars while those in other advanced economies are embracing them? As the National Roads and Motorists’ Association (NRMA) has previously pointed out, high vehicle prices are an obvious barrier. But that is only part of the answer.

Our current research, in which we used online questionnaires to survey Australian motorists’ attitudes to electric vehicles, suggests that a comprehensive network of recharging stations, particularly on popular intercity routes, is essential to encourage drivers to go electric. This seems to be even more important than subsidising the cost of the cars themselves.

Rechargers on highways, in country towns and at service centres need to be fast and convenient, so that motorists aren’t unduly delayed. Without the right charging infrastructure, there is no foundation to allow Australian motorists to go electric with confidence.

The average Australian motorist drives 36km per day for all passenger vehicles (see table 8 here). This is well within the range of modern fully electric vehicles – more than 150km for the models on sale in Australia – and actually less than Norwegians, who drive more than 40km a day on average.

Norwegian drivers also enjoy the highest proportion of rechargers in the world. But on another criterion the world leader is Estonia. It’s credited as the first nation to build a country-wide network, with a recharging station every 50km on major roads, and one in every town with a population of at least 5,000.

Every country that has successfully adopted electric cars has done so by providing an effective recharging network. But we can learn from what has gone wrong in some of these places too.

Our research suggests that governments need to ensure that recharging stations work for motorists, rather than just for the network providers. Recharge points should have standardised fittings, easy payment options such as credit and debit card facilities, and prompt maintenance – all features of existing fuel stations.

Imagine if you could only fill up with petrol by pre-registering with a network, such as Caltex or Shell, and making sure you had paid in advance before taking a long trip. It sounds ridiculous, but that is the situation electric motorists face in some places.

Britain has multiple subscriber-only recharging networks, which frequently have chargers that are out of order. Recently, sales of fully electric vehicles have stagnated and it has only been a surge in sales of plug-in hybrids that boosted sales to 1.45% in 2016, up from 1.09% in 2015. 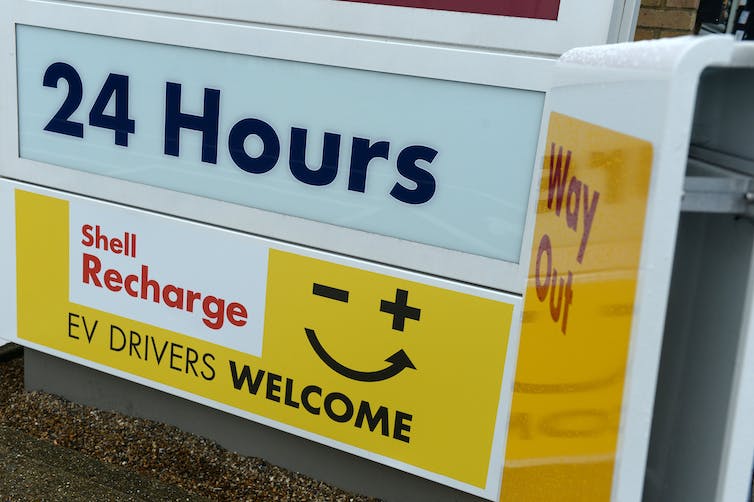 California has solved that problem by introducing legislation to ensure that motorists don’t have to join a network and can pay for the electricity by credit card. As a result of this and other measures, such as privileged lane access and support for workplace recharging, electric cars now represent 4.8% of Californian car sales, far outstripping the US average of 0.9% in 2016.

Another Californian law ensures that the 40% of Californians who live in rental properties can recharge their cars at home. As Australians are increasingly living in high-rise developments, ensuring car parks have the capacity to recharge cars overnight will be critical. The technology exists to enable separate billing for each car, so making sure strata management allows installation will be essential for people in units and flats to adopt this low-polluting technology.

Introducing such legislation will be a necessary first step. China recently announced that it is working towards a timetable to end production and sales of internal combustion engine vehicles. It’s a good example, which Australia would be wise to follow.

This will be critical if we are to reduce transport-related emissions, toxic air pollution and noise, and improve our fuel security in the face of increasingly unstable geopolitical circumstances and our growing dependence on imported fuel.

Read more: End of the road for traditional vehicles? Here are the facts

Without an adequate recharging network, Australian motorists risk being left in the rear-view mirror as the rest of the world’s drivers go electric. With electric cars forecast to reach price equivalency with petrol cars by 2025, we need to help Australians overcome their anxieties about running out of charge before they reach their destination.

Governments can do this by mandating a comprehensive open-access recharging network to speed the uptake of electric vehicles. We won’t be able to fix the problem overnight but we have to get started. There is no shortage of other countries to look to for ideas.

This article was coauthored by Gail Broadbent, a postgraduate researcher at UNSW’s School of Biological, Earth and Environmental Science.