The Queensland Labor government’s change back to compulsory preferential voting could increase informal voting and actually backfire, with a strong flow of Pauline Hanson’s One Nation preferences to the Liberal National Party.

What appeared to be a masterly, if cynical, move from Labor now looks far from smart. This is especially so as opinion polling shows a strong flow of One Nation preferences to the LNP, making it the beneficiary of full preferential voting.

Paradoxically, Labor preferences may assist the LNP in some rural seats where One Nation comes second to the LNP. One Nation, which looks set to win a few seats, will itself be helped by preferences from Katter’s Australian Party and also from the LNP.

The difference between optional and compulsory preferential voting

In April last year, Queensland parliament increased the number of electoral districts from 89 to 93. This move, initiated by the LNP with the support of crossbench members, was trumped by Labor, also with crossbench support. Labor amended the Bill to additionally re-introduce compulsory preferential voting.

The introduction by Labor of compulsory full preferential voting owed nothing to democratic electoral theory. Like all previous voting system changes, Labor expected to get some advantage.

The return to full preferential voting will actually increase the number of informal votes. An informal vote is a ballot paper where the voter has failed to put a number every box, or otherwise not complete it properly.

Compulsory, or full preferential, voting requires an elector to number every box beside each candidate on the ballot paper sequentially in order of the voter’s preference. If no candidate achieves a majority of “1” votes on the first count, the candidate with the lowest number of votes is eliminated from the ballot, and their votes allocated to the remaining candidates according to the eliminated candidate’s second preference.

This process continues until one candidate reaches a majority (50% plus one) of votes. The aim is to elect the most preferred candidate, rather than the simple plurality required under first-past-the-post voting. 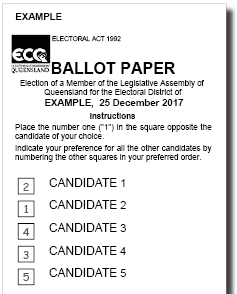 This system maximises choice for voters, ensuring that they don’t have to indicate any preference for someone they don’t wish to elect. Optional preferential voting therefore seems like the most democratic form of voting.

On the other hand, full preferential voting arguably maximises the democratic principle of public participation, by ensuring that voters’ second (and so on) preferences pass on to other candidates. Their votes are therefore not wasted. So, elections more accurately reflect the will of the people, as the winner can claim the support of most voters.

Under optional preferential voting, if large numbers of electors limit their preferences to one candidate, someone without majority support may be elected.

What history tells us

The real reason for a return to full preferential voting was to assist Labor in garnering preferences from the Greens. These preferences typically flow heavily to Labor – as high as 80% in many cases.

However, optional preferential voting meant that Greens voters increasingly just voted 1 for their own candidate, robbing Labor of votes. ABC election analyst Antony Green calculated that had full preferential voting been in place in 2015, Labor would have won an additional eight seats and an absolute parliamentary majority.

Labor also hoped to pick up preferences from other candidates in order to stave off Greens challenges in inner-city districts.

The optional preferential voting experience in Queensland shows that over time, the proportion of the electorate not stating full preferences generally increases. Academic John Wanna warned of a defacto first-past-the post system, calling it a “denial of a true democratic outcome”.

In 2012, 70% of electors voted 1 only. This proportion fell to 55% in the 2015 election, apparently due to disaffection with the Newman LNP government, when many voters deliberately put the LNP last on the ballot paper.

In 2016, Labor appeared in a winning position with the change to compulsory preferential voting. 2017 is different.

The difficulty in predicting the outcome of Queensland’s state election is compounded not just by changes to the electoral system, but by volatile political factors.

Chief among these is the resurgence of support for One Nation. In the 2015 election, standing in only 11 electorates, the party garnered a statewide vote of less than 1% – though Hanson herself lost narrowly to the LNP in the seat of Lockyer.

Recent opinion polls suggest support for One Nation at around 18%, prompting commentators to assign it a “kingmaker” role in a likely hung parliament.

So it’s impossible to gauge the impact of a return to compulsory compared with optional preferential voting with certainty. In most seats, it won’t change the outcome.

However, some seats will likely be decided differently under full preferential voting. In a close election, that can determine which party wins on 25 November.

Ironically, given the LNP’s vehement criticism of the change to full preferential voting last year – it was the ‘death of democracy’, according to one parliamentarian – they are likely to be the main beneficiary of the changed system.