This latest scandal for the brand highlights the growing tension about the standards of sexual depiction considered acceptable in advertising.

Advertising in Australia is governed by a self-regulatory system in which a variety of codes are administered by the Advertising Standards Board. The board claims to represent community standards by appointing board members that represent a diverse cross-section of Australian society.

“Exploitative and degrading” depictions are not allowed under section 2.2 of the Australian Association of National Advertisers code of ethics, but questions remain about the adequacy of how these codes are interpreted and policed.

The lag time time between an advertisement being placed through media channels and the complaints process being followed means that the damage has already been done even if an advertisement is deemed to violate the code.

Companies are well aware of this, and often exploit this loophole as a way of generating further publicity for their brand. And as the case of Wicked Campers demonstrates, companies are not compelled to abide by the Advertising Standards Board’s decisions and can resume to business as usual, thereby calling into question the effectiveness of the process itself. 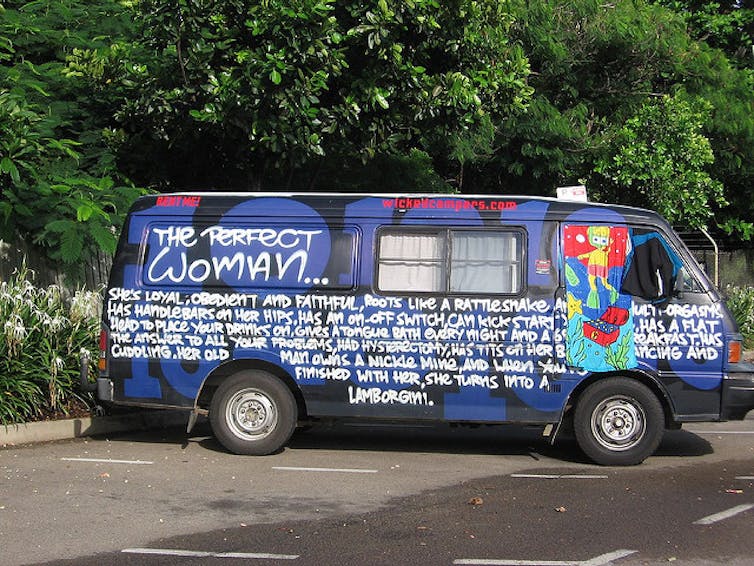 Wicked Campers continue to draw criticism for their overt sexism - but many are still allowed on the roads. Flicker/CC, CC BY

Honey Birdette is able to walk a finer line than most as the Advertising Standards Board must consider the relevance to the product of any sex or nudity that is used in an advertisement. As a lingerie brand, it is of course able to depict women wearing its products.

Past rulings dictate that such a portrayal will not be considered degrading if the woman is depicted in a “positive light” – such as being “confident and in control” – and her pose is “not overly sexualised”.

Apart from such criteria being highly ambiguous, they play into the questionable sexual empowerment for women in being represented as beautiful but sexy, sexually knowledgeable or practised and always “up for it”.

The power of advertising

As research highlights, advertising is a powerful representational authority in society that propagates certain ideas about women.

Advertisements often create expectations about how people of a certain gender should look or act, which in turn can serve as sources of learning about how women should be understood and treated. As a result, certain gender roles and stereotypes are harder to challenge.

The Australian group Our Watch (a project established to drive nationwide change in the culture, behaviours and power imbalances that lead to violence against women and their children) has devised a Change the Story framework.

This framework calls out the need for advertisers to address the influence of pornography on social norms relating to gender and relationships across society in addressing the problem of violence against women and children.

Although advertising does not seem to have evolved at the same pace as society, action is on the horizon. United Nations Women have recently identified advertising that promotes gender stereotypes as a key obstacle in the path towards gender equality.

This year Paris City Council has banned sexist outdoor advertisements, recognising their power to incite men’s violence against women. Advertisements that undermine the status of women are increasingly attracting the ire of consumers from all walks of society, who are able to mobilise a collective voice through online petitions and grassroots activist organisations.

Change from within the advertising industry

Recently, we have witnessed the rise of brands taking the issue of gender representation seriously. For example, Unilever has taken a stand to eliminate gender stereotypes in its advertising, whether questioning beauty ideals through Dove or toxic masculinity through former gender offender Axe.

Audi’s Superbowl advertisement ended with the tagline “Audi of America is committed to equal pay for equal work.” Female led agencies, such as Badger and Winters, have made a stand to no longer objectify women in advertisements, producing work for lingerie brands that celebrate women as opposed to reducing them to pornified decorative objects.

The rising power of female consumers is changing the advertising landscape.

Its age old mantra that “sex sells” and associated harmful practices are becoming increasingly offensive and redundant. A new breed of advertising is proving that in 2017 consumers expect better. Those advertisers that ignore this shift risk damaging both their reputation and their profit margins.

This Audi advertisement that played at the 2017 Super Bowl took a stand against gender pay inequality.