During the late spring, corals on the Great Barrier Reef release little balls that float to the ocean surface in a slow motion upside-down snowstorm.

These beautiful events are studied avidly by scientists: the tiny bundles will become young corals, and unlocking their secrets is vital to the continuing life of our coral reefs.

Mass spawning after the full moon

Coral species have a varied sex life. The majority of species are simultaneously male and female (hermaphrodites) and typically pack both eggs and sperm (gametes) into tight, buoyant bundles that are released after dark with remarkable synchronisation. The bundles float to the surface and open, allowing the eggs meet compatible sperm.

Less commonly, some coral species have separate sexes, and a few species even release asexually produced clones of themselves. For all species with sexual reproduction fertilised eggs develop into mobile larvae that settle on the sea floor and become polyps: the beginning of a new coral colony on the reef.

Mass spawnings are spectacular events, in which dozens of coral species release their gametes at specific times. Sometimes more than 100 species spawn on a single night, or over a few successive nights.

Read more: Feeling helpless about the Great Barrier Reef? Here’s one way you can help

This iconic celebration of sex on the reef was first described in the central Great Barrier Reef in 1984 by a group of early-career scientists. The discovery earned them a prestigious Australian Museum Eureka Award for Environmental Research in 1992.

The precise timing of this seasonal phenomenon is linked to seawater temperature, lunar phases, and other factors such as the daily cycle of light and dark. Mass coral spawning is the dominant reproductive mode for corals on the Great Barrier Reef, and has also been recorded on reefs around the world.

The release of egg and sperm bundles is the culmination of many months of development. In years when the full moon falls early in October and November, many colonies are not quite ready and delay spawning for another lunar cycle. That’s why this year will see some action in November and another mass spawning event after the December full moon.

An important date in the scientific calendar

Spawning can be replicated in aquarium settings, which provide unique opportunities to researchers. All three of us work in the Australian Institute of Marine Science’s (AIMS) unique Sea Simulator, where large numbers of coral larvae are produced for scientific experiments.

Scientists from the Institute and around the world work through the spawning nights to collect gamete bundles, separate sperm and fertilise the eggs, then rear millimeter-long larvae and juveniles. Many experiments continue for days, weeks and even years to address critical knowledge gaps in how corals respond to and recover from stress.

Corals reefs are at a crossroads, but there is still hope. Experiments during this year’s spawning season will test whether surviving corals from recent bleaching events are naturally adapted to warmer reef temperatures, and if they produce more heat-tolerant young.

Read more: The Great Barrier Reef can repair itself, with a little help from science

This knowledge underpins the development of active reef management tools such as assisted gene flow. 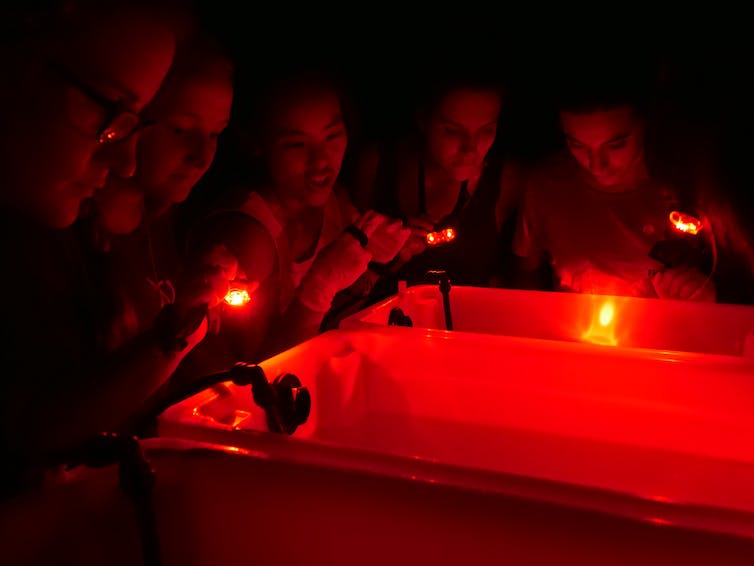 Assisted gene flow involves moving heat-tolerant corals (or their young) to reefs that are warming. This technique proposes to improve the overall heat tolerance of local coral populations, to help the buffer the reef against future bleaching events caused by warmer than normal water temperatures.

More local threats to corals include poor water quality and pollution from coastal development. The early stages of a coral’s life are very sensitive to exposure to pesticides, oil spills and sediments from dredging.

Carefully controlled experiments with aquarium-reared coral larvae provide insights into the role of these local pressures on the rate of recovery and replenishment following large-scale disturbances.

The present reality for coral reefs is one of increasing strain from climate change, cyclones, crown-of-thorns starfish predation, and declining water quality. The ability of coral reef ecosystems to recover from these challenges relies on the success of mass coral spawning both on the reef and advances in the laboratory to generate new options to enhance reef resilience.

Exploring reef restoration and adaptation needs to go hand-in-hand with ongoing (and increasing) efforts in conventional management, such as climate change mitigation, regional management of water quality and control of crown-of-thorns starfish.