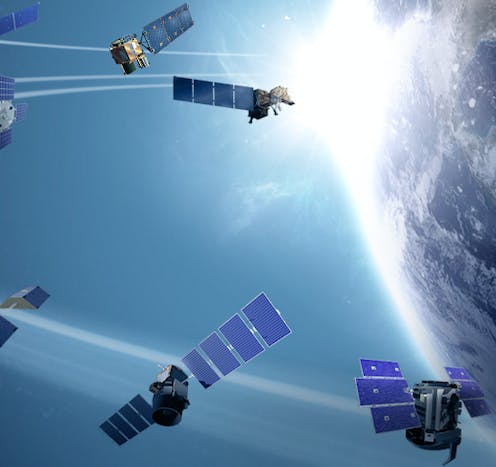 Right now there are around 21,000 artificial objects being tracked in Earth orbit (and many millions too small to be tracked). Only about 1,750 of these are functional satellites.

If we don’t adequately manage the traffic of objects in outer space, many services on which we depend will no longer be available.

I argue that Australia should step up and fill this role. “Space traffic management” could be an enduring, national beacon project to inspire and galvanise the Australian space industry. This will be particularly important as the prospective Australian space agency builds momentum in 2018.

Read more: Yes, Australia will have a space agency. What does this mean?

The US is stepping back

Non-functional orbiting objects are known as space debris. It’s an ongoing problem and only likely to become worse, with plans to add many thousands of small satellites to the current population of active satellites.

Right now, the US Air Force is trying to divest itself of the space traffic management role – a responsibility that it has previously assumed for the world by default. The US Federal Aviation Administration has said that it is willing to take this on, but there are many issues to resolve, including control over assets, finances and human resources.

There’s a fair amount of debate about the scope of space traffic management. At the very least it encompasses a means of knowing:

It could also encompass an advisory, or even directive, service to satellite operators to avoid collisions and avoid contributing to the existing space debris population. That implies that space “rules of the road” may be established.

Of course, satellites cannot physically stop at “intersections”, like we see in traffic management on Earth. But we could see development of means to actively prevent collisions, for example, by changing the orbit of space debris. That might be by another space object capturing and physically moving the space debris, or it could be done remotely, such as by a ground-based laser using photon pressure.

While Australia already has an active space industry, it is thinly spread. Government departments and agencies, universities, contracted aerospace companies (mostly large and foreign), local start-ups (mostly small) and some established Australian companies, all currently make up Australia’s participation in the space industry.

Now that an Australian space agency has been announced, a key focus of the national space agency will be coordinating what already exists.

In respect of managing space traffic from Australia, here are some capabilities we already have.

Tracking sensors. Australia has a growing number of sensors for tracking objects in space, including C-Band radar, Space Surveillance Telescope and space object laser tracking. Australian companies such as Saber Astronautics have been developing the means to “mine” the enormous amount of space-related data from radio astronomy sensors, notwithstanding that these were not originally designed with space traffic management in mind.

Moving debris. The Space Environment Research Centre is exploring how lasers for space object tracking based in Australia could be used for moving space debris at risk of colliding with active satellites. It also conducts other research to improve the quality of orbital predictions.

Read more: Trash or treasure? A lot of space debris is junk, but some is precious heritage

Australia’s reputation. Australia has a strong reputation in respect of air traffic management and search and rescue – we provide these services for more than 11% of the Earth’s surface by ourselves.

Historical and positive role in space. Australia has been active in the Committee on Peaceful Uses of Outer Space since its inception in 1959. Australian initiatives are given serious consideration by the international community, without the political polarisation that our superpower ally, the USA, can draw.

Australia is therefore not only well suited to contribute to space traffic management in a physical sense, but also in a regulatory sense – including facilitating the establishment of an appropriate regulatory regime.

Both myself and others have advocated for the global strategic importance of normalising the space environment. This involves establishing regular and predictable patterns of behaviour through legal rules and less formal practices and procedures. It is also a matter of national strategic significance.

An international space regulator is almost certainly going to emerge in the next decade and is likely to have some sort of gatekeeper function, including ensuring safety and sustainability in space through effective space traffic management.

Whichever nations play an active part in this role stand to gain significant international influence, and also significant commercial opportunities. This is particularly important with the impending launches of mega-constellations whose operating satellites must be protected.

Australia can and should have a key part in global space traffic management.