And even if you pay nothing to download the app in the first instance, features such as cosmetic upgrades, pay-to-win features and “loot boxes” might tempt you to commit real dollars to progress through stages or levels for success.

Concern is growing in Australia and other countries that such features are normalising gambling behaviours for game users, including children.

The Victorian Commission for Gambling and Liquor Regulation has reportedly confirmed that it is “aware of the issue of loot boxes” and is in the process of assessing their legal status and the potential dangers they pose.

Read more: How the video gaming industry is evolving to be like the casino industry

Developers and publishers of mobile games are making serious money. Pokémon Go is estimated to make between US$1.5 and US$2.5 million per day, and the average spend per player for 11 of the most popular mobile games is more than US$100.

Mobiles and tablets now provide 42% of the revenue in the global games market, and are estimated to exceed 50% by 2020.

Discussions about micro-transactions in games recently came to a head with the consumer uproar about features in Star Wars Battlefront II, developed and published by Electronic Arts. 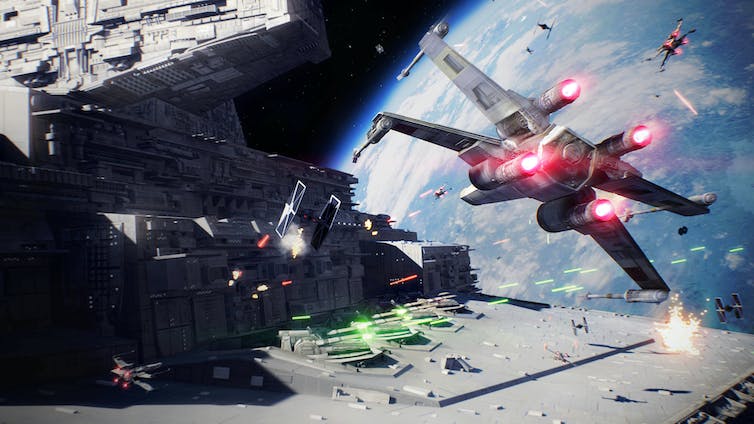 Despite costing A$99.95 in Australia, Battlefront II also uses micro-transactions that allow players to pay real money for in-game “crystals”. These can then be traded for advantages in the game’s competitive multiplayer network.

Early estimates based on the pre-release trial period suggested that if a player does not want to spend money on these micro-transactions, it could take close to 40 hours of playing to unlock and play as a hero character like Luke Skywalker.

Unlocking all the game’s heroes with crystals would cost as much as $955.

Of particular focus in this uproar has been the “loot box” mechanism. In exchange for paid crystals or for credits earned during game play, players can buy “crates” that randomly grant advantages. Fans calculated that it would require almost three hours of gameplay to earn a basic crate.

Pressure is mounting to regulate digital games for children.

Gamer and writer Heather Alexander wrote an honest reflection on her own gaming experiences with loot boxes and other features, saying

I have a gambling problem. I didn’t find this out at a casino. I found this out playing games.

She describes loot boxes as “predatory in design” and “made to dazzle, delight, and encourage repeat purchases”.

In response to growing attention, Electronic Arts announced that it has removed the micro transactions feature from Battlefront II.

But it’s in mobile games where gambling mechanisms like loot boxes are nearly ubiquitous, often overlooked, and potentially most problematic.

The first Angry Birds could be purchased for as little as $0.99, and involved simple skill-based play to destroy structures using birds in a slingshot. The game was later made available for free, but with in-app purchases.

This model saw Angry Birds established as one of the biggest video game brands in the world.

In comparison, Angry Birds 2 features seven core monetisation mechanics that revolve around “gems” bought with real money. The exchange rate on these gems improves if you buy in bulk, up to A$32.99 in one go. These can then be spent on loot boxes (or “chests”), in the game’s daily double-or-nothing game (so you still win, even if you lose), as well as on other in-game upgrades.

Even with these features, the Apple app store advertises Angry Birds 2 as suitable for ages 4+.

The 2018 Digital Australia report reported that 90% of Australian children aged between 5 and 14 play digital games.

We need to consider whether the presence of gambling mechanics like loot boxes and virtual currencies in games may be normalising gambling behaviour in young people.

Earlier this year, Christopher Hunt from the University of Sydney’s Gambling Clinic reported in The Conversation that,

the numbers of 18-to-25-year-old men with problems related to sports betting doubled between 2012 and 2015.

While Hunt suggests gambling ads could be to blame for this rise, future research should examine the role that gambling in games is having on these increases in problem gambling with young people.

These trends also present a serious problem for the video game industry at large. While they are successful at increasing revenue in the short term, low-quality, pay-to-win games was one of the causes of the 1983 North American video game industry collapse as consumers turned away from digital games.

It is unsurprising then that the most vocal opponents of loot boxes in Star Wars Battlefront II are the series’ most passionate fans.

In response to the Battlefront II controversy, various gambling regulators and legislators in Australia, France, Belgium and the United States are calling for action to reverse this trend.

In Australia, this may be a role for the Australian Classification Board, which could ensure that games that feature predatory gambling mechanics receive an R18+ rating.

Alternatively, Australia might want to look to China, which has taken a lead in regulating loot boxes. Since May 1, digital game publishers have to reveal the win rates of loot boxes to give players more knowledge about what they are really paying for.

In either case, further research is needed to understand the impact that gambling mechanics in games - as well as gambling-play more broadly - have on young people’s beliefs about gambling, as there is not yet a demonstrated link between gaming and gambling.