Australia seems on the brink of embracing space in a coordinated manner, but how should we do it?

The reports examine Australia’s existing space capabilities, set them in the light of international developments, and identify growth areas and models for Australia to pursue. The promise is there:

While it is not the first time the government has commissioned this type of research, the updates are welcome given the fast pace of space innovation. Taken together they paint a picture of potential for the future of Australian space and a firm foundation for a space agency.

The rules of the game

The Global Space Industry Dynamics report from Bryce Space and Technology, a US-based space specialist consulting firm, sets out the “rules of the game” in the US$344 billion (A$450 billion) space sector. 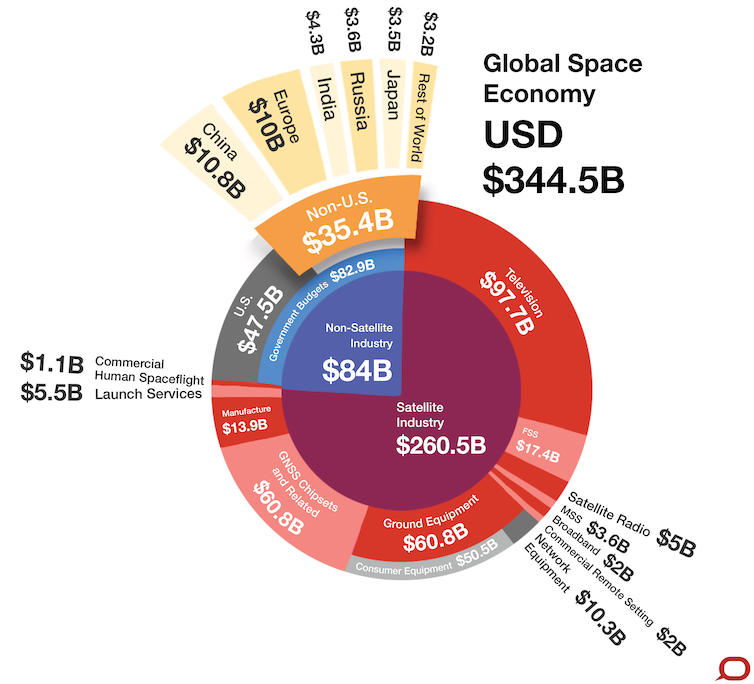 The global space economy at a glance. Figures are from 2016, and shown in US$. Marcella Cheng for The Conversation, adapted from Global Space Industry Dynamics Research Paper by Bryce Space and Technology, CC BY-NC-ND

The report also looks at the emerging trends that a smart space industry in Australia will try and run ahead of. Space is becoming cheaper, more attractive to investors and increasingly important in our data-rich economy. These trends have not gone unnoticed by global competitors, though, and the report describes space as an increasingly “crowded and valuable high ground”.

What is particularly useful about the report is its sharp focus on the three numbers that determine commercial attractiveness:

The magic comes through matching these attractive sectors against areas where Australia can compete strongly because of existing capability or geographic advantage.

The report adds the speculative area of space mining as an additional sector worth considering given Australia’s existing terrestrial capability.

Read more: Space mining is closer than you think, and the prospects are great

There are also emerging Australian capabilities in small satellites and potentially disruptive technologies with space applications, like 3D printing, AI and quantum computing. The report notes that basic research is strong, but challenges remain in “industrialising and commercialising the resulting products”.

Australian universities made cubesats for an international research project.

The concern about commercialisation prompts questions about the policies that will help Australian companies succeed.

Should we embrace recent trends and rely wholly on market mechanisms and venture capital Darwinism, or buy into traditional international space projects?

Do we send our brightest overseas for a few years’ training, or spin up a full suite of research and development programs domestically?

Are there regulations that need to change to level the playing field for Australian space exports?

Learning from the world

Part of the answer is to be found in the third report, Global Space Strategies and Best Practices, which looks at global approaches to funding, capability development, and governance arrangements. The case studies illustrate a range of styles.

The UK’s pragmatic approach developed a £5 billion (A$8 billion) export industry by focusing primarily on competitive commercial applications, including a satellite Australia recently bought a time-share on.

A longer-term play is Luxembourg’s use of tax breaks and legal changes to attract space mining ventures. Before laughing, remember that Luxembourg has space clout: satellite giants SES and Intelsat are headquartered there thanks to similar forward thinking in the 1980s. Those two companies pulled in about A$3 billion of profit between them last year.

Norway and Canada show a middle ground, combining international partnerships with clear focus areas that benefit research and the economy. Norway has taken advantage of its geography to build satellite ground stations for polar-orbiting satellites, in an interesting parallel with Australia’s longstanding ground capabilities. Canada used its relationship with the United States to build the robotic “Canadarm” for the Space Shuttle and International Space Station, developing a space robotics capability for the country.

The only caution is that confining the possible role models to the space sector is unnecessarily limiting. Commercialisation in technology fields is a broader policy question, and there is much to learn from recent innovations including CSIRO’s venture fund and the broader Cooperative Research Centre (CRC) program.

As well as the three reports, the government recently released 140 public submissions to the panel.

There is no shortage of advice for Dr Clark and the expert reference group; appropriate given it seems an industry of remarkable potential rests in their hands.