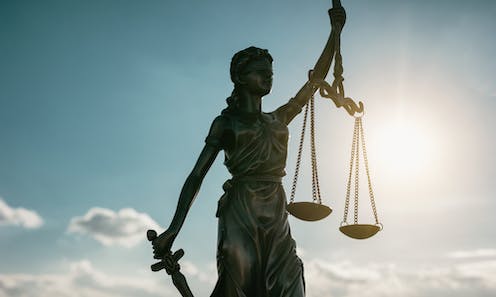 In 2005, a comprehensive package of “trendsetting feminist … reforms” was introduced in Victoria, including a new offence of defensive homicide. Sitting between murder and manslaughter in terms of legal and moral culpability, a person could be convicted of defensive homicide rather than murder if they killed with the genuine but unreasonable belief that they were acting in self-defence.

It was considered a controversial offence, subject to two government reviews before its abolition in November 2014.

The decision to abolish defensive homicide fitted neatly into the then-Liberal government’s tough law and order agenda. The dominant voices in the debate claimed the offence was being used and “abused” by “violent thugs”.

Often cited as a primary example is the case of Luke John Middendorp, who killed his female ex-partner. This narrative emerged despite Middendorp being the first and only male convicted of defensive homicide for killing an intimate partner, and despite numerous women’s and family violence advocates desperately campaigning to retain the offence. They did so because it was found to be providing a “safety net” option for women who killed in response to family violence.

In particular, the offence recognised that women often encountered difficulty establishing their offending as self-defence (for example, when the victim was killed while asleep), but their offending warranted a conviction less than murder.

In Victoria, the mental impairment defence provides a finding of not guilty by reason of mental impairment (NGMI). But this defence is very (and necessarily) restrictive, used in about 1% of higher court cases.

In the past 16 years, a finding of NGMI in homicide cases has occurred exclusively where the primary diagnosis was schizophrenia. It has never been used for an individual with a cognitive impairment.

This is because the test requires the accused to not understand either the nature and quality of their conduct, or that their conduct was wrong. This in turn means “the vast majority of people with serious mental illness … fail this test”.

Due to the disproportionate rates of mental illness among homicide offenders, it is important there are appropriate legal avenues to respond to this type of offender in a way that captures their legal culpability, while recognising the reduced moral culpability. Defensive homicide achieved this.

The focus on “men getting away with murder” leading up to defensive homicide’s abolition shut down any nuanced inquiry into the immediate and extended impacts of its removal. This has left Victoria as the only state other than Tasmania without a “halfway house” between murder and manslaughter.

Defensive homicide did not negate the legal responsibility of accused persons, nor did it mean they avoided punishment. Rather, it offered an opportunity for the law to determine the extent to which the offender was morally culpable for his/her conduct. In this way, it allowed for the lower moral culpability of offenders, where relevant, to be taken into consideration in both the type of conviction recorded and the sentence imposed.

Having an alternative offence that can capture these circumstances doesn’t mean all offenders with a mental impairment or who kill in response to prolonged abuse will have a guilty plea accepted by the prosecution, or be found guilty of the lesser offence at trial. Indeed, despite the controversy surrounding defensive homicide, safeguards were in place to prevent misuse. And the offence was used rarely – with the majority of mentally impaired offenders found to be within the reach of ordinary law.

In the absence of defensive homicide, the law in Victoria is fundamentally constrained in its ability to determine criminal culpability according to degrees of impairment and abuse. This matter of degree is important, as it appropriately reflects the circumstances of the offender and the offence.

The current all-or-nothing system lacks the sophistication necessary to provide appropriate defences (or offences) that recognise the reality of the complex conditions and circumstances of homicide. The law requires greater flexibility to deal with homicide offences.