Inflammation has a major impact on our health and quality of life. It’s the trigger behind many chronic diseases and a growing burden affecting health care across the globe. But what is inflammation? And what causes it?

Quintessentially, inflammation is the swollen, red, sore, hot area around the rose thorn embedded in your finger, or the pain and swelling around the ankle you sprained coming down the stairs. In these situations, inflammation is very obvious and uncomfortable. But it’s doing its job to protect us by aggressively recruiting the immune system to ward off or fight infection or respond to tissue damage.

When immune cells on patrol detect a bug or a “danger” signal, they send out an array of chemicals. Some are designed to kill invading bugs while others, called cytokines, recruit other immune cells to the site. The permeability of blood vessels increases to enhance access to the site.

So the redness, swelling and pain are due to an influx of cells and fluid, as well as some unfortunate collateral damage to our local tissues in the heat of this battle.

Our finger or ankle will return to normal as the signs of inflammation wane over days or weeks. This is because inflammation is programmed to stop. Chemicals released by immune cells at the site deliberately switch the battle from an attack phase to a healing phase to return our tissues to normal after the danger has passed.

Often people will also take “anti-inflammatories”. These don’t necessarily disrupt the healing process but reduce the side effects such as pain and swelling.

So inflammation is one of our most ancient forms of defence and it works rapidly and efficiently to protect us in many situations.

What can go wrong?

The failure to turn off inflammation in chronic disease has dire, painful and debilitating consequences, as patients with rheumatoid arthritis or inflammatory bowel disease will readily agree.

In these inflammatory diseases, the normally reliable “on/off” chemical controls of inflammation are disrupted. This means inflammation continues instead of being stopped, or it is unleashed inappropriately at sites such as joints or in the gut, wreaking havoc as it damages our own tissues. Without the important “off” signals, our immune cells keep letting out damaging chemicals and killing our own cells, even in the absence of any microbial threat.

We now know inflammation is unleashed in many circumstances and in an increasing number of common, chronic diseases. Our modern society is replete with inflammation triggers. These can be found in cigarette smoke; pollutants in our air, water or food; our gut microbiomes; and in mental cues, such as stress.

As a result of our environment and lifestyles, we now live constantly with low levels of inflammatory signals “arming” our immune systems. This is a silent menace, not causing the usual overt signs of inflammation, but nevertheless complicating other disease processes that may be present.

Ageing can also reduce the stringency of our inflammation controls. Inflammation is now recognised as a significant cause or complicating factor in diabetes, obesity, cancer, depression and heart disease. 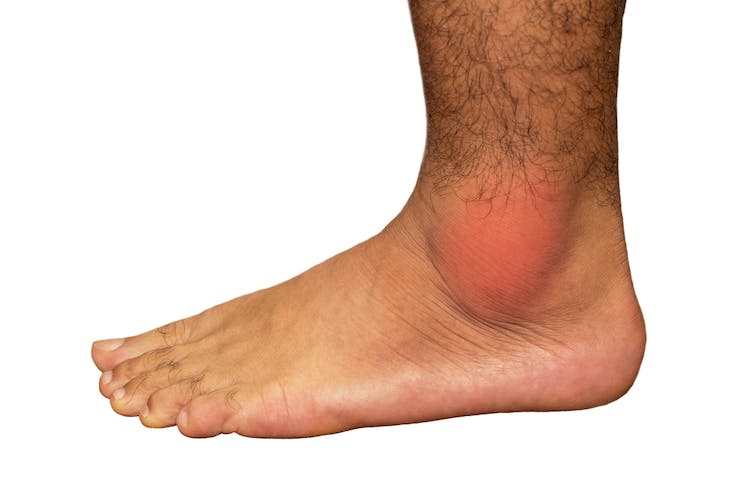 Inflammation should know when to turn off. from www.shutterstock.com

What diseases can inflammation cause?

Recent research suggests inflammation might also cause neurodegenerative diseases such as Alzheimer’s and Parkinson’s. In a large-scale genetic study that compared people with and without Alzheimer’s disease, many of the DNA changes occurred in genes associated with inflammatory pathways. This implicates inflammation as either causing or responding to the condition.

A study earlier this year made headlines by showing that reducing inflammation with a specific drug provided significant protection against recurring heart attacks and also reduced the incidence of lung cancer in smokers.

Read more: Anti-inflammatory drug cuts risk of heart attack and lung cancer – but at what cost?

How can we treat inflammation?

While we can take steroids or anti-inflammatory medications to suppress some instances of acute inflammation (such as your sprained ankle), in chronic diseases we need to know which parts of the inflammatory pathway should be boosted or dialled down at different stages of disease. So we need to find a way to balance our immune response, rather than simply enhancing or muting it.

Research is giving more information about the normal regulatory pathways that turn inflammation on and off. This has already resulted in some very successful treatments that target specific inflammatory mediators in arthritis, bowel diseases and other conditions.

These treatments have often used antibodies to target and block inflammatory mediators (cytokines). This has been very successful at suppressing unwanted inflammation in some patients. Recently identified proteins in immune cells are now also being targeted to develop additional treatments for inflammatory bowel disease in patients who do not respond well to cytokine-targeting drugs.

Incredibly, unlocking the on/off secrets of inflammation with new research (and hopefully drugs) will be the key to controlling this underlying menace in many diseases and providing new treatments for many patients.