With Christmas looming, many people will be considering what present to buy for their children, nieces and nephews, grandchildren and friends. Soon, if not already, we will be reading lists of the top trending presents for 2017. These lists will no doubt include, and may even be totally dominated by, all the latest gadgets and devices.

The purpose of these lists is to attempt to persuade parents of young children if they want to give their child the best start in life, and all the advantages for doing well later at school, they need to purchase the latest technology.

Read more: ‘Digital play’ is here to stay … but don’t let go of real Lego yet

Missing from these Christmas lists, but what should actually be at the very top in terms of learning, are blocks. Blocks have been part of children’s play for a long time. But there’s still no other toy that compares in promoting all areas of children’s development. Any early childhood teacher can easily identify all the areas block play develops including fine motor, social, language and cognitive skills.

As children experiment by stacking, balancing, or building with blocks, they need to share, respect other children’s constructions, ask for desired blocks and describe what they are creating. Perhaps more importantly, children develop problem solving skills, creativity and imagination in creating their masterpieces. Finally, let’s not forget persistence where children try again and again to build the tallest tower or most elaborate castle. 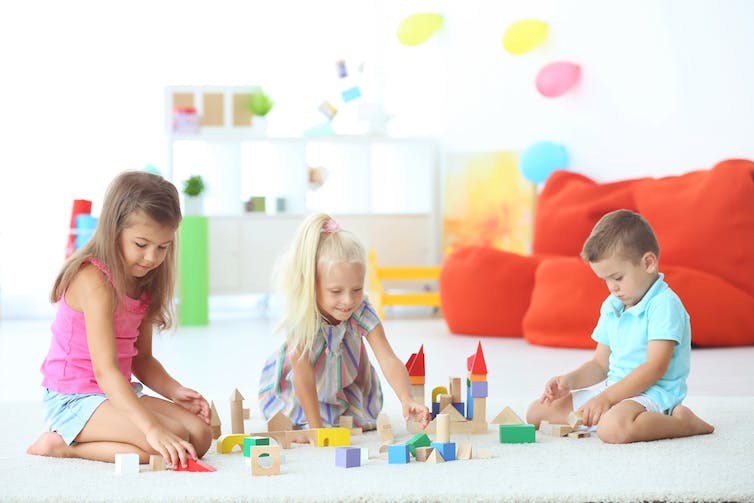 Kids learn to play and work together when using blocks. Shutterstock

Less well known is that blocks also foster spatial reasoning. Spatial reasoning is the ability to mentally manipulate objects or to think in a way that relates to space and the position, area, and size of things within it. We use spatial reasoning skills in everyday life when we read maps, pack the car for holidays, assemble flat pack furniture or cut cake into equal slices.

Spatial reasoning skills are linked to mathematics skills. Children who have good spatial skills tend to have better maths skills. Many people are unaware of the research, but early mathematics skills are a better predictor of later school success than either early reading or social-emotional skills. Block play helps children understand many mathematical concepts in number, measurement and geometry. During block play children count, measure, estimate, pattern, transform, and learn about symmetry.

Perhaps most surprising to readers will be the research that shows spatial reasoning skills are the best predictor of whether children will end up in a Science, Technology, Engineering and Mathematics (STEM) related career. Spatial skills are especially important in STEM related jobs where people are required, for example, to create or read X-ray and ultrasound imaging, engineering and architectural designs, or cross sections of heating and plumbing systems.

Block play also fosters spatial language. When children play with blocks they hear and produce more words related to spatial reasoning including things such as beneath, above, next to, behind, and so on.

One study showed block play elicited more spatial language than any other type of play. The other types of play included playing with puppets, playing house, shops, school, zoos, chefs and throwing a ball.

Other research that looked at spatial language showed the more spatial words children heard, the more spatial words they produced and the better they performed on spatial tasks. In this study, researchers looked at language relating to the spatial features and properties of objects such as the dimensions of objects (such as how big small, wide, tall), the forms of shapes (for example rectangle, circle, square) and other spatial properties (like bent, pointy, curved). 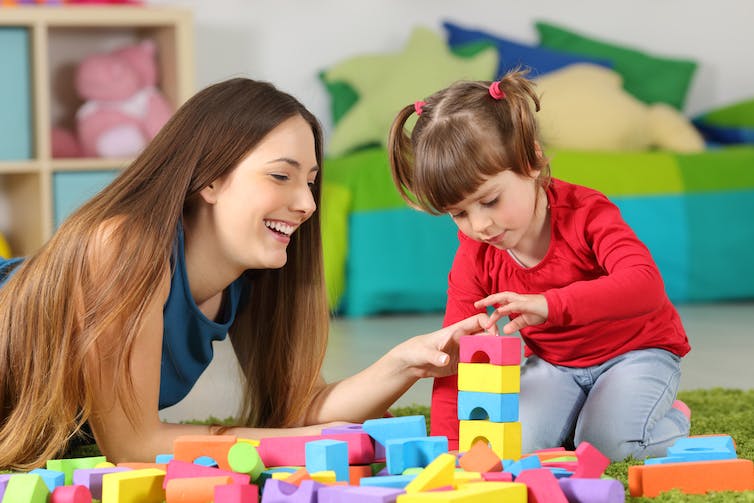 The best way to get your kids playing with blocks is to play along with them. Shutterstock

There are a wide variety of choices for blocks for children including MegaBloks for really young children, Duplo, wooden blocks or waffle blocks for preschoolers, and Eco bricks and Lego for older children.

These age guidelines are suggestions only. My ten and fourteen year old daughters will still play with the wooden blocks. Much of the reason blocks are such enduring toys is due to the fact they’re “loose parts”. That is, they can be moved, arranged, combined, taken apart, and put together in any number of ways. Frobel, the father of kindergarten, created ten gifts for children of which six were blocks.

The best way to engage children in block play is to play alongside them and show your interest and enthusiasm in block building. My friend has a ritual of playing half an hour every afternoon with Duplo with her three young boys aged five, three and one. She says it’s her favourite time of day.

Read more: Can toys really be ‘educational’? Well that depends on the parents

So, when those lists appear in your inbox or on social media, just remember the best toy of all is likely to be missing.