However, there are ways to minimise disruption to your sleep patterns and body clock when you travel.

The guidelines shown below are similar to those recently used by the Socceroos to help them overcome the jet lag associated with back-to-back games in Honduras and Australia. The result is that they’ll be heading to next year’s World Cup.

Research suggests that there are several things you can do to facilitate adjustment to time zone changes. These include:

As detailed below, we have prepared schedules for exposure to sunlight and low light to follow for 4-5 days after arriving in your new location.

What to do on the flight

The main difficulties with long-haul flights are dehydration, physical discomfort, and sleep loss. To address this, you should:

It can be difficult to get good sleep on a plane. The best strategy is to target sleep during night time in your departure city, and stay awake at other times.

To help sleep aboard the plane, recline your seat, keep your head stable with the headrest, use eye masks and ear plugs if required, and ask flight attendants not to disturb you.

Try not to miss sleep due to playing computer games or watching movies during your sleep target zones.

Melatonin is produced by your brain during the night to signal that it is time to be asleep, and it can be taken as an effective sleeping tablet in controlled circumstances. However if you don’t get the timing right, it can have unanticipated effects on your body clock.

Sleeping tablets can be effective, but can also impair concentration, coordination and alertness the next day, and issues of tolerance and dependence may arise. However, if required, short half-life non-benzodiazepines are preferred to benzodiazepines as they tend to have less negative impact on waking function the next day. Consult your doctor for advice on how to use these, and for a prescription if you think they are suitable for your needs. 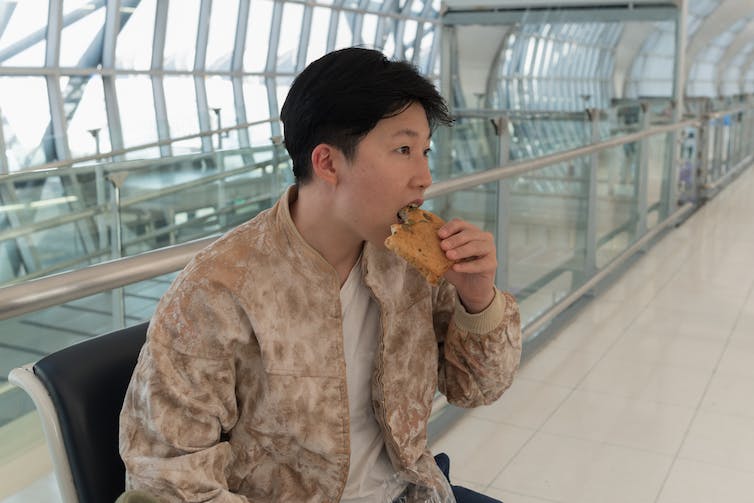 Eating white bread may be helpful if you want to sleep on a plane. from www.shutterstock.com

Research shows that diet can also be used to promote sleepiness at night time and alertness during the daytime. These effects of food usually last for 2-4 hours.

To promote alertness, eat foods that are high in protein, such as meat, eggs, fish and beans.

Read more: Health Check: how to soothe yourself to sleep

Staying inside and going outside at the right times can be hard, as your plans may prevent you from doing this.

If you can’t be outside in the sun, another way to achieve light exposure is to use lighting products that can provide bright light at will.

These products typically use a series of LED (light emitting diode) globes built into the frames of a pair of glasses. This setup delivers bright light directly to the eyes without the need to bother others - it’s what the Socceroos recently used while flying.

Bright light glasses are made by several companies. Another alternative is bright light boxes. These can be useful when the optimum light exposure times occur during the dark in your destination port.

For the reverse situation – that is, aiming to remove light exposure – normal dark sun glasses can be used if you’re outside at a time when ideally you need to be in the dark to adapt. So-called “blue-blocker sunglasses” are another alternative.

This example is for travel from Australia to Europe across around eight time zones, but it would work equally well for travel from the United States to Australia. We’ve used a 24-hour clock to indicate times - so for example, 2300 is 11pm, and 0400 is 4am.

We use the term “body clock minimum” to refer to the time of day when it is the easiest to be asleep, and hardest to function effectively if you are awake. For most people who are in bed from 2300–0700h, your body clock minimum occurs at about 0400h.

On the first day in Europe (after a time zone change of 8h West), you have not adapted to the new time zone, so your body clock minimum will be at 2000h local time, which is 0400h in Australia.

You want your body clock minimum to delay – that is, to gradually shift later each day from 2000h to 0400h. 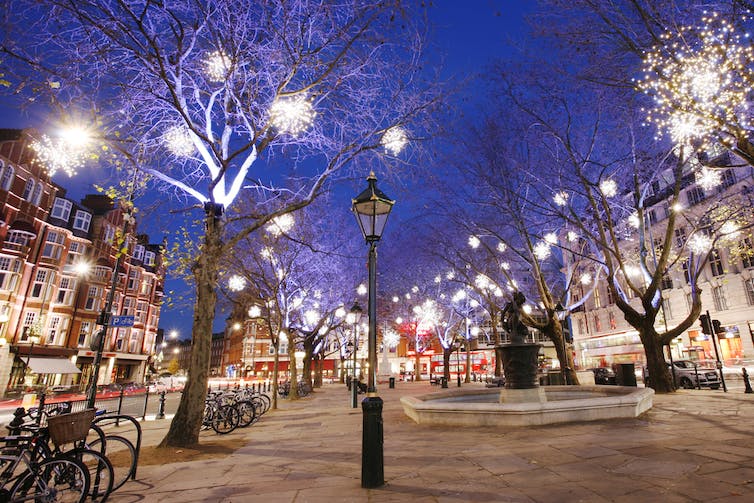 I’m dreaming of a London Christmas. from www.shutterstock.com

Light: Maximise light in the three hours before 2000h and avoid light in the three hours after 2000h. If it is summer in Europe, you could go outside in sunlight from 1700-2000h (no sunglasses). Otherwise you could use bright indoor light, or a portable light box, or bright light glasses; then dim light inside and blue-blocker glasses until bedtime.

Sleep: If you go to bed a little earlier than usual (around 2100-2200h), it should be easy to fall asleep because you will be going to bed just after the time of your body clock minimum. You may not get a full night of sleep because your body clock may wake you up earlier than usual. If you have a nap during the day, make sure you set an alarm to limit it to one hour.

Melatonin: You should not need melatonin to help you fall asleep because you will be sleepy in the evening. However, if you chose to use it on the first one or two nights, it will not cause any harm because it will help your body clock to delay.

On the first day in the US (after a time zone change of 8h East), you have not adapted to the new time zone, so your body clock minimum will be at 1200h local time, which is 0400h in Australia.

You want your body clock minimum to advance – that is, gradually shift earlier each day from 1200h to 0400h. 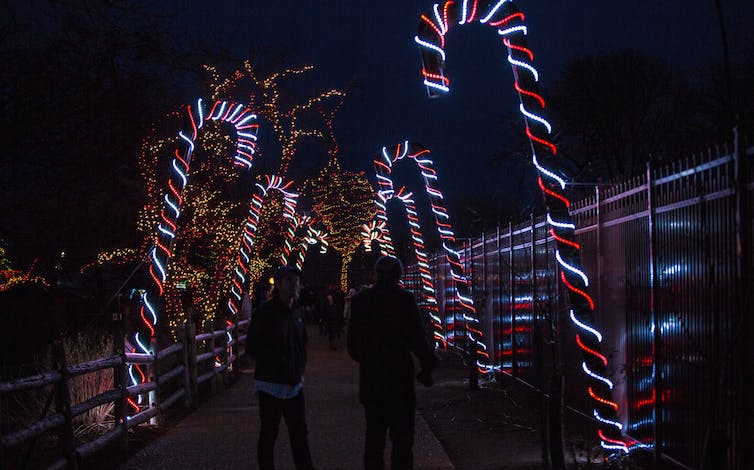 Sleep: You might find it hard to fall asleep until quite late, so you should sleep in in the morning if possible – this would have the added advantage of avoiding light in the morning. If you need a nap, do it before 1200h, or after 1500h, so you don’t miss out on sunlight from 1200–1500h. If you have a nap, make sure you set an alarm to limit it to one hour.

Melatonin: You should not use melatonin to help you fall asleep in the evening – it will make your body clock delay, which is the opposite of what you want.

If you arrive rested and with an adaptation plan ready to go, your holiday should be all you had hoped for.