Drought in the Murray River doesn’t just affect the river itself – it also affects the ecosystems that live in the ocean beyond.

In a study published in Marine and Freshwater Research today, we found that the very low flows in the river over the past decade reduced the abundance of microscopic marine plants called phytoplankton, which are ultimately the base of all marine food webs.

This shows that the health of the Murray River has a much bigger influence on the marine environment than we previously realised. With climate change poised to make droughts more frequent and severe in the river, it will be crucial to monitor the health not just of freshwater species, but of the local marine ones too.

Phytoplankton depend on nutrients, which are often delivered to the ocean by rivers. In turn, these tiny plants are a source of food for almost all marine ecosystems. Worldwide, they are responsible for half the production of organic matter on the planet.

In South Australia, a dry period dubbed the Millennium Drought (2001 to 2010) and overallocation of water resources (primarily for agriculture) meant that very little water was delivered from the Murray Mouth to the coastal ocean. Between 2007 and 2010, no water was discharged at all. The water in the river’s lower reaches became much saltier and cloudier.

We used historical flow records and satellite imagery, taken between early 2002 and late 2016, to figure out how much phytoplankton and other organic matter were in the coastal ocean each month. We broke up the area into incremental zones, venturing up to 130km from the river mouth.

We found that during and after high-flow events, Murray River discharge resulted in a huge increase in phytoplankton concentrations – as far as 60km beyond the river’s mouth. Surprisingly, before our research it wasn’t known that the river played such an important role in stimulating phytoplankton growth over such a large area. 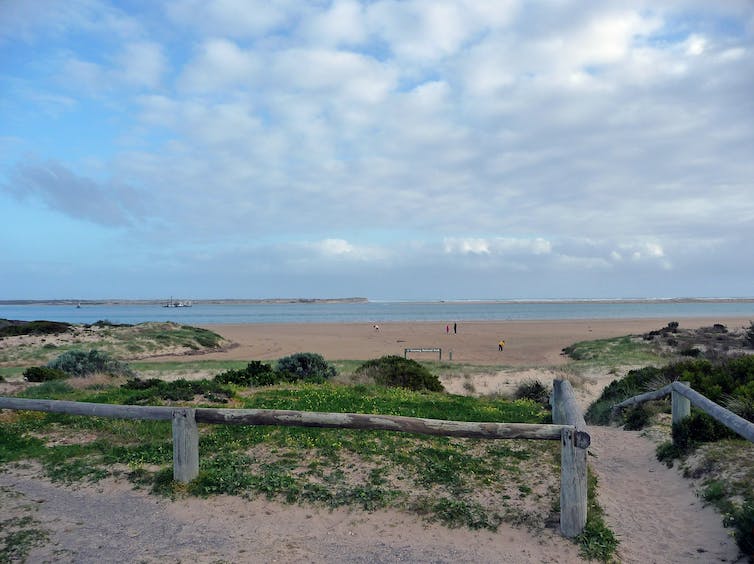 The mouth of the Murray River, where sometimes no water flows into the ocean at all. CSIRO/Wikimedia Commons, CC BY

Armed with an understanding of how river flows influenced phytoplankton growth, we used historic flow records to estimate phytoplankton concentrations back to 1962. Our results showed that large flows used to occur more often and in greater volumes, and consequently that phytoplankton populations would have gone through more frequent and larger booms.

This in turn would have benefited all of the species that ultimately depend on phytoplankton for food, either directly or indirectly. This food web encompasses almost the whole marine ecosystem.

Water resource management has greatly altered the volume and timing of freshwater discharges from the Murray. The ocean beyond the Murray mouth now receives small and infrequent deliveries of freshwater.

Rainfall and streamflow are decreasing in this already variable region, while temperatures are rising. This means that South Australia is likely to experience more severe and more frequent droughts, which will cause flows from the Murray mouth to decline still further, ultimately reducing phytoplankton abundance.

Previous research had already established the links between river outflows, phytoplankton and health of marine environments and species. But as far as we can tell, no other research has looked at exactly how extended periods of no or low river outflows affect marine ecosystems. This makes it difficult to predict how these systems will respond to climate change.

We believe that reduced Murray River outflows and reduced phytoplankton concentrations would likely have also placed strain on local mulloway fish and Goolwa cockle populations. Juvenile mulloway use river outflows as habitat and environmental cues, and cockles feed on organic material in the water.

Read more: ‘Tax returns for water’: how satellite-audited statements can save the Murray-Darling

This is why it is so important that the management of the Murray River doesn’t just stop at the river’s mouth, but continues into the ocean beyond. Current plans are focused on restoring flows to support the riparian and wetland ecosystems of the Murray as well as the Lower Lakes and Coorong.

But there has been little recognition of the role of river outflows on the marine environment – let alone in management. Although we might not always think about it, the marine environment is really the end of the river system, and part of a larger global cycle. It would therefore be beneficial if plans extend to monitor the marine ecosystem’s response, both at broad and fine scales, to varying flow events.

It would seem the time is past ripe to call for greater research and consideration on this matter, so that we don’t do further damage to what is actually still a part of the Murray River system, and can improve measures to protect the marine environment.