It is often said that we know more about the surface of other planets than we do about our own deep ocean. To overcome this problem, we embarked on a voyage on CSIRO’s research vessel, the Southern Surveyor, to help map Australia’s continental slope – the region of seafloor connecting the shallow continental shelf to the deep oceanic abyssal plain.

The majority of our seafloor maps depict most of the ocean as blank and featureless (and the majority still do!). These maps are derived from wide-scale satellite data, which produce images showing only very large features such as sub-oceanic mountain ranges (like those seen on Google Earth). Compare that with the resolution of land-based imagery, which allows you to zoom in on individual trees in your own neighbourhood if you want to.

But using a state-of-the art sonar system attached to the Southern Surveyor, we have now studied sections of the seafloor in more detail. In the process, we found evidence of huge underwater landslides close to shore over the past 25,000 years.

Generally triggered by earthquakes, landslides like these can cause tsumanis.

For 90% of the ocean, we still struggle to identify any feature the size of, say, Canberra. For this reason, we know more about the surface of Venus than we do about our own ocean’s depths.

As we sailed the Southern Surveyor in 2013, a multibeam sonar system attached to the vessel revealed images of the ocean floor in unprecedented detail. Only 40-60km offshore from major cities including Sydney, Wollongong, Byron Bay and Brisbane, we found huge scars where sediment had collapsed, forming submarine landslides up to several tens of kilometres across.

A portion of the continental slope looking onshore towards Brisbane, showing the ‘eaten away’ appearance of the slope in the northern two-thirds of the image, the result of previous submarine landslides. Samantha Clarke

What are submarine landslides?

Submarine landslides, as the name suggests, are underwater landslides where seafloor sediments or rocks move down a slope towards the deep seafloor. They are caused by a variety of different triggers, including earthquakes and volcanic activity. 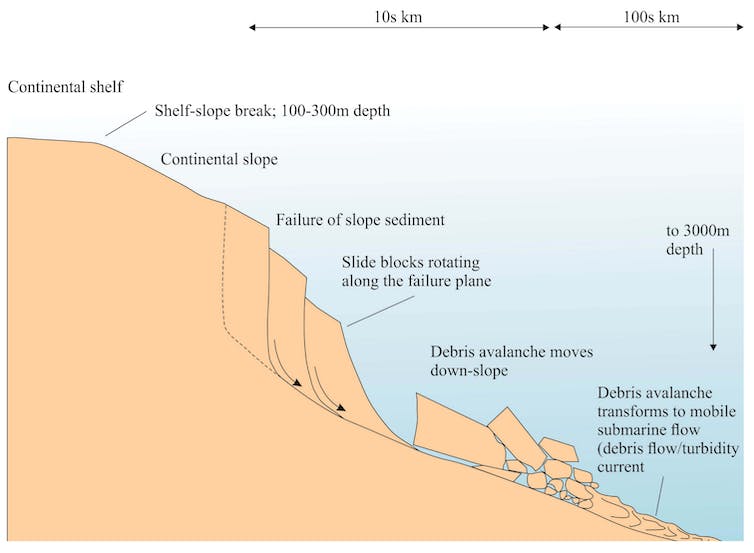 The typical evolution of a submarine landslide after failure. Geological Digressions

As we processed the incoming data to our vessel, images of the seafloor started to become clear. What we discovered was that an extensive region of the seafloor offshore New South Wales and Southern Queensland had experienced intense submarine landsliding over the past 15 million years.

From these new, high-resolution images, we were able to identify over 250 individual historic submarine landslide scars, a number of which had the potential to generate a tsunami. The Byron Slide in the image below is a good example of one of the “smaller” submarine landslides we found – at 5.6km long, 3.5km wide, 220m thick and 1.5 cubic km in volume. This is equivalent to almost 1,000 Melbourne Cricket Grounds. 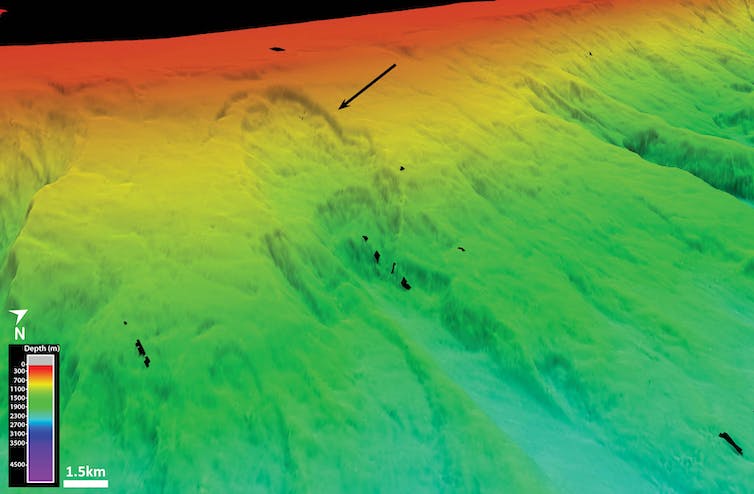 The historic slides we found range in size from less than 0.5 cubic km to more than 20 cubic km – the same as roughly 300 to 12,000 Melbourne Cricket Grounds. The slides travelled down slopes that were less than 6° on average (a 10% gradient), which is low in comparison to slides on land, which usually fail on slopes steeper than 11°.

We found several sites with cracks in the seafloor slope, suggesting that these regions may be unstable and ready to slide in the future. However, it is likely that these submarine landslides occur sporadically over geological timescales, which are much longer than a human lifetime. At a given site, landslides might happen once every 10,000 years, or even less frequently than this.

We also found that for a submarine landslide to generate along east Australia today, it is highly likely that an external trigger is needed, such as an earthquake of magnitude 7 or greater. The generation of submarine landslides is associated with earthquakes from other places in the world.

Submarine landslides can lead to tsunamis ranging from small to catastrophic. For example, the 2011 Tohoku tsunami resulted in more than 16,000 individuals dead or missing, and is suggested to be caused by the combination of an earthquake and a submarine landslide that was triggered by an earthquake. Luckily, Australia experiences few large earthquakes, compared with places such as New Zealand and Peru.

Why should we care about submarine landslides?

We are concerned about the hazard we would face if a submarine landslide were to occur in the future, so we model what would happen in likely locations. Modelling is our best prediction method and requires combining seafloor maps and sediment data in computer models to work out how likely and dangerous a landslide threat is.

Our current models of tsunamis generated by submarine landslides suggest that some sites could represent a future tsunami risk for Australia’s east coast. We are currently investigating exactly what this threat might be, but we suspect that such tsunamis pose little to no immediate threat to the coastal communities of eastern Australia.

This video shows an animation of a tsunami caused by submarine landslide.

That said, submarine landslides are an ongoing, widespread process on the east Australian continental slope, so the risk cannot be ignored (by scientists, at least).

Of course it is hard to predict exactly when, where and how these submarine landslides will happen in future. Understanding past and potential slides, as well as improving the hazard and risk evaluation posed by any resulting tsunamis, is an important and ongoing task.

In Australia, more than 85% of us live within 50km of the coast. Knowing what is happening far beneath the waves is a logical next step in the journey of scientific discovery.