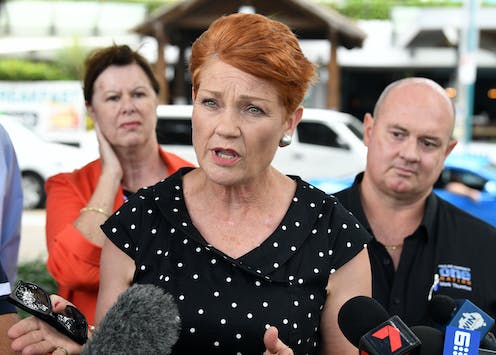 Twice this year, Pauline Hanson’s One Nation Party has generated lots of media attention in state election campaigns only to finish up doing badly.

In March, the party garnered only 4.9% of the statewide vote and won no seats in the Western Australian lower house (it won three upper house seats). In November, it won 13.71% of the vote but only one seat in Queensland’s unicameral parliament. In each case, One Nation contested not quite two-thirds of the lower house seats.

So, why does a party that seems so electorally marginal generate so much media attention?

One Nation and news values

An analysis of the coverage by Brisbane’s only daily newspaper, The Courier-Mail, of the Queensland campaign shows the seemingly disproportionate attention given to One Nation to be the result of a potent news-making brew: political vaudeville and genuine potential electoral clout, fortified by the attentions of a newspaper intoxicated by the anticipated possibilities.

The vaudeville was never edifying and mostly nasty.

There was Hanson’s bizarre claim that traffic congestion on the M1 motorway was somehow linked with the federal government’s immigration program. Too many migrants clogging up the roads, she argued.

There was One Nation’s policy on domestic violence, which would have relaxed restrictions on access visits by fathers against whom the courts had issued protection orders.

There was Hanson defending a One Nation candidate who owned a sex shop and who compared “good sex” with domestic violence.

What is a newspaper supposed to do with this stuff? After all, these people are standing for public office and their outpourings deserve scrutiny and exposure.

The ethical response is to apply some kind of public-interest test. Giving free publicity to salacious or xenophobic rubbish is not defensible. On the other hand, a stated policy position that puts children at risk from violent fathers is a real news story. It richly deserved the extensive and condemnatory coverage the newspaper gave it.

One Nation’s potential political clout was likewise a genuinely big news story. It played into the pre-existing narrative about minor parties benefiting from voter disaffection with the major parties.

In what the polls were indicating was going to be a tight election, it also offered the prospect that One Nation might hold the balance of power. Drama, controversy, unpredictability: three strong news values at any time, and The Courier-Mail made the most of them.

Was the attention so unwarranted?

In September, two months before the election, it was framing routine news stories about the incumbent Labor government’s health and employment policies as being designed to lure disaffected voters who were said to be moving to One Nation.

It was describing One Nation as “resurgent”. Liberal National Party candidates whose seats were not being contested by One Nation were described as having been “spared”. Dickson was reported to be “adamant” that One Nation would hold the balance of power. One Nation was “tipped to win a swag of seats outside Brisbane”.

There was some evidence for this. Polling showed big swings to One Nation. Bookmakers’ election charts showed One Nation gaining ground.

But then came a sobering reality check: the first poll of the campaign showed One Nation’s share of the statewide primary vote as 18%. This was down from 23% in February.

Yet the dramatic news-speak continued. There was a “blitz” by the major parties on regional seats said to be “under siege” from One Nation. Hanson was about to “jet into the Queensland campaign tomorrow poised to handpick the state’s next premier”. There’s that word “poised” again.

As if to give substance to this premature excitement, readers were reminded that One Nation’s 18% of the vote was only 4.7 percentage points short of the 22.7% it received in the 1998 election, when it won 11 seats in the Queensland parliament. Could history from nearly 20 years ago repeat itself?

The language around One Nation’s chances was scaled back. By way of explanation, the newspaper reported that Queensland voters were concerned that One Nation might hold the balance of power, and believed this to be detrimental to the state.

It all seems such a beat-up in hindsight, and to some extent it looked like one at the time. But it was not entirely a beat-up.

One Nation did badly overall, but in the seats where all the media attention was focused, it really did mount a credible threat, as the following table shows. These seats were all mentioned in The Courier-Mail’s coverage as being at some degree of risk from One Nation – and, except for Mansfield, the figures bear that out.