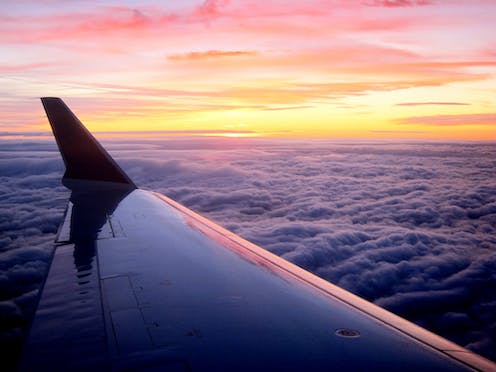 Australia is an important player in the global tourism business. In 2016, 8.7 million visitors arrived in Australia and 8.8 million Australians went overseas. A further 33.5 million overnight trips were made domestically.

But all this travel comes at a cost. According to the Global Sustainable Tourism Dashboard, all Australian domestic trips and one-way international journeys (the other half is attributed to the end point of travel) amount to 15 million tonnes of carbon dioxide for 2016. That is 2.7% of global aviation emissions, despite a population of only 0.3% of the global total.

Read more: Life in a post-flying Australia, and why it might actually be ok

The peak month of air travel in and out of Australia is December. Christmas is the time where people travel to see friends and family, or to go on holiday. More and more people are aware of the carbon implications of their travel and want to know whether, for example, they should purchase carbon offsets or not.

Our recent study in the Journal of Air Transport Management showed that about one third of airlines globally offer some form of carbon offsetting to their customers. However, the research also concluded that the information provided to customers is often insufficient, dated and possibly misleading. Whilst local airlines Qantas, Virgin Australia and Air New Zealand have relatively advanced and well-articulated carbon offset programs, others fail to offer scientifically robust explanations and accredited mechanisms that ensure that the money spent on an offset generates some real climate benefits.

The notion of carbon compensation is actually more difficult than people might think. To help explain why carbon offsetting does make an important climate contribution, but at the same time still adds to atmospheric carbon, we created an animated video clip.

The video features Jack, a concerned business traveller who begins purchasing carbon credits. However, he comes to the realisation that the carbon emissions from his flights are still released into the atmosphere, despite the credit.

The concept of “carbon neutral” promoted by airline offsets means that an equal amount of emissions is avoided elsewhere, but it does not mean there is no carbon being emitted at all – just relatively less compared with the scenario of not offsetting (where someone else continues to emit, in addition to the flight).

This means that, contrary to many promotional and educational materials (see here for instance), carbon offsetting will not reduce overall carbon emissions. Trading emissions means that we are merely maintaining status quo.

A steep reduction, however, is what’s required by every sector if we were to reach the net-zero emissions goal by 2050, agreed on in the Paris Agreement.

Read more: It’s time to wake up to the devastating impact flying has on the environment

Carbon offsetting is already an important “polluter pays” mechanism for travellers who wish to contribute to climate mitigation. But it is also about to be institutionalised at large scale through the new UN-run Carbon Offsetting and Reduction Scheme for International Aviation (CORSIA).

CORSIA will come into force in 2021, when participating airlines will have to purchase carbon credits for emissions above 2020 levels on certain routes.

The availability of carbon credits and their integrity is of major concern, as well as how they align with national obligations and mechanisms agreed in the Paris Agreement. Of particular interest is Article 6, which allows countries to cooperate in meeting their climate commitments, including by “trading” emissions reductions to count towards a national target.

The recent COP23 in Bonn highlighted that CORSIA is widely seen as a potential source of billions of dollars for offset schemes, supporting important climate action. Air travel may provide an important intermediate source of funds, but ultimately the aviation sector, just like anyone else, will have to reduce their own emissions. This will mean major advances in technology – and most likely a contraction in the fast expanding global aviation market.

In the meantime, and if you have booked your flights for Christmas travel, you can do the following:

And it’s worth thinking about what else you can do during the year to minimise emissions – this is your own “carbon budget”.