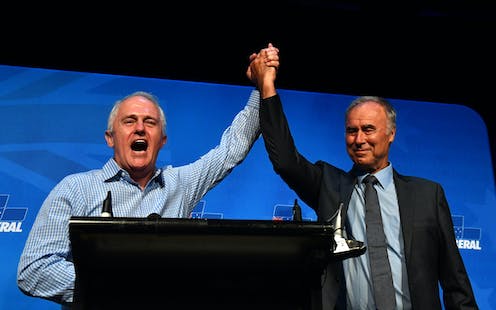 Alexander, who faced the high profile Labor candidate Kristina Keneally, a former New South Wales premier, has a two-party swing against him of about 5.6% on counting so far. This gives Alexander a 54-46% two-party vote.

Addressing the party faithful, Alexander told Turnbull: “This is a renaissance of your leadership”. The Bennelong win follows the strong government victory in the recent New England byelection.

An exuberant Turnbull said: “Thank you Bennelong’”. He declared that Alexander, a former tennis champion, was “winning yet another great title”.

The Liberals have had a swing against them of about 6.3% on primary votes; the swing to Labor on primaries has been around 7.6%.

The result – with a swing around the average for byelections - is a major relief for Turnbull, who would have faced deep trouble if the seat had been lost.

Alexander said: “This is an extraordinary moment for us. … It’s been a real battle”.

In the last days of the campaign, Labor said it did not expect to win the seat, which had a 9.7% margin, but it hoped to run the government closer than it has.

On Saturday night, Labor was making the most of the swing by translating it to a national election result.

Opposition leader Bill Shorten told Labor supporters the voters of Bennelong had given Labor “an election-winning swing at the next election”.

“This was not an ordinary byelection”, he said. “Normally in a byelection the former member does not run again”. Given Alexander’s personal vote, the entire swing was “attributable to Malcolm Turnbull and his rotten policies for this country”.

If Labor could replicate this swing at the election, “24-28 government seats will fall”, Shorten said. “Labor finishes 2017 with the most remarkable wind in its sails”.

He said in 2018, Labor “will be courageous and we will stand up and put people first”.

Keneally told the Labor campaign workers this had been “an extraordinary result”.

She said unfortunately she was not there to claim victory but “I am here tonight to claim success for the Labor movement”.

Turnbull “owns this result”, Keneally said. “The verdict is in, the message is clear, we have had enough of your lousy leadership.” Thousands of people who had previously voted for the Liberals had rejected the government, and Labor had been “energised” by the result, she said.

Labor was texting journalists saying such a swing would take out cabinet ministers Peter Dutton and Christian Porter.

Leader of the House of Representatives, Christopher Pyne, said of the Shorten and Keneally speeches: “The level of delusion was epic”. He said the result would improve when the prepolls and postals were counted.

The byelection was sparked by Alexander resigning in the citizenship crisis.

Both Turnbull and Shorten had campaigned hard in the electorate.

In a seat with a very high proportion of Chinese voters, the byelection campaign was particularly bitter.

Labor accused Turnbull of “Chinaphobia” in the wake of the government’s attacks on Labor’s Sam Dastyari and its move to crack down on foreign interference in Australian politics.

Dastyari, under pressure for his closeness to a Chinese benefactor and for promoting Chinese interests, announced earlier this week that he would resign from Parliament. Keneally has not ruled out seeking to fill the Dastyari vacancy in the Senate.

The government resurrected Keneally’s history as NSW premier, seeking to link her to disgraced Labor figures Eddie Obeid and Ian Macdonald, both of whom are in jail.

Cory Bernardi’s Australian Conservatives, in its first electoral outing, had a vote of about 4.5%, with preferences flowing strongly to Alexander.

The government will now have the numbers to refer the citizenship of several Labor MPs to the High Court, while successfully resisting having any of its own MPs referred.

The Minister for International Development and the Pacific, Concetta Fierravanti-Wells, said this was a good win for the prime minister and urged an end to the backgrounding against him.