On Monday, the government announced its third attempt to significantly reduce spending on higher education in the Mid-Year Economic and Fiscal Outlook (MYEFO).

It’s unclear whether the proposal is intended to be a long-term policy, or a bargaining chip to achieve the cuts Education Minister Simon Birmingham tried to push through earlier this year.

Overall, it’s not very good policy, as it’s primarily about making savings rather than improving higher education. Australia needs a higher education system that can respond to change, not one that is locked down. It will become extremely difficult for any minister to reverse these funding cuts after a couple of years. Students will pay a greater share of costs as a result.

What’s in the proposal?

The government is proposing to achieve savings in ways that don’t require Senate approval. It proposes to:

The government also indicated it would pursue some savings requiring Senate approval. These are to: 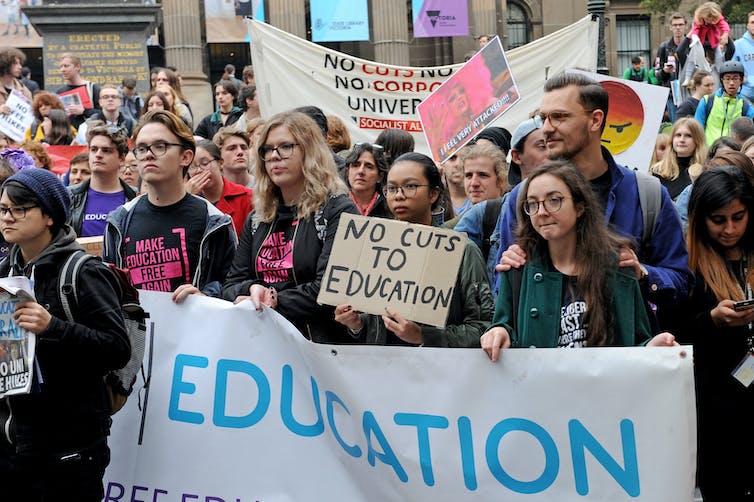 Next year, the government wants to lower the HECS repayment threshold. Joe Castro/AAP

What will the proposals do?

The government estimates these proposals will save around A$2.2 billion over the next four years. Most of the savings come from freezing funding for bachelor degree courses in 2018 and 2019, and the limit on funding growth for those courses from 2020 onwards.

This funding is delivered through the student place subsidies paid under the CGS. Combined with a student’s contribution (usually paid through HECS-HELP), these cover the cost of teaching students.

The CGS provides subsidies for all courses, not just bachelor degree courses. It also provides a number of loadings, such as the regional loading, to help to meet extra costs. In 2017, CGS spending will be around A$7.1 billion in total.

The main target of the government’s proposals is the A$6 billion of spending on bachelor degree courses. Currently, universities can offer as many places for bachelor students as they want in the demand-driven system, so spending on this element of the CGS can increase without government approval.

Read more: Uncapping of university places achieved what it set out to do. So why is it dubbed a policy failure?

In the case of other courses, such as diplomas, associate degrees and postgraduate degrees, the government still controls how many places a university can offer. It controls its spending on these courses and special loadings.

The government will no longer try to lower the amounts of its contribution to student places, which are specified in higher education funding legislation. Instead, it will use a provision in the legislation that allows it to put a cap on funding for bachelor degree courses without Senate approval.

Universities don’t have the option not to sign these funding agreements. They are a precondition of getting any CGS funding and having any Commonwealth supported students.

Currently, the government will pay a university for every domestic bachelor degree student according to the legislated subsidy levels for the relevant year. It will still do this, but only up to the maximum amount specified in the funding agreement - then it will just stop.

When the maximum amounts for every university in 2018 are added up, they will not exceed the A$6 billion expected to be spent in 2017. The same goes in 2019. 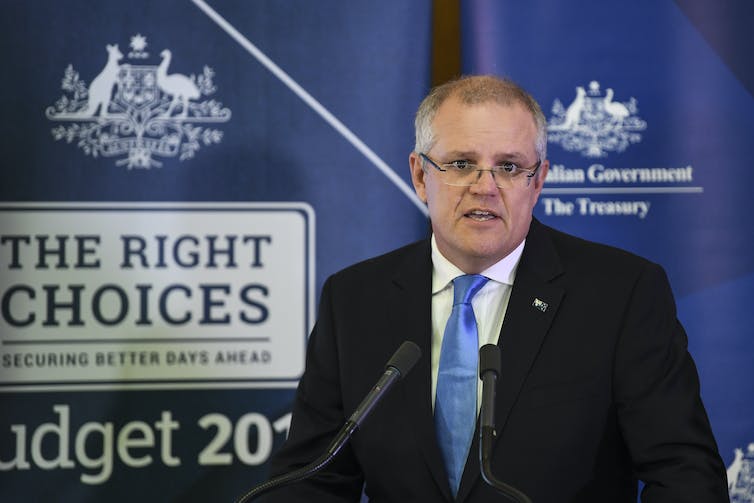 The government announced on Monday that it would be freezing funding for 2018 and 2019 at 2017 levels. Lukas Coch/AAP

What happens after the freeze lifts?

From 2020, a university may have its maximum amount for student places in bachelor degree courses increased by the growth rate in the 18-64 year old population, if the university meets performance targets. On current ABS population projections, that is likely to be around 1.2% each year.

Assuming all universities meet the performance targets, there are two ways of looking at the impact:

Education Minister Simon Birmingham has been asked what his policy will mean for the number of domestic student places. He can’t answer these questions because it’s not his decision. Universities are unlikely to increase domestic bachelor degree student places and the policy settings are likely to distort university decision-making.

The government hasn’t released estimates of how university funding will be reduced due to restricting growth in bachelor degree funding. The graph below indicates how it is likely to be reduced each year to 2025, based on a fairly conservative set of assumptions. It shows how rapidly the savings from such a proposal escalate.

If the government’s policy is implemented, any minister would find it almost impossible to reverse. Ministers who want to change policy and increase spending have to find savings from elsewhere to cover the costs. The cost of reversing this policy would be massive, as it takes only a few years for it to produce savings of over a billion dollars a year.

How does this affect students?

While the government will substantially reduce its funding contribution by eroding its real value, students will continue to pay more as their contribution to the cost of their degree continues to increase with inflation.

In addition, if a university decides to grow its bachelor level student places despite not receiving any government subsidy for them, the student will still be required to make their contribution.

Both of these factors mean the 30-year trend of shifting the cost of higher education from government to students will continue. This is despite it being a major part of the reason student debts are continuing to grow and greater amounts are not being repaid - a problem the government claims it’s trying to fix.

The demand-driven system is not unsustainable

The rapid expansion that occurred under the demand-driven system has largely stabilised and total funding for general research and tertiary education has declined in real terms by 1.3% over the last four years.

Previous savings paid for most of the demand-driven expansion in student places and Australia’s spending on tertiary education as a share of GDP is now lower than it was before the demand-driven system was introduced.

The government is giving the objective of returning the budget to surplus a higher priority than the development of our tertiary education sector. This includes the vocational education and training system, which has already had its funding eroded over many years.

We can have both budget repair and well-funded tertiary education, but not with this policy.