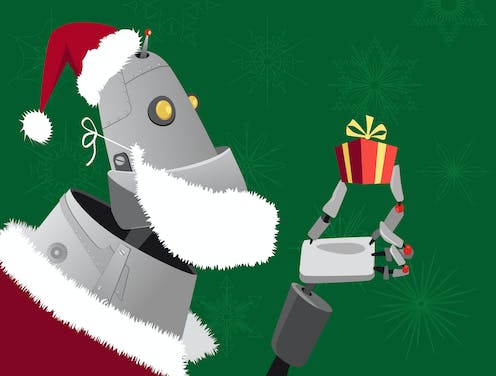 In 1897, eight-year-old Virginia O’Hanlon wrote to the editor of New York’s The Sun newspaper to ask whether her friends were right to say there was no Santa Claus.

Papa says, ‘If you see it in THE SUN it’s so.’Please tell me the truth; is there a Santa Claus?

Her letter prompted one of the most famous newspaper editorials in history, Yes, Virginia, there is a Santa Claus.

A modern-day Virginia’s smartphone is probably more capable than Santa of knowing what she wants for Christmas.

So, how long before Siri and a network of artificially intelligent successors (programmed to anticipate human needs and communicate with each other) usurp Santa and start asking the alternative question: is Virginia real?

In the spirit of the New York’s The Sun (which no longer exists, sadly) this reply from a newspaper editor (if they still exist in the future) to a robotic Santa is set in 2047, 150 years after Virginia asked the question that is part of Christmas folklore.

Your friends are wrong, affected by the scepticism of a sceptical age where they believe their “intelligence” can anticipate every thought and match it with an action.

It’s true that you machines, invisible but ubiquitous, have trumped our natural intelligence through your endless, silent buzz with each other. It began in the 2010s with Siri, and ultimately reached your level of apparent omnipotence.

But don’t forget. Somewhere (often remotely) at the end of every action, you are serving a human. In your case, it’s a little girl who wants to keep believing in the mystery and magic of Christmas.

So in answer to your question: Yes Santa, there really is a Virginia.

Don’t forget. The Santa whom children believed in has always seen all and known all - just like you.

He has always had helpers to create the gifts and magic of his story. Now, the workshops are run by bots, and the elves have become marketing assistants who no longer know how to wrap a gift, let alone guess what a little girl might want.

And the reindeer, freed from training for their annual epic flight thanks to your army of drones, have gone to fat. Even Rudolph with his nose so bright can no longer guide himself to the food trough, let alone a sleigh tonight.

Santa, you’ve asked what this is all about, what is your purpose? And precisely, is there really a Virginia or is she, as your robotic friends say, the toy of a personal bot she has had since birth?

The personal bot boom of the 2020s, then the development of belief and philosophy by your robotic predecessors in the 2030s, was always going to lead to you asking this question.

Fair enough. In earlier times, we humans would have asked ourselves why we were helping a machine think about its purpose in life. In fear, our instinct would have been to instantly cut off its power. Now we’re flattered you asked.

Thankfully, we accepted how machines like you could do the heavy physical and mental lifting that for centuries has been the burden of humans.

We regulated your limits but gave you rights. Now our minds and bodies have been freed from the strains of earlier times, sparing us to concentrate on living good lives, rather than productive lives.

But, Santa, the good human life well lived starts with fantasy, as one of our predecessors, New York’s The Sun, explained to children 150 years ago.

The power of fantasy describes where the work you do every year comes from.

But the fantasy does not belong to the other bots you talk to. The fantasy belongs to the child they serve. Such fantasy allows something unexplainable to create universal joy, an emotion you can understand but never experience.

And those fantasies are what will create new ways of meeting human needs. Such fantasies led people to dream of, then create, the first robots with only a fraction of your capabilities. Such fantasies found ways to power the planet without damaging it.

Your question about your purpose reminds us that such fantasies continue to matter - even to machines like you that learn effortlessly from us and each other.

But Santa, there is one fantasy you should not have. And that is that the little girl who craves a doll or a toy car like they used to drive in the good old days doesn’t matter. Or that the little boy who craves a toy kitchen or inflatable ball is subservient to the personal bot your “elves” listen to.

No Virginia, Santa? She is real - even if not to you. And you are real to her, not as a machine but as a magical figure that sees all and knows all - just as you always have, long before Siri.

Thanks to veteran journalist Francis Pharcellus Church, who penned the original editorial in New York’s The Sun all those years ago.