If your face goes red when drinking alcohol, you’re not alone. More than one in three people with East Asian heritage (Chinese, Japanese and Korean) experience facial flushing when drinking beer, wine or spirits.

In Asian populations, it is due to an inherited deficiency in one of the enzymes involved in the breakdown of alcohol: aldehyde dehydrogenase. This type of reaction is very rare, but not unknown, in other ethnic groups.

But there is more to this deficiency than just an embarrassing reddening of the face. There are positive and negative health implications. And it provided a lightbulb moment, helping us understand how a common treatment for alcoholism works.

How you digest alcohol

Alcohol is broken down in your liver in two steps. In the first step, the enzyme alcohol dehydrogenase converts alcohol into a rather nasty chemical called acetaldehyde. A build up of this toxic chemical is one of the reasons you feel sick when hungover.

Read more: Got a hangover? Here’s what’s happening in your body

Then a second enzyme, aldehyde dehydrogenase, converts the acetaldehyde into acetic acid (the harmless acidic component of vinegar).

Aldehyde dehydrogenase deficiency is common among Chinese, Korean and Japanese people. Some inherit two copies of the defective gene for this enzyme; one from each parent. Their liver makes a faulty version of the enzyme. 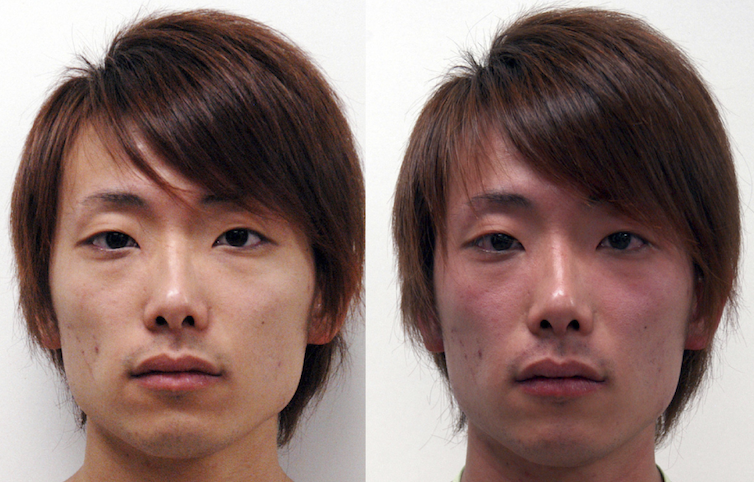 Others inherit the defective gene from just one parent and they produce both normal and faulty enzyme. However, this partial deficiency results in only 1% of full enzyme activity, rather than the 50% you might expect. This is because the faulty version is less stable and multiple copies of the enzyme need to work together as a unit.

If you inherit full or partial deficiency in aldehyde dehydrogenase, you will experience prolonged high levels of acetaldehyde very soon after drinking alcohol – and all the unpleasant sensations that go with that. Think of it as an instant hangover: nausea, sweating, headache, racing heart, dizziness, along with facial flushing.

What does it mean?

The good news is that because of aldehyde dehydrogenase deficiency, alcoholism and alcohol-related cancers are much less prevalent in East Asian populations. This is because people feel so bad after drinking alcohol, they tend to drink very little, if at all.

Now for the bad news. If you do have aldehyde dehydrogenase deficiency, but still drink, you are at a higher risk of alcohol-related cancers, such as cancer of the oesophagus (the tube between your mouth and your stomach).

Read more: Alcohol increases cancer risk, but don’t trust the booze industry to give you the facts straight

The risk is highest for those with partial deficiency. This is because their low residual enzyme activity allows them to develop some tolerance to the unpleasant effects of drinking, but they are still exposed to high levels of acetaldehyde.

It may come as a surprise that anyone with aldehyde dehydrogenase deficiency would drink. But the reasons why we like alcohol are complex. Some of it is metabolic, some is brain chemistry and some is social.

Certain people feel more intense pleasure than others when drinking alcohol and this can contribute to addiction.

Studies of the drinking habits of Asian-American university students have shown that social influences, such as exposure to drinking culture, peer pressure and family attitudes to alcohol can help override the unpleasant physical effects that come with aldehyde dehydrogenase deficiency.

What can you do about it?

It is regularly reported in the media and online that “antihistamines” prevent “Asian flush”.

There are drugs that can reduce facial flushing, but they are not the classical antihistamines, such as you take for hay fever. Certain drugs used to treat gastric acid reflux (such as Zantac and Tagamet) have the side effect of reducing alcohol-induced facial flushing. We don’t normally think of these drugs as antihistamines, but technically they are, because they block the histamine H2 receptors in the stomach, which are associated with the release of stomach acid.

The drugs we commonly call antihistamines (Zyrtec, Telfast and Claratyne) target the histamine H1 receptor and they have no effect on alcohol-induced facial flushing. 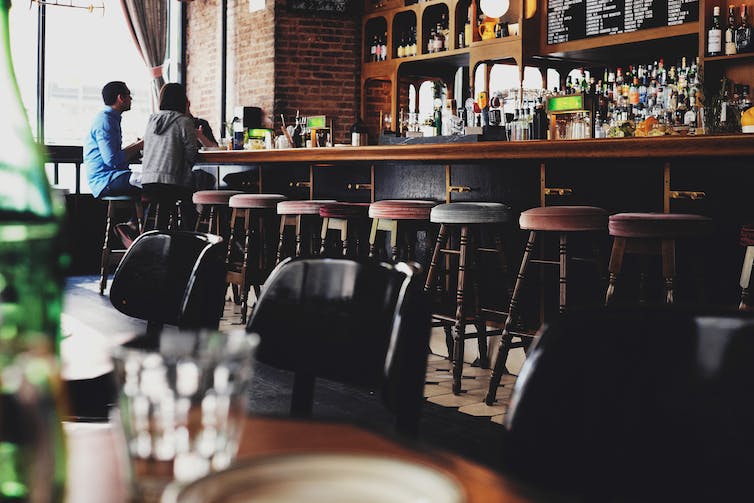 H2 blockers have few side effects and are relatively safe drugs. But while they mask the symptoms, they won’t reduce the toxic effects of acetaldehyde. Popping a pill and drinking to excess can lead to acetaldehyde tolerance and increase the risk of cancer.

So, if you have aldehyde dehydrogenase deficiency, it’s better to avoid alcohol altogether. But if you do drink, just drink a little and let the flush happen.

It doesn’t matter what form the alcohol comes in, it is metabolised the same way. But how much alcohol a drink contains and how fast you drink it will affect the concentration of acetaldehyde in your body.

How this helps treat addiction

The rareness of alcoholism in Asian populations has a surprising parallel with a treatment for this addiction.

It had long been noted that workers in rubber factories suffered similar symptoms when they drank alcohol. In the 1930s, the offending chemical, Disulfiram, was identified and by the 1950s it was marketed as the drug Antabuse. In the 1980s experts realised Antabuse blocks the activity of aldehyde dehydrogenase.

So, taking Antabuse creates temporary aldehyde dehydrogenase deficiency and one drink is enough to bring on the same unpleasant symptoms felt by those that inherit the deficiency.

But it isn’t a silver bullet and doesn’t work for everyone. Just as some people with inherited aldehyde dehydrogenase deficiency still drink to excess and develop alcoholism, an instant hangover is not enough to drive some people with alcohol problems away from the “demon drink”.