With partridges in pear trees, robins, and of course turkeys, you might think birds of the northern hemisphere have a monopoly on Christmas. But if you look closely, many Australian native birds embody the Christmas spirit with as much gusto as their northern counterparts.

And while you might be ready to call it a day rather than face yet another turkey sandwich, these festive birds keep the Christmas spirit going all year round.

Read more: Is it really so wrong to care for an introduced bird species?

At any local candlelit carol service, dads can be heard enthusiastically belting out Joy to the World.

While it is not clear if their vocal acrobatics impress anyone, male lyrebirds rely on their complex melodious calls to attract mates. These species have an extensive repertoire, and will often mimic the sounds they hear around them. In Sir David Attenborough’s classic The Life of Birds, the superb lyrebird imitates kookaburras, whipbirds and even chainsaws, camera shutters and car alarms!

The Christmas traditions around the evergreen mistletoe originate in the northern hemisphere, but did you know there are more than 90 species of mistletoe that are native to Australia?

Mistletoes are aerial parasitic plants that attach to tree branches, and their seeds are dispersed by birds. The aptly named mistletoebird eats the mistletoe berries and excretes the seed a short time later. With a wiggle and a twist, the mistletoebird then wipes the seed onto the branch of a suitable host tree. A sticky substance around the seed then glues it in place.

By dispersing mistletoe seeds with such care, the mistletoebird ensures a reliable source of its favourite food throughout the year.

Male bowerbirds construct a bower (two parallel walls of sticks) in which they display a selection of items designed to tempt females. These gifts can include leaves, shells, feathers and flowers and bits of glass and plastic.

Once the female is suitably interested in a male bowerbird’s collection, the males will perform a wing-flapping, head-bobbing dance with accompanying sounds. While this approach works well for the bowerbird, human results may vary. 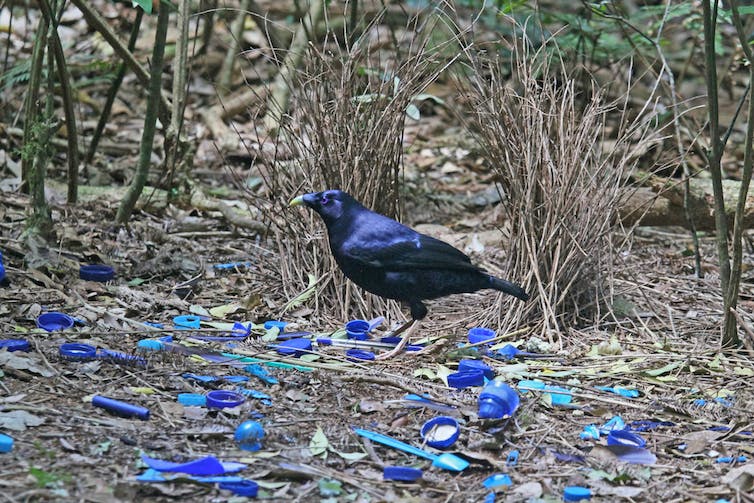 While I am not suggesting you swap your turkey roast for a native alternative, there are several types of “bush turkeys” that have been a valued food source for Aboriginal Australians for millennia.

The Australian bustard – the heaviest flying bird in Australia, weighing up to 14.5kg – was once described by Captain James Cook as “an excellent bird, far the best … that we have eat [sic] since we left England”.

The bustard’s range and population have greatly declined since Cook’s time, as a result of increased hunting, the introduction of feral predators, and changes in land use that have destroyed large tracts of its habitat.

Red and green all over

You might have decided, justifiably enough, that once a year is enough when it comes to dressing from head to toe in red and green. But some of our native birds wear their Christmas colours all year round.

The male and female eclectus parrot make a striking pair. This species is known for their pronounced differences in plumage: males are mostly bright green, whereas females are almost entirely bright red.

This has been attributed to the mating strategy of the species. Both males and females breed with multiple partners. The bright red females are conspicuous as they sit at the entrance to their nesting hollow, warding off rival females and attracting males. The bright green males, meanwhile, are camouflaged as they forage for food to deliver to multiple females at their nesting sites.

Read more: Why we ‘hate’ certain birds, and why their behaviour might be our fault

How does Santa manage to collect so much information on Australian children’s behaviour without leaving the North Pole? One theory (suggested by no less a scientific authority than my five-year-old daughter) holds that he does it with the help of the migratory waterbirds that every year make an astonishing trip from Australian shores to the Arctic Circle and back.

Bar-tailed godwits arrive in Australia in August, having flown from their northern hemisphere breeding grounds. Over the Australian summer they use their long bills to scour mudflats, mangroves and beaches for food.

Most of them leave Australia in April with full bellies (and valuable intel?) and head back to their Arctic breeding grounds. The distances travelled during migration are mind-blowing: a bar-tailed godwit was tracked flying more 11,000km, non-stop, in nine days. Beat that, Santa.