It’s difficult not to get stressed in our fast-paced lives. Whether you’re working overtime, battling exams, or caring for a sick relative, chronic stress has become commonplace. 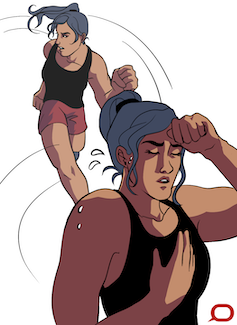 Adrenaline allows us to act quickly.

When we’re acutely stressed, the fight-or-flight system jumps into action, sending a surge of adrenaline through the body. This product of evolution dramatically increases our reaction speed and once allowed us to escape or fight a predator.

But our bodies are not designed to cope with ongoing activity of these stress pathways.

The psychological effects of stress – such as irritability, loss of appetite, and difficulty sleeping – are obvious to anyone who has been under pressure. But stress also has subtle, underlying effects on almost every part of the body, including the heart, gut and immune system.

Here are just three reasons to get your stress levels in check this year.

1. You’re at risk of a heart attack

When activated, the fight-or-flight system causes blood pressure to spike and redirects blood flow away from non-essential parts of the body and into the muscles.

One study found people who were chronically stressed, either in their work or home life, were more than twice as likely to have a heart attack than those who weren’t.

Another effect of stress on the cardiovascular system is hyper-responsiveness. When a person is suffering low but persistent levels of stress, their response to an added source of stress is much more intense than normal, leading to larger spikes in heart rate and blood pressure.

2. Your bathroom habits are unpredictable

The same systems that increase blood pressure and heart rate during stress also cause food to be digested more slowly. 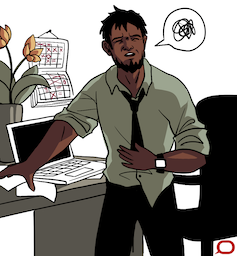 The chemicals produced by the stomach and intestines change when you’re stressed. Food gets broken down in different ways and the body may have difficulty absorbing the nutrients from it. This can lead to constipation, diarrhoea and general intestinal discomfort.

Read more: So you think you have IBS, coeliac disease or Crohn’s? Here’s what it might mean for you

Treatment for these diseases usually revolve around managing the painful and uncomfortable symptoms instead of addressing the underlying cause. However some therapies, such as the hormone melatonin, work by reducing the effects of stress on the gut.

3. You’re more likely to get sick

We’ve long known that stress makes people more vulnerable to catching minor illnesses but we’ve only begun to understand how stress affects the immune system over the past few decades. 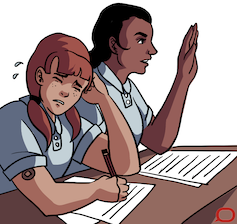 Students who were less stressed when receiving the vaccination had a better immune response than their anxious peers. Marcella Cheng/The Conversation, CC BY-ND

The best examples of this come from a study of chronically stressed carers who look after patients with Alzheimer’s disease, and another of medical students in the middle of their exam period.

When given the flu vaccine, the stressed caretakers had a lower immune response to the vaccine than normal.

Conversely, when the medical students in the middle of their exam periods were vaccinated against hepatitis, the students with better social support and lower levels of stress and anxiety had a much better immune response to the vaccine than other students.

In other words, when the participants were stressed, their immune system didn’t function as it should to recognise and defend against the virus. The same occurs for colds and flus, other viruses, bacterial infections and even cancer.

Read more – Explainer: what is the immune system?

When stress causes the immune system to break down, a bug that might have been under control can suddenly start flourishing. Once a person begins feeling sick, their stress levels will likely rise and make it harder for the immune system to fight off the disease. This prolongs the illness and increases the risk it will be passed on to another person.

How to reduce your stress levels

There are many strategies available to reduce the effects of stress, but their health benefits have only recently started to be researched and understood over the past few decades.

An interesting example of this came from an experiment in 2002, where subjects were given injections of artificial adrenaline to increase their blood pressure and heart rate. But when one of the subjects got bored and started meditating, their heart rate suddenly dropped back to normal, even with the researchers attempting to increase it artificially. 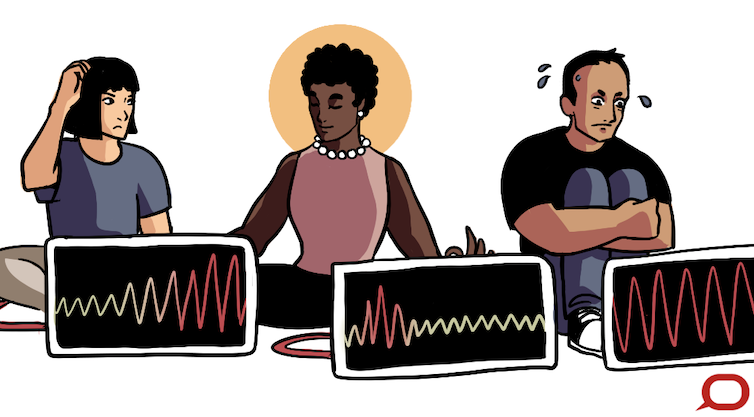 This finding was applied in a 2008 study, where researchers took newly diagnosed breast cancer patients and enrolled them in a mindfulness-based stress-reduction program that focused on breath awareness, meditation and yoga.

After eight weeks of participation in the program, the immune systems of the women had all made a remarkable recovery, and were functioning just as well as a healthy person’s immune system. The women also reported feeling much more optimistic about their future, as well as feeling more connected with their family and friends.

Read more – Mindfulness: how to be in the moment … right here, right now

Interestingly, short bursts of acute stress can be beneficial to immune function, particularly of that associated with exercise. While solid evidence is still lacking in humans, mice received a huge benefit from frequent exercise while fighting off melanoma.

In the end, it comes down to being aware of your stress levels, and what works for you to get your stress in check. You might be surprised at just how many of your bodily functions benefit from you being a bit more relaxed.