Model Citizens, the latest show from Circus Oz, playing as part of the Sydney Festival in Parramatta, is not to be missed. It continues the Circus Oz tradition of high energy entertainment combined with political commentary, and introduces the fresh new artistic vision and aesthetic sensibility of the company’s incoming artistic director Rob Tannion. It is a politically savvy, entertaining, and polished work.

Tannion returned to Australia last year to take up the position after 22 years working in Europe and South America as a choreographer, director and senior creative in dance, theatre and circus. He takes over from former Circus Oz director Mike Finch. After 17 years, Finch left a significant legacy, which saw the company move into a new purpose-built space in Melbourne, increase its international profile, develop important initiatives such as the BLAKflip training program for young Aboriginal performers and uphold its 40-year commitment to politically driven circus, diversity and gender equality. 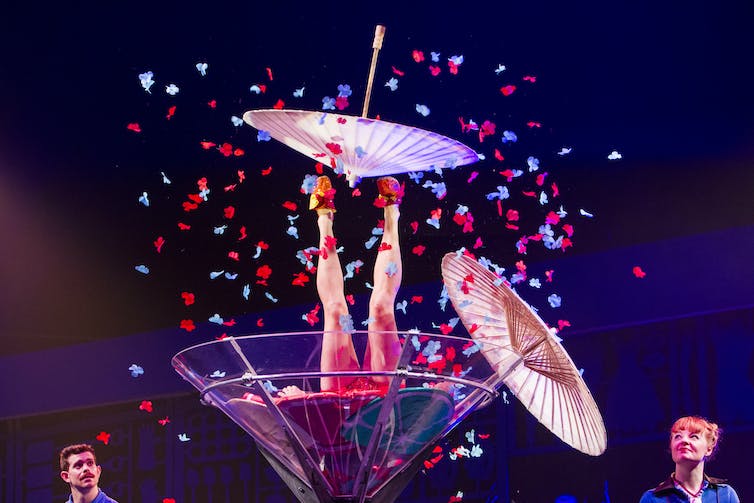 A martini glass becomes a setting for a juggling act. JamieWilliams

So it was with a great deal of expectation that the Sydney first night audience of circus community members, festival directors, politicians, funding body representatives and general public gathered to see Tannion’s debut for Circus Oz.

Model Citizens features production designer Michael Baxter’s gigantic everyday objects, which dwarf the performers. These create a sense of spatial disorientation for the audience and serve as means of re-imagining traditional circus apparatus.

An enormous safety pin doubles as a pair of Chinese poles on which the dynamic acrobats Lachlan Sukroo and Jake Silvestro perform. A giant clothes peg becomes a spring board for acrobatic tricks. Over-sized model credit cards - in a contemporary take on the traditional chair balancing act - are stacked into a high tower by performer Mitch Jones. He then climbs it, before the whole flimsy structure collapses. It is a physical metaphor for the dangers of living on extended credit.

Highlights in this high energy show include acrobat/musician Alex Weibel Weibel in an extraordinary rope walking act. He plays violin while balancing on a rope on one foot, and performs mid-air aerial cartwheels by holding on to four ropes simultaneously. Annalise Moore is a standout artist showing precision and poise in her hand-balancing and her fearless partnering work.

Jarred Dewey grabs the attention in a witty and inventive contortion routine in which his feet are attached to giant steam irons, and in a gender-bending solo trapeze act in red high-heeled shoes.

Freyja Edney twirling hula hoops impresses with her control and dynamism. Tania Cervantes Chamorro on aerial slings and Rose Chalker McGann on tissu are both outstanding. Tara Silcock moves effortlessly from clown, to acrobat, to a foot juggler balancing large scale cocktail umbrellas while lying in a giant Martini glass. 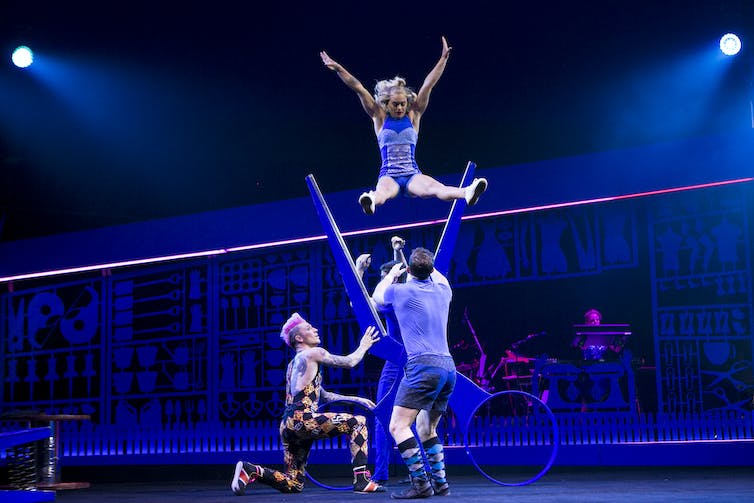 The Circus Oz commitment to gender equality is alive and well in this show. At one point at the end of an all-women acrobatic sequence, Edney bases Silcock on her shoulders who in turn bases Moore at the top to create an all-female human pyramid. Not content with that, Cervantes Chamorro and Chalker McGann then step up onto Edney so she is, in effect, supporting four women. Not surprisingly, this demonstration of sheer strength and willpower brought the house down.

The real success of Model Citizens lies in the seamless intertwining of entertainment with political and social commentary. Satirical songs include “I love diversity … just not in my backyard” performed by Freyja Edney and “Worship my Weber” by musician Jeremy Hopkins. Another scene features a flaming “Adani-fired barbeque” which threatens to roast Mitch Jones alive for “not paying his bills” as he attempts to escape from a straightjacket whilst hanging upside down above the flames.

The onstage action is well supported by the live music driven by Hopkins’s powerhouse percussion and musical director Ania Reynolds’s inventive keyboards, with appearances by Weibel Weibel on violin, and the show stopper, an electric guitar solo from the show’s sound engineer and operator, Reuben Hopkins.

The final scene involves a rope bridge, spanning the entire width of the stage. This unusual and bespoke apparatus transforms into an aerial jungle gym for the whole ensemble to perform unique forms of partner work, acrobatics, balancing and contortion.

By the time the entire cast of circus artists and musicians took their bows at the end of this act on the Sydney opening night, the entire audience were on their feet, whooping and cheering.

Model Citizens will be performed as part of the Sydney Festival until January 28.