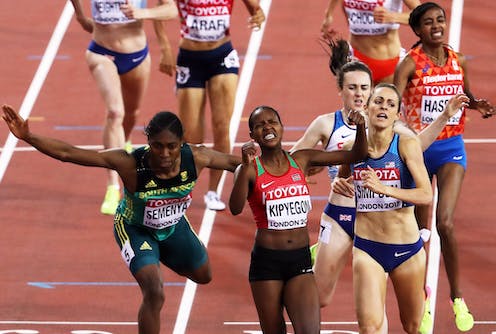 In many areas, gender equality has been improving gradually. But this is not the case in sport, where women continue to be banned for being insufficiently feminine to be permitted to compete.

In our research we argue that one way to move beyond problematic gender barriers is to eradicate sex segregation completely and replace it with a system similar to that used in Paralympic sport.

A history of discrimination against female athletes

Historically, women have been required to undergo humiliating sex testing procedures in order to compete in sport. More recently, such testing has been suspended owing to the lack of consensus about which traits make someone male or female.

This issue reached public consciousness through the case of Caster Semenya, the 2008 800m world champion who was banned from competition for two years on the grounds of appearing masculine and having high levels of testosterone.

In 2012, several women underwent surgery in order to meet the requirements to compete in the women’s events at the Olympic Games, even though they had always identified as women and externally appeared to be women.

Women are not the only group who receive a poor deal in sport. While weight classes in some sports allow smaller athletes a chance at success, there is no such consideration for other traits, such as height. This means that shorter athletes never have a chance in events such as high jump, volleyball and basketball.

Other athletes are lucky enough to have advantageous traits that do not lead to a ban. For example, they have greater aerobic capacity or stronger fast-twitch fibres (which contract quickly, but get tired fast). But it is not considered unfair for other athletes to compete against them, as it would be if their weight were too high or they were men rather than women.

It’s been solved in the Paralympics

Paralympic sport has been forced to deal much more closely with the issue of classification owing to the range of bodies that compete.

In the 1990s, the classification system changed to one that was based on functional ability rather than on medical conditions. It continues today, where rather than labelling athletes as having a particular medical condition, they are placed in a racing category based on the movements their body can perform, related to the sport they compete in.

We suggest that in able-bodied sport, it would similarly make sense to remove the label of male or female and replace it with categories based on the ability of bodies to move in that particular sport. This is a confronting notion, as we are not used to thinking about sex and gender as based on particular traits.

In sport, movement is based on physical ability, which is not necessarily linked to sex. In each sport, it would be possible to identify the characteristics which make up a successful athletes and create categories based on those rather than on sex.

In another example, in sports such as high jump, volleyball and basketball, athletes could be classified according to muscle mass and height.

Finally, in an endurance sport, athletes could be classified according to muscle mass and lung capacity. An example of categories under our alternative model is presented below.

Given society is structured so strongly along gendered lines, the public would be unlikely to find this idea easy to accept. We are not used to men competing against women.

However, several studies have found that the more men play against women, the more they come to accept that women can be good athletes, which suggests it is worth pursuing.