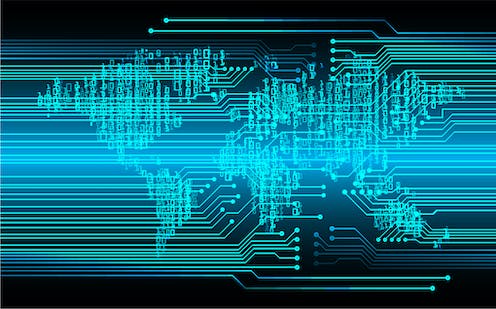 Australia’s “national security” government has found yet another credential to add to its claim that it’s protecting the country’s future. Prime Minister Malcolm Turnbull launched a new Defence Export...

Australia’s “national security” government has found yet another credential to add to its claim that it’s protecting the country’s future. Prime Minister Malcolm Turnbull launched a new Defence Export Strategy this week to catapult Australia into the top 10 defence exporting countries in the world by 2028.

Broadly speaking, the plan’s main premise is that if Australia is going to retool its defence industry over the coming decade to lift the production of Australian-made military equipment and services, then the government and industry itself should take the opportunity to export the same products and services.

Just as importantly, the strategy notes, if domestic producers are to prosper and succeed in playing their part, they will need bigger markets than the Australian armed forces can provide.

There are at least three big questions that can be raised about the plan.

First, we can wonder just how Australia hopes to achieve the 800% growth in sales represented by the “top 10” ambition in a highly competitive market place.

Between 2012 and 2016, according to a report released by Stockholm International Peace Research Institute (SIPRI), countries near the bottom of the list of top 10 exporters (Spain, Italy, Ukraine and Israel) each had eight times more defence exports by value than Australia. 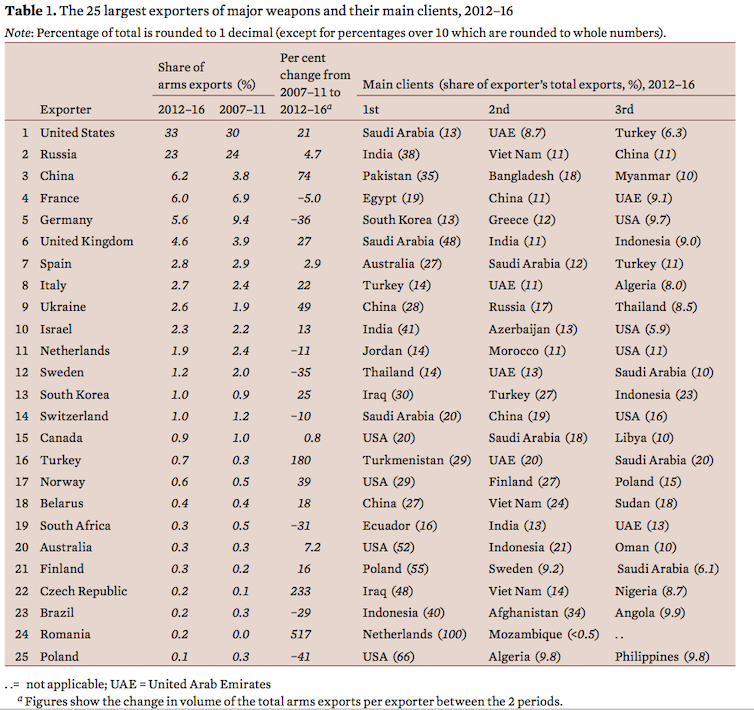 SIPRI A second question concerns the national innovation strategy that would be needed to achieve such a massive improvement. One day after the Prime minister’s new push for arms exports, the Chairman of the Board of Innovation and Science Australia, Bill Ferris, released Australia 2030 – a strategic plan for the Australian innovation, science and research system out to 2030 – commissioned by the government. The report identified five things that need to change urgently: education, industry, government, research and development, and culture and ambition. Without going into detail here, that is quite some agenda for radical and comprehensive change. It is as needed in defence industry as in the economy as a whole. Read more: 'Cyber revolution' in Australian Defence Force demands rethink of staff, training and policy A third question is the diplomacy of selling weapons into conflict zones or to governments with troubled human rights records. The government dismissed this concern by saying the main recipients of our defence exports are close allies. However, the 2017 SIPRI Trends in international arms transfers report lists Indonesia and Oman – with their poor human rights records – as the second and third most important military markets for Australia after the United States. Making defence a cutting edge industry So, if the aims of the strategy are broadly credible, but there are some questions about pace and ambition, what are we to make of it? Its success will hinge on whether key stakeholders, especially the government, industry and academia, truly understand the meaning of the main goal: to, as the report says, transform the Australian defence industry into the high-tech, agile and cutting-edge industry we need to assure our future defence and national security. The Ferris report singled out the medical sector as the one with most potential for innovation and export growth. In contrast, the Defence Export Strategy is agnostic as to choice of sector or focus. Selling components for weapon systems is painted as the same as selling military vehicles or radars. Picking winners may not be sensible in a globalised free market sector such as medical services, but there are some choices in the defence sector that the Turnbull government should be making. Read more: Cyber peacekeeping is integral in an era of cyberwar – here's why Playing to our strengths Australia has a significant comparative advantage in cyber security knowledge and skills. The country is seen by insiders as being in the top ten in that field already, largely because of its decades of experience working inside the “five eyes” intelligence alliance. Admittedly, the domestic industry doesn’t yet reflect that strength. But a focus on high-tech military industry development by the defence ministers would play not just to our natural strengths, but also to the need to sell mainly to close allies. (We would only sell such military exports to our closest allies). More importantly, cyber science is not a sector, it is the essence of all military high technology. Australian universities already export their technology research to the United States through grants from the Pentagon. Several Australian technology startups have been acquired by US military giants. That includes the purchase of Canberra company, M5, by Northrop Grumman. Australian technology company, Atlassian, provides secure web services to the Pentagon. The government is yet to release its Defence Industrial Capability Plan so maybe it is too soon to tell whether or not Australia’s cyber industry will take a privileged spot. But to date, most key power holders in Australian industrial development have responded only episodically to the challenges and opportunities represented by the information age. Austcyber, the cyber security growth and innovation centre set up by the government, is just one year old. Read more: Cyber attacks ten years on: from disruption to disinformation Australia must build “industries of the future”, according to a multi-year multi-author series of studies led by the Australian Council of Learned Academies (ACOLA), culminating in the book Securing Australia’s Future. This simple message, and many of the fine nuances of the ACOLA work about what makes a national innovation system, find little reflection in the Defence Export Strategy. Between 2012 and 2014, China decided on its “industries of the future” for defence and security purposes – including for export – and they are all cyber-related. Australia should choose as decisively. We can do it, but we need to first build the critical mass of cyber-educated innovators needed for more rapid takeoff. Investing very heavily in the military cyber sector may be the only pathway to begin to approach 800% growth in defence exports by 2028.