The announcement that North and South Korean athletes would march together under one flag at the 2018 Winter Olympics in Pyeongchang and field a joint women’s hockey team has been hailed as a sports diplomatic breakthrough.

Diplomatic overtures during sporting events are not unusual. Sports have long been seen as apolitical spaces where athletes from adversarial countries can mingle, become friends and overcome the chauvinism that leads to war.

The promotion of world peace is one of the Olympic movement’s stated goals. The Olympic Charter urges leaders:

… to place sport at the service of the harmonious development of humankind, with a view to promoting a peaceful society concerned with the preservation of human dignity.

But despite Olympic organisers’ powerful rhetoric, they have only very limited ability to promote peace between warring nations.

Read more: The Winter Olympics and the two Koreas: how sport diplomacy could save the world

Hark back to history

The Olympic Truce was a crucial component of Ancient Greek Games. Every four years, hundreds of athletes from across Greece met at Olympia under the protection of a sacred truce (ekecheria) that brought a halt to the yearly cycle of violent city-state warfare and inaugurated a month-long festival of athleticism.

The truce made the Games possible: it allowed athletes and spectators to travel in complete safety to participate.

The notion of an Olympic Truce re-emerged when the modern Olympics resumed in 1894. The IOC’s founder, Pierre de Coubertin, hoped the competition would promote world peace. He said:

Wars break out because nations misunderstand each other. We shall no have peace until the prejudices which now separate the different races shall have been outlived. To attain this end, what better means than to bring the youth of all countries periodically together for amicable trials of muscular strength and agility.

Past opportunities for peace

The Olympic Games have provided several opportunities for international reconciliation, particularly during the global upheaval of the 1990s.

Following the collapse of the Soviet Union, athletes from 12 of the former Soviet republics competed as members of a unified team at the 1992 Barcelona Olympics. The unified athletes took home more medals than any other team. Their victories were seen as a symbol of “hope, solidarity, and sportsmanship over totalitarianism”.

Similarly, during the wars in the Balkans, the IOC co-ordinated to allow athletes from the post-Yugoslavian states to compete. At the 1994 Lillehammer Olympics the Bosnian-Herzegovina Olympic Committee fielded a mixed bobsled team with Russian Orthodox, Catholic and Muslim athletes.

The Olympic Truce continues to be a priority for sport administrators because they see sport as able to promote peace globally and in local communities.

In 1993, the IOC reached out to the United Nations, which passed a resolution calling for a global ceasefire during the Lillehammer Games. The UN has renewed that resolution for every subsequent Olympics.

In 2000, the IOC founded the International Olympic Truce Foundation and adopted the dove as an Olympic symbol. The 2012 London Olympics was the first in which every nation present – 193 countries – signed onto an Olympic Truce.

The IOC’s current peace initiatives include preventing youth violence in Colombia, anti-crime projects in the favelas of Rio de Janeiro, and community pilot programs for peace in Jamaica. 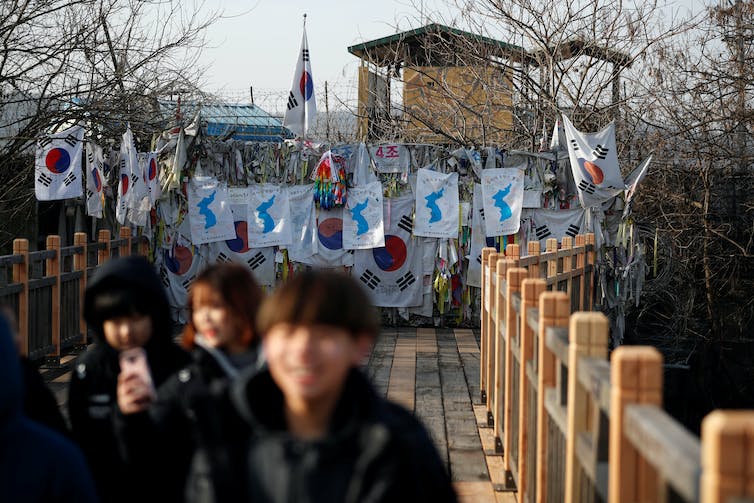 North and South Korean athletes will march under the one flag at the Pyeongchang Olympics opening ceremony. Reuters/Kim Hong-Ji

The Olympics has its limits

However, the Olympics did not end either of the two world wars. War actually stopped Olympic Games from taking place: they were not held between 1912 and 1920, and 1936 and 1948.

North and South Korea remain technically at war despite the two countries having competed together or marched under a unified flag nine times since the 2000 Sydney Olympics.

The Olympics can also provoke international confrontations or be a site where international tensions are played out. The Nazi regime used the 1936 Berlin Olympics to promote their fascist and racist agenda. Contemporaries understood these Games as a confrontation between democracy and totalitarianism.

Throughout the Cold War, the US and the Soviet Union channelled their international conflict through the Olympics. When the Cold War warmed up in the 1980s, each side boycotted the Olympics once: the US stayed home during the 1980 Moscow Olympics and the Russians responded with a boycott of the 1984 Los Angeles Olympics.

In 1912, de Coubertin wrote an ode to Olympic peace. The sixth stanza begins:

O Sport, You are Peace! You forge happy bonds between the peoples …. Through you the young of the entire world learn to respect one another.

At the 2018 Pyeongchang Olympics, both reconciliation and struggle narratives will be visible. The two Koreas will march together under one flag. But the ban on Russian athletes for doping has been framed in Russia in the language of the Cold War: it has been described as a “part of a Western plot to overthrow the Russian government”.

Twitter bots allegedly associated with Russian intelligence agencies have started an online campaign against the Pyeongchang Olympics with the hashtag #NoRussiaNoGames. Who knows what those bots will do when the Games begin?