Consuming sugar-sweetened drinks is associated with a range of health issues including weight gain and obesity. These are risk factors for diabetes, heart disease, high blood pressure, strokes and certain cancers.

Taxing these drinks is an effective means of reducing their consumption and related health issues – as well as generating revenue for the government.

A recent study in the Journal of Epidemiology and Community set out to test whether a sugar tax might impact on other behaviours affecting public health, along with whether such a tax would prompt people to choose no- or low-calorie drinks.

The researchers ended up finding an association between higher soft-drink prices and higher demand for some alcoholic beverages in terms of family food and drink purchases.

They did not find that a sugar tax, let alone higher soft drink prices, caused people to drink more lager, as news reports suggest. In fact, the study provided no direct evidence a sugar tax will lead alcohol sales to increase.

How was the study conducted?

In this study, researchers from the London School of Hygiene & Tropical Medicine estimated elasticity of demand on non-alcoholic and alcoholic drinks in the UK, based on households’ response to price differences in sugary drinks.

They used existing consumer survey expenditure data collected between 2012 and 2013 from nearly 32,000 households.

Households recorded their individual groceries and drinks they had purchased and brought home using scanned bar codes (or manually entered them if there was no bar code). The researchers tracked how much the household spent, where they purchased, the day of purchase and volume of beverage purchased.

They didn’t track consumption, or drinks which were bought and consumed elsewhere (for instance, in a bar or at a tuckshop), just the purchase of these products.

The results were mixed, with variations between beverage types and income groups. There were several key outcomes.

In families where the price paid for high sugar-sweetened beverages such as Coke and Red Bull was higher, there were greater purchases of lager (such as Stella Artois, Beck’s or Corona), but less purchasing of spirits.

Where the price paid for medium sugar-sweetened drinks (including Fanta, Sprite and Powerade) was higher, there were fewer purchases of beer, lager and wines, but more of spirits.

Higher prices for diet or low sugar-sweetened drinks were associated with higher purchases of all alcoholic beverages except spirits, for which purchases were less.

Taking into account also relationships with other categories of drinks, the study concludes that a price increase for medium sugar-sweetened drinks would have the most significant positive impact from a public health perspective, given the drinks’ impact on dietary sugar and energy intake. 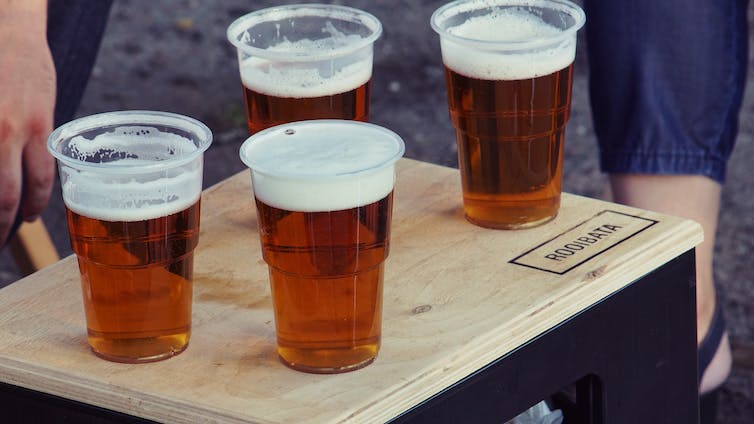 The amount of alcohol bought and drank outside of the home wasn’t taken into account in the study. Photo by Julia Nastogadka on Unsplash

How we should read the results

In principle, elasticity is about what happens over time when there is a change – such as a new tax – which results in a higher price.

But because the study isn’t actually measuring and correlating the change that elasticities would measure – a new tax and the change in consumption over time – it offers no direct evidence of what would happen in case of a change like a new tax, and should not be interpreted as having done so.

It is commonplace in economics to estimate elasticities this way, as a kind of modelling of what might happen with an actual price change, so it is not wrong for the authors to follow this common procedure. We just need to be careful how we interpret the results.

The study results indicate that an increase in the price of sugar-sweetened drinks potentially has both positive and negative impacts, from a public health perspective, on the consumption of alcoholic beverages. It suggests more nuanced price options across different ranges of beverages should be considered rather than a single tax only on high-sugar-sweetened beverages.

Read more: A sugary drinks tax could recoup some of the costs of obesity while preventing it

The paper’s unspoken contribution: counting the calories in alcoholic drinks

The paper takes for granted that the calories in alcohol drinks count when thinking about avoiding obesity. But alcohol is often overlooked when we are thinking about calories and obesity.

And it is not easy for consumers to take the calories in alcohol drinks into account. Unlike for every other packaged food or drink sold in Australia, the caloric content does not have to be listed on the label of alcoholic beverages. So one important contribution of the article is to underline that, aside from being intoxicating, alcoholic beverages are also high in calories.

As the paper points out, a bottle of lager beer contains slightly more calories than a can of Coca-Cola. This means arguments for discouraging obesity with a tax on drinks might well be directed at alcohol content as well as sugar content.