When even teachers and police workers need to travel to the city fringes to find an affordable home that strikes us as a sign of a deeply dysfunctional housing system. Our research shows key workers are being squeezed out of Sydney by a housing market which has left them behind. Yet Sydney stands out among global cities, like New York, London and San Francisco, for having neglected the housing needs of its essential workforce.

In our study, we identify five strategies to tackle the problem. These could make a real difference for key workers and other moderate income earners.

Forced out to the fringes

Our study shows key workers are more concentrated on the metropolitan fringe compared to the labour force generally. And this trend is intensifying.

Over the decade 2006-2016, we found that inner areas of Sydney as well as middle ring areas, including Ryde and Parramatta, lost up to 21.4% of their key worker populations. The largest influxes of key workers were in far-flung Illawarra (a net gain of 10.5%), Hunter Valley (13.6%) and Southern Highlands (17%). 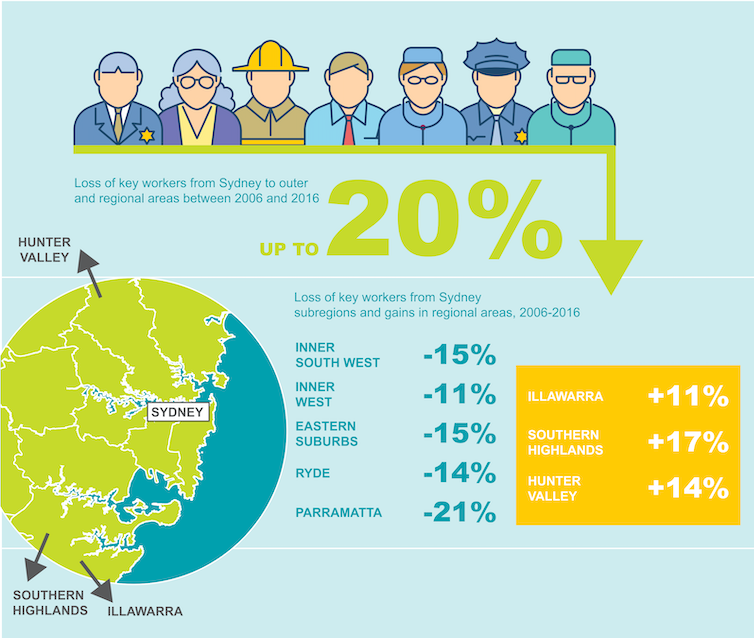 Some areas of Sydney have lost many of their key workers. Key Worker Housing Affordability in Sydney, Author provided

Barriers to buying a home

They’re not getting rich while teaching our children or caring for our sick, but the stability of their service-oriented professions usually meant home ownership was a realistic expectation. However, over the past decade, younger key workers have faced new barriers to home ownership.

One of these is the deposit gap. This refers to the number of years it takes to save a deposit on a median-priced home. Most lenders now require a 20% deposit.

Single key workers now need nearly nine years to save a deposit for a dwelling in Sydney’s outer suburbs. Couples on two incomes need to save for more than five years.

Where can key workers afford to live?

To examine where key workers can afford to buy a house we used affordable price thresholds, based on bank lending criteria and assuming a 20% deposit. Again, this analysis showed key workers have very limited choices. Even a senior constable earning around A$98,000 a year is limited to outer Sydney, with the closest options being Penrith and Campbelltown. 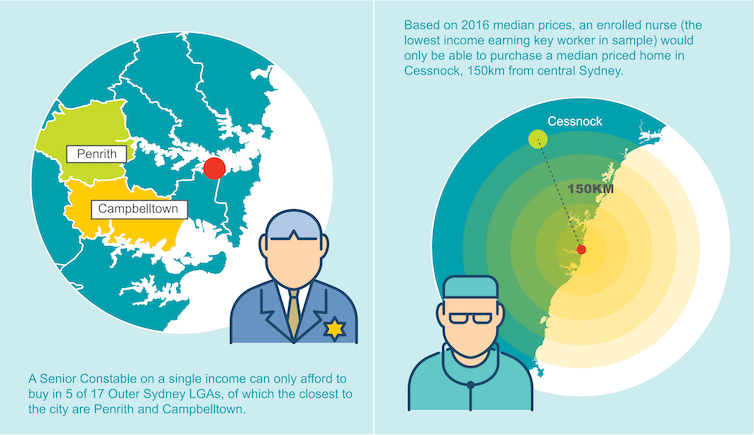 These long commutes take a toll on their families and finances. Sydney high school teacher Kim Timmins explained in a recent opinion piece:

We made the difficult decision last year to leave our network of family and friends and make the move to the uppermost parts of the Central Coast, the closest place we could afford to buy a home big enough for our growing family. … Our commute is a mix of car and train throughout the week … a complete drain before the day at school and hospital begin, and an economic disadvantage in terms of car travel costs.

What should be done

Key workers have traditionally aspired to, and achieved, home ownership. But those not already on the property ladder face a median house price of around A$900,000 in Sydney. An affordable price for most key workers would be around A$650,000.

To bring home ownership into reach, a shared equity model would allow key workers to buy up to 75% of the home’s value. This would reduce deposit requirements to between 5% and 10% and also make loan repayments more manageable.

Shared equity schemes are offered in South Australia under the government’s HomeStart finance organisation. This has helped many low and moderate income earners into their first home.

“Collaborative” development and financing models provide an alternative to conventional multi-unit housing developments. Under these models, individuals are supported in collectively developing a residential project.

The group members collaborate to acquire a site, appoint an architect and manage professionals through planning and construction. Groups are able to save on developer premiums. They can also customise their building and apartments in ways that save on both capital and recurrent costs.

The Nightingale projects in Victoria are an example of this approach. Participants in these schemes can save around 10-12% on prices for comparable apartments.

Alternative tenure arrangements, such as community land trusts, can separate the cost of a dwelling from the cost of land (retained by government or the trust). Under this model, homes are purchased with a conventional mortgage and/or the land component is rented at a marginal rate. Community land trusts are well established in the UK and US, but yet to attract serious policy support in Australia.

Savings in housing design and construction could help increase the supply of affordable homes, provided these savings are passed on to eligible buyers. Innovations in design and construction, as well as reduced requirements for facilities such as car parking (in accessible locations) could reduce costs by up to 25-35%. That equates to savings of A$75,000 to A$100,000 for two-to-three-bedroom units or townhouses.

Inclusionary planning requires that a proportion of new housing development be affordable for moderate or low income groups. This approach can support various combinations of affordable housing, to be made available as permanent rental housing or sold on the market. Mandating that 20% of dwellings in all major new housing developments are affordable for moderate income earners, including key workers, could deliver 6,000 to 7,000 affordable “start-up” homes per year in Sydney.

Governments seem to be hoping that slowdowns in Sydney and Melbourne prices, combined with first home buyer stamp duty concessions, have fixed the housing affordability problem. It’s true that regulatory intervention to restrict interest-only loans to 30% of new residential mortgage loans has cooled some investor demand.

However, the housing boom added 70% to Sydney prices from the trough to the peak. This disrupted the home-ownership trajectory of key workers, and in turn added to pressure on the operation of our essential services.

Key workers who don’t own homes may increasingly opt to leave Sydney’s unaffordable housing market. Ultimately, they may seek work in regional New South Wales or elsewhere in Australia. Sydney can ill afford to lose them.