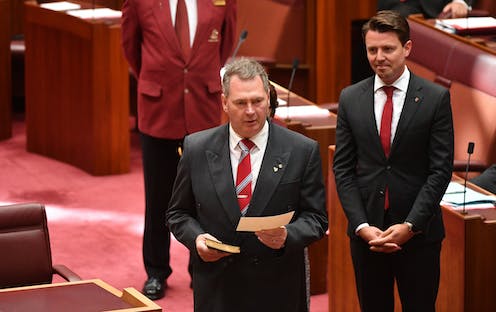 In Tasmania, Labor won five of 12 Senate seats at the election, the Liberals four, the Greens two, and the Jacqui Lambie Network (JLN) one. The original long-term allocation was two Liberals, two Labor, one Green, and one JLN. However, the Senate – with opposition from only the Greens and two crossbenchers – changed the Tasmanian Senate long terms to three Liberals, two Labor, and one Green. The Liberals gained a long term at the JLN’s expense.

This outcome distorts the election result. Labor won five seats, but only gets two long terms, while the Liberals won four seats but get three long terms.

The Liberals will now be defending only one Tasmanian Senate seat at the next election. They are very likely to win at least two of six, so a Liberal gain is effectively locked in.

The motion passed by the Senate was a fix for the issue of disqualified long-term senators being replaced by someone who did not originally win a seat inheriting their term. Three of the terms altered are not controversial.

In Western Australia, the Greens’ number one Scott Ludlam was disqualified, and replaced by number three Jordon Steele-John, who originally inherited Ludlam’s long term. Now, the party’s number two, Rachel Siewert, will have a long term, while Steele-John receives a short term.

The Liberals’ gain of a long term in Tasmania was due to the high below-the-line voting in that state. The order-of-election method rewards parties that win full quotas (1/13 of the vote, or 7.7% at double dissolutions). On the original count, Lambie had just over a full quota, but about 40% of her votes were below-the-line. Unlike ticket votes, below-the-line voters choose their preferences.

When Lambie was disqualified, Martin did not win a full quota, as some Lambie below-the-line voters did not have him as number two on their ticket. As a result, he lost his place in the top six using the order-of-election method.

Labor won 33.6% of the Tasmanian Senate vote to 32.5% for the Liberals. But Labor had more below-the-line votes than the Liberals, with Labor’s Lisa Singh winning from number six on the ticket.

Ironically, this distortion was caused by the below-the-line votes. If only ticket votes had been used, Martin would have received a long term.

The High Court has ruled that Martin’s Devonport mayoralty does not disqualify him from sitting in the Senate. This decision means people in local government do not need to resign before contesting federal elections.

Lambie expelled Martin from her party as he refused to resign his seat and allow her to retake it. Martin will sit as an independent.

In another Section 44 case, the High Court ruled on Tuesday that SA-BEST’s disqualified senator Skye Kakoschke-Moore cannot replace herself, and SA-BEST’s number four, Tim Storer, will win that seat – even though he has since been expelled from the party.

Read more: With Feeney gone, Greens sniff a chance in Batman, and has Xenophon's bubble burst in South Australia?

38% thought cutting company taxes would simply deliver business A$50 billion more in profits, and would not result in higher wages. 32% thought cutting company taxes would attract more investment, create jobs, and increase wages. By 72-10, voters would approve of forcing businesses to pass on a proportion of tax cuts as pay rises to their workers.

By 58-25, voters thought the Adani coal mine would create jobs that Queensland badly needs. However, voters also thought it would undermine tourism jobs (53-22), divert renewable energy investment (51-25), and undermine action on climate change (52-26). Queenslanders were more likely to agree with the first statement and less likely to agree with the last three statements.

A Queensland Galaxy poll, conducted February 7-8 from a sample of 860, gave the federal Coalition a 52-48 lead in Queensland, a one-point gain for the Coalition since August. Primary votes were 41% Coalition (up four), 32% Labor (steady), 10% Greens (up three), and 9% One Nation (down three).

The swing to federal Labor in this poll since the 2016 election is just two points, which is a disappointing result for the party. Labor would not win many additional seats in Queensland if this poll was replicated at a federal election.

41% supported and 41% opposed the development of the Adani coal mine. In southeast Queensland, oppose led 43-38, while support led in the rest of Queensland by 45-37.

One Nation’s drop is worse than it looks, as it only contested 61 of 93 seats at the election. However, this poll would have asked for statewide support.

44% approved of Queensland Premier Annastacia Palaszczuk (up three since early November), and 38% disapproved (down four), for a net approval of +6. Opposition Leader Deb Frecklington had initial ratings of 29% approve, 25% disapprove.