The canvas of white currently fascinating many viewers of the Winter Olympics in Pyeongchang may seem totally foreign to those more used to watching sport played under the summer sun. It is grey and cold in the South Korean alpine town. Temperatures drop below -10℃ at night.

Many might have questions about how elite athletes can perform to their best in such cold conditions. So, what’s happening to the body in the cold. What stresses does it experience? And what about injury?

What happens to muscle in the cold?

If human muscle is cooled by one degree, it loses 2-5% of its performance. A whole host of muscle properties can be affected, such as the time it takes a muscle to generate peak tension and then the time to relax from this peak.

Cold also disrupts the nervous impulses that control muscle through changes in activation patterns. So, there may be a delay in the sequence in which muscle activates to create and control movement. This equates to about a 10-20% loss in vertical jump height and a reduction of up to 25% in peak muscle power.

For a landing, the limbs and joints become stiffer. This means much more force gets absorbed by a body’s trunk rather than in the lower limbs.

The losses in performance have been attributed to an increase in thickness of the fluid in muscle and joints, as well as the disruption of nervous input to muscle.

How does this translate to sporting performance?

In the longer events like cross-country and the longer downhill skiing runs, generating muscle heat isn’t as much of an issue. The events are long enough to allow elevated metabolism to generate enough body heat to offset the effects of the cold temperature.

But in the shorter events – like aerial skiing, moguls, ski jumping and many of the snowboarding events – getting a good warm-up and maintaining the heat close to the skin are imperative.

Modern winter sport clothing relies on layering to maintain warmth. Athletes generally layer up with a next-to-skin garment, a mid-layer insulation, and an outer layer to protect from the wind and water. The next-to-skin layer is commonly worn to keep skin temperatures (and hopefully muscle temperatures) up.

Many athletes are now also using warming cuffs or pads which they remove just before their event. These self-warming devices fit over the next-to-skin garment and maintain the warmth around the large muscles and joints of the lower limbs.

But what if you don’t have the luxury of being an elite athlete?

The next time you hit the snow or exercise in the cold and don’t have the benefit of self-warming garments, take the time to warm up – thoroughly. This increases your metabolism and, in turn, warms the body from within.

Next, try to maintain the muscle temperature by wearing an insulated, next-to-skin garment that holds some of the heat generated.

And if you’re on a chairlift preparing to ski, remember that your muscles are cooling and losing some of their force and power-generating potential. Do a short secondary warm-up at the top of the run, or start up slow and build into the run. 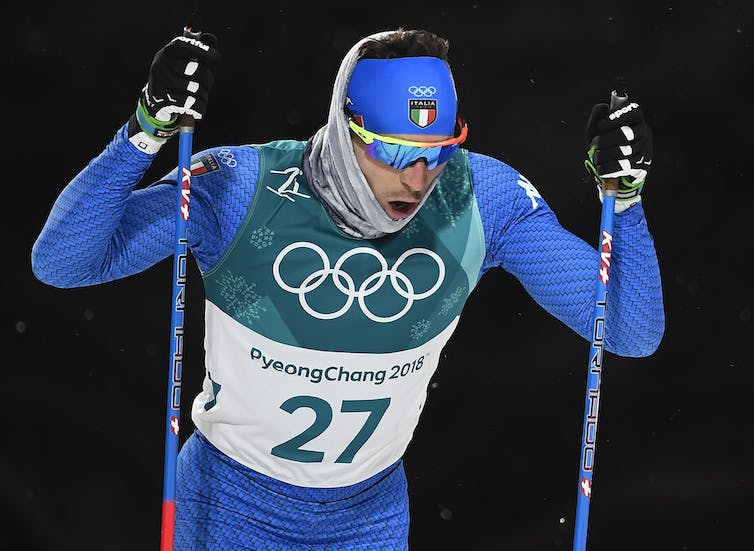 The most popular winter sports – downhill skiing and snowboarding – have quite high injury rates, mostly to the lower limbs. Improper techniques – especially landing techniques – have been linked to many of these injuries.

While watching the Pyeonchang Olympics on your couch, spare a thought for the changes in the body caused by the environment these athletes compete in. It fundamentally changes the body parts they rely on to carve, flip, twist, turn, slide, grab and generally shred up the Games’ white canvas.