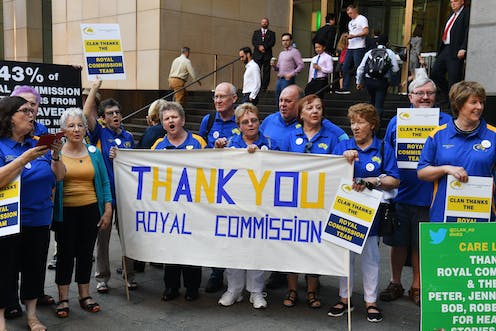 No other government redress scheme has included children who were abused both in care and not in care.AAP/Mick Tsikas

The proposed Commonwealth redress scheme for victims of child sexual abuse is a first step toward creating a national redress scheme. Should a national scheme result, it will be unlike any other in the world.

The proposed Commonwealth redress scheme for victims of child sexual abuse is a first step toward creating a national redress scheme. Should a national scheme result, it will be unlike any other in the world.

There are (or have been) 36 major government schemes for institutional abuse of children in 13 countries (and one independent polity). But the proposed national scheme in Australia is more complex, bigger, and includes more sites of abuse than any other.

For complexity, it has different claimant groups, diverse offending organisations, federal-state governance, shared costs of government and non-government organisations, and will need to account for previous payments survivors received for abuse.

For size, the expected number of eligible claimants – validated and awarded a monetary payment – is larger than any other scheme using an individualised assessment of abuse and impact. The estimated number is 60,000; the two other largest schemes have involved 31,500 (Canada) and 15,570 (Ireland) claimants.

For scope, the royal commission estimates the number of individual Australian institutions where sexual abuse of children occurred is 4,000. The numbers for the Canada and Ireland pale in significance, at about 140 residential schools and 144 industrial schools, reformatories, orphanages, special schools, and hospitals, respectively.

Read more: Listen to abuse survivors and advocates to clear the way to a national redress scheme

Care versus not in care

No other government scheme has included children who were abused both in care and not in care.

Virtually all government schemes have focused only on children who were placed in institutional or out-of-home care, including foster care. They lived in “closed” settings – such as residential facilities, homes, training schools, or detention centres – on a long-term basis, without a parent to care for them. This group is called “care-leavers”.

A second group – “non-care-leavers” – were abused in “open” settings such as schools, church parishes, clubs, and sports associations, often by clergy and members of religious orders, or lay staff in religious organisations.

Adjusting for multiple contexts of victimisation, those abused in out-of-home care or detention made up 44% of the 6,875 survivors who attended the royal commission’s private sessions to May 2017.

Australia’s proposed redress scheme is also unusual in focusing on sexual abuse alone: just 18% of government schemes for care-leavers do.

… were violated in every sense in an institution and being sexually used was just one of those violations.

What’s remembered is living in “constant fear of sexual abuse, [suffering] deprivation of food and schooling, forced labour, and medical neglect”, in addition to physical and sexual abuse.

Australian care-leavers are seeking redress for the state’s failure to carry out its duty of care, as survivors have done in other government redress schemes. But redress for institutional abuse is restricted in the Australian scheme. This was set in motion by the federal government’s terms of reference for the royal commission to focus on sexual abuse.

There is little doubt that what motivated Julia Gillard to establish the commission was clergy sexual abuse of children and cover-ups by the police and church authorities. Media attention then and now is fixed on this phenomenon, and often overlooks other victims and contexts of institutional child abuse.

Calling attention to group differences between care leavers and non-care-leavers does not suggest one group suffered more than the other. That is, and would be, wrong.

Rather, we should pay attention to group differences that matter for justice, with reference to the monetary payment. These are experiences of abuse and the social status of child victims.

Care-leavers lived in settings in which sexual abuse was both public and private, both direct and more diffuse in a sexualised and violent environment – one in which sexual abuse occurred in all spheres of living, working and sleeping. As children, care-leavers were considered and treated as low-status, as morally and socially inferior to other children.

Unless corrective action is taken, these differences may disadvantage care-leavers in assessing the monetary payment compared to non-care-leavers.

How will the monetary payment be decided?

The royal commission’s proposed matrix for deciding monetary payments recognises group differences (in the experiences of abuse, but not social status of child victims) by including a 20% factor for “additional elements” if a child was in care or a closed institution.

However, it can go further by giving explicit recognition to group differences in the context-dependent nature of sexual abuse, and in children’s social status. Otherwise, care-leavers will appear not to “measure up” to the presumed standard of non care leavers. This will occur in two ways.

This second claim is contentious. However, it comes from research on the impact of a “hierarchy of victimisation”, in which those of higher social status are treated as more deserving and credible victims.

Evidence also comes from a report prepared for the royal commission in which average payments in the Catholic Church’s Towards Healing protocol for sexual and physical abuse were compared. They were A$30,000 for abuse in residential care, but $50,000 to $55,000 for abuse in education and religious settings.

These averages, the report says, were “inconsistent with private session information”, which suggested “a higher severity of abuse in residential settings” compared to others.

What, then, is the way forward?

Those in charge of the redress scheme’s implementation must consider:

There must be continual review and reflection on the influences and biases that a child victim’s social status has in determining abuse severity and impact.

This will not result from intentional bias, but will take a more subtle – perhaps subconscious – form. It stems from two disparate survivor groups seeking justice in one redress scheme.