In an attempt to avoid a repeat of last year’s horror flu season, Health Minister Greg Hunt yesterday announced the government would fund two new flu vaccines in 2018 to try to better protect the elderly.

While influenza affects people of all ages, infections among the elderly are more likely to require hospitalisation or cause serious complications such as pneumonia and heart attacks. Of the 1,100 Australians who died last year from flu-related causes, 90% were aged 65 and over.

The two free vaccines for over-65s work in different ways: FluZone High Dose is a high-dose version; Fluad adds an additional ingredient to boost its effectiveness. Both are recommended for use only in people aged 65 and over. But neither is perfect. And it’s important to remember flu vaccines are, at best, only partially protective.

Why do we need new vaccines for flu?

Australia’s National Immunisation Program provides free influenza vaccine for the elderly, as well as other high-risk groups including pregnant women, those with chronic diseases and Indigenous Australians.

Older people’s immune systems don’t respond to flu vaccines as well as younger people’s. Recent studies have also shown that flu vaccines don’t appear to be as effective in the elderly at protecting against flu and its complications.

Compounding this problem is that the flu subtype that tends to affect older people (A/H3N2) is different to that which affects younger people (A/H1N1).

Although the seasonal flu vaccine now contains four strains to cover all the relevant subtypes present, the protection against H3N2 infection appears to be poorer than against other strains.

Two strategies are attempting to improve the effectiveness of flu vaccines. One is to increase the dose of the flu strains in the vaccine. This is the basis for Sanofi’s High Dose FluZone vaccine, which contains four times the amount of flu antigen than the standard dose.

Another way is to add a substance that improves the immune response, known as an adjuvant, in combination with the flu strains. This is the basis for Seqirus’ (CSL) Fluad vaccine, which contains the adjuvant MF59. This vaccine has been used overseas for many years, but has only been become available in Australia this year.

How much better are these vaccines than the current vaccine?

Compared to the standard flu vaccine, the high-dose version has been shown to better stimulate the immune system of older users to make protective antibodies.

It has been shown to better reduce rates of flu infection in over-65s than the standard vaccine. And, interestingly, it also seems to protect against pneumonia.

One common criticism of clinical trials is that they don’t include the types of people who are found in the “real world”. But population based observational studies suggest that the high-dose vaccine is more protective than the standard-dose vaccine where H3N2 is the predominant circulating strain – as it was last year.

What about the Fluad (adjuvanated) vaccine?

Compared to the standard vaccine, adjuvanted flu vaccine has been shown to better stimulate the immune system of older users to make protective antibodies.

Unlike the high-dose vaccine, there have not been clinical trials that show a difference in infection rates compared with the standard vaccine. But observational data suggests the adjuvanted vaccine is more protective against hospitalisation with influenza or pneumonia – to a similar degree as the high-dose vaccine.

One problem with both these vaccines is that they only contain three strains, rather than the four strains in the current vaccine. The strain missing from the new vaccines is an influenza B type. 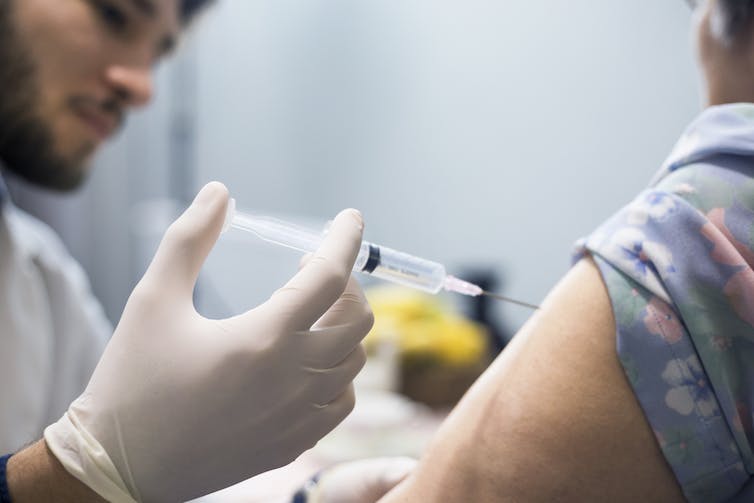 Are the new vaccines safe?

Both vaccines are safe, but commonly cause mild side effects, and very rarely can cause serious side effects. However, these risks from the vaccine are less than from getting influenza infection.

The main side effect of vaccines relates to their effect in stimulating the immune system. In many people they cause a sore arm and, less commonly, a fever. The side effects of these new flu vaccines are slightly more common than with standard vaccines. Generally, these side effects are mild and don’t last long.

None of the flu vaccines used in Australia contains live virus and therefore can’t cause flu infection. However, the vaccination season (April to June) usually occurs around the same time as when another respiratory virus (RSV) circulates, so this respiratory infection is commonly misattributed to vaccination.

Read more: Health Check: when is 'the flu' really a cold?

Rare but serious side effects, such as Guillain Barre Syndrome (where the immune system attacks nerves), have been described after flu vaccination. Studies suggest that the risk of these side effects are less common after the flu vaccine than after flu infection.

In 2009, an adjuvanted vaccine (Pandemrix) was thought to be implicated in cases of narcolepsy (a disease associated with excessive sleepiness) in Europe. However, this primarily occurred in children (rather than the elderly), and with a different adjuvant (ASO3) than is being used in Fluad (MF59)

Which vaccine should I get?

The two vaccines have not been compared head to head, so it isn’t known which one is better. The available data suggest they are similar to each other.

In practice, what vaccine you’ll receive will depend on what’s available at your GP or pharmacy.

The standard vaccine will still be available for younger people. There are no data to support the use of multiple doses of vaccines of the same or different types.

Read more: Flu is a tragic illness. How can we get more people to vaccinate?

Neither of the new vaccines is perfect – they simply reduce your risk of getting flu to a slightly greater effect than the standard vaccine. Like other flu vaccines, there is still the chance that the vaccine strains don’t match what’s circulating.

Despite the common perception that the flu is mild illness, it causes a significant number of deaths worldwide. To make an impact on this, we need better vaccines, better access to vaccines worldwide and new strategies, such as increasing the rate of vaccination in childhood.