But what puzzles astronomers is why the two extremes – what about intermediate-sized black holes?

Black holes were predicted by Albert Einstein’s general theory of relativity. Their gravity is so strong that no material object, not even light, can escape from their vicinity.

Read more: Something big exploded in a galaxy far, far away: what was it?

Astronomers have only been able to obtain evidence for their existence in recent decades by studying black holes accreting (attracting) gas from nearby stars and finding fast-moving stars in the vicinity of black holes.

But since 2015 an exciting third way to detect black holes has become available: gravitational waves from merging black holes.

Stellar mass black holes can have masses between a few to a few tens of solar masses – the mass of our Sun. They are thought to form at the end of the lives of massive stars. When these stars run out of gas from which to produce energy, they leave behind massive remnants that can only collapse into black holes.

So far, astronomers have discovered a dozen stellar mass black hole candidates in the Milky Way, most of which accrete matter from nearby companion stars.

It’s estimated that our Milky Way alone should contain about 100 million stellar mass black holes, most of which do not have close companions from which they can accrete matter, and which therefore stay invisible.

At the other end of the mass scale are what astronomers call supermassive black holes. These are about a million to a few billion times more massive than our Sun.

Astronomers think that almost every large galaxy contains a supermassive black hole at its centre.

The Milky Way, for example, contains a black hole of about 4 million solar masses, called Sagittarius A* (Sgr A*), in its centre. Astronomers can study this black hole by looking at the motion of stars that are close to Sgr A* and are flung through space by the huge gravitational attraction of the black hole.

Is that a supermassive black hole?

Observations show that some supermassive black holes already existed and were actively accreting gas from their surroundings when the universe was just a few hundred million years old. 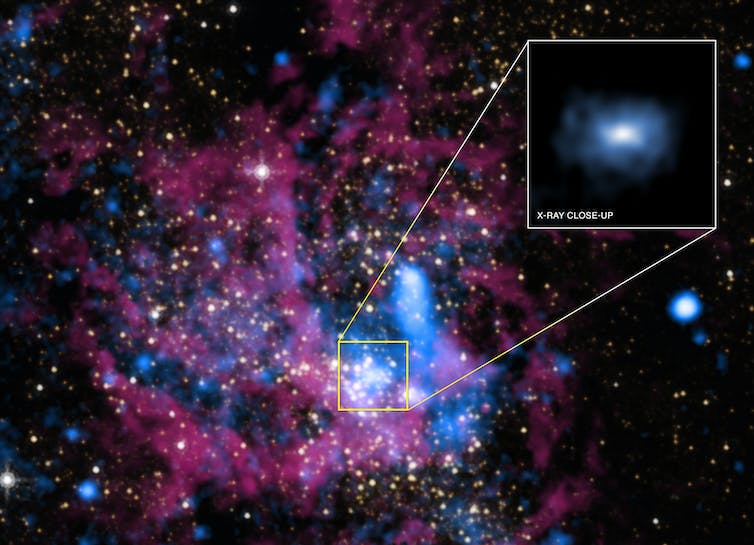 A composite x-ray and infrared image of the supermassive black hole Sagittarius A* at the centre of the Milky Way. NASA/UMass/D.Wang et al., IR: NASA/STScI

This creates a problem for theories that assume that supermassive black holes grew out of the stellar-mass black holes left behind by the first generation of stars in the early universe.

There is not enough time for these black holes to have grown to reach the huge masses that we can see in observations of the first galaxies.

The middle ground for black holes

Starting more massive, supermassive black holes would need less time to grow to their present sizes. They could also accrete mass more efficiently since the maximum amount of mass that a black hole can accrete is directly proportional to its size.

Intermediate mass black holes could form out of the collapse of very massive stars that might have existed in the very early universe.

Nowadays stars form with an upper mass limit of at most a few 100 solar masses. Conditions in the very early universe might have been more favourable towards building more massive stars and might have allowed the formation of stars of a few thousand or maybe even up to a million times the mass of our sun. 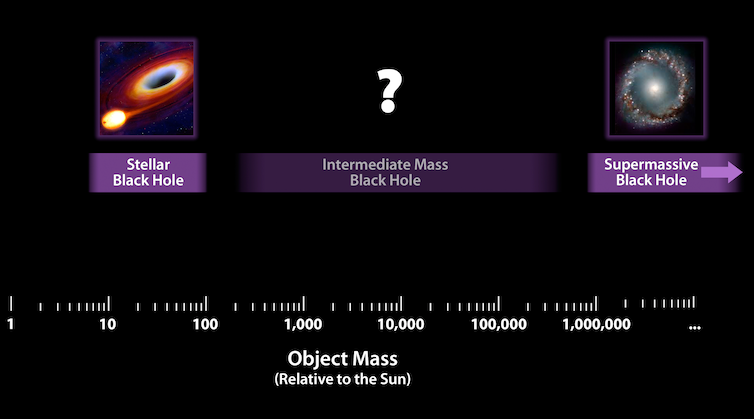 This chart illustrates the relative masses of stellar black holes and supermassive black holes, and the mystery of the intermediate-mass black holes, with masses up to more than 100,000 times that of our sun, remains unsolved. NASA/JPL-Caltech (edited)

The hunt is on

Astronomers are currently searching for intermediate mass black holes and there are a few potential candidates. Like their more massive cousins they could reveal their existence by accreting material from nearby stars or by the fast motion of nearby stars.

A prime place to look for intermediate mass black holes could be globular clusters, dense clusters of a few hundred thousand of stars to a few million of stars.

Read more: Black holes are even stranger than you can imagine

Like supermassive black holes, globular clusters are old and are among the first objects which have formed in the universe.

Astronomers – including at the University of Queensland – recently found evidence that such an intermediate mass black hole with about 2,200 times the mass of our Sun could exist at the centre of the globular cluster 47 Tucanae.

They did this by studying the acceleration of pulsars (compact remnants of dead stars that formed with about 20 times the mass of our Sun) in the globular cluster.