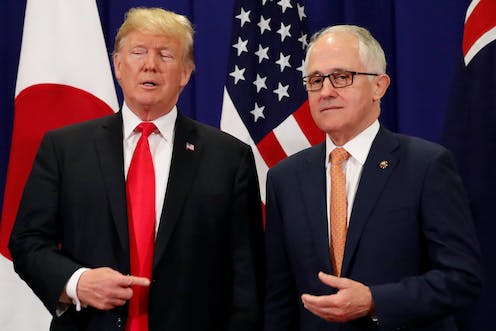 Malcolm Turnbull was no doubt relieved when the prime ministerial jet lifted off from Australian soil yesterday, bound for the United States and his first formal round of discussions in Washington with an American president.

In Turnbull’s own words – applied to Deputy Prime Minister Barnaby Joyce’s domestic troubles – he will be hoping to leave behind a “world of woe”.

After a steadier start to the new year, the Joyce scandal, involving an affair with a political staffer, has cut the ground from under those improved prospects.

This has been reflected in the latest round of polling, which shows the Coalition slipping back against the Labor opposition. Turnbull’s own approval rating has taken a hit.

For these and other reasons, not least the need to establish a sound working relationship with a new administration, the prime minister will be looking to a circuit-breaker.

Read more: Fischer calls for quick resolution of Nationals crisis, while Joyce is determined to fight to the death

Whether Turnbull’s “first 100 years of mateship” visit to Washington – with state premiers and business leaders in tow – provides a diversion from his domestic woes remains to be seen.

The hokey branding for the mission refers to the centenary of American soldiers fighting under Australian command on the Western Front in the Battle of Hamel in 1918.

How to respond to North Korea’s provocations represents an immediate problem. But in the longer term, China’s expanding power and influence constitute the greatest security challenge facing Australia since the second world war.

In his public statements, Turnbull has been alternately hawkish and conciliatory toward Beijing, but it appears his instincts tend to align themselves with an American hedging strategy.

The Turnbull view of how to manage China’s rise was given particular expression in a speech in June 2017 to the annual Shangri-La Dialogue in Singapore. In this speech he called for “new sources of leadership [in the Indo-Pacific] to help the United States shape our common good”.

Turnbull’s Shangri-La speech was forthright for an Australian prime minister. He sharply criticised China’s “unilateral actions to seize or create territory or militarise disputed areas” in the South China Sea.

Beijing denies it, but it is clear it has been constructing a defence perimeter on islands and features in disputed waters. This prompted the following from Turnbull:

China has gained the most from the peace and harmony in our region and it has the most to lose if it is threatened … A coercive China would find its neighbours resenting demands they cede their autonomy and strategic space and look to counterweigh Beijing’s power by bolstering alliances and partnerships, between themselves and especially with the United States.

That speech was followed by increased efforts to expand a quadrilateral security dialogue between Australia, Japan, India and the US.

What steps might be taken to further develop security collaboration between Australia, the US, India and Japan will almost certainly be on the table in Washington.

The Trump administration’s appointment of Admiral Harry Harris, the outgoing head of the US Pacific Command, as the ambassador-designate in Canberra is a signal of its intentions.

Harris has a hawkish view of China’s expanding influence in the Indo-Pacific. His participation in a security conference in Delhi in January along with Australian, Japanese and Indian naval commanders was significant in light of stepped-up efforts to bolster maritime collaboration between Quad members.

However – and this is a sizeable “however” – Turnbull needs to be careful not to be sucked into an American slipstream where China is concerned. Australia’s commercial interests dictate prudence in how it positions itself between a rising China and the US under an unpredictable Trump presidency.

The new US National Defence Strategy exposed differences between Canberra and Washington in their views of “revisionist” China and Russia as threats to US hegemony.

Foreign Minister Julie Bishop felt obliged to distance Australia from the Trump administration’s characterisation of attempts by China and Russia to “shape a world consistent with their authoritarian model”. She said:

We have a different perspective on Russia and China, clearly. We do not see Russia or China as posing a military threat to Australia.

Turnbull, for his part, provided a more nuanced response. He said:

We don’t see threats from our neighbours in the region but nonetheless every country must always plan ahead and you need to build the capabilities to defend yourself not just today but in 10 years or 20 years hence.

Australia’s 2016 Defence White Paper and 2017 Foreign Policy White Paper (the two documents should be read in conjunction) sketched out a future in which the country needs to buttress its defence capabilities in light of China’s rise.

The US withdrawal from the TPP, as one of Trump’s first executive acts as president, was disappointing. A trading bloc in the Indo-Pacific accounting for 36% of global GDP would have served as a counterweight to China’s surging trade and investment ambitions.

Significantly, Turnbull will discuss the CPTPP on the eve of the initialling of the agreement among the 11 remaining participants on March 8.

Trump has indicated he might be receptive to arguments for American re-engagement in the CPTPP process. However, this would require the renegotiation of provisions on such contentious issues as dispute settlements, copyright and intellectual property.

It is hard to see this happening in a timely manner. In a sense, the train has left the station.

Read more: Trump and Turnbull have little cause for satisfaction over progress in Afghanistan

The Turnbull-Trump focus on China may also yield discussion about a competing regional infrastructure investment initiative to balance China’s “Belt and Road” program.

The latter is a vast Chinese infrastructure scheme. China is seeking to strengthen its influence in surrounding states by recycling a portion of its foreign exchange reserves in road, rail, port and other such projects.

It is not clear just how Turnbull and Trump might seek to provide alternative sources of infrastructure funding for projects to counter Chinese attempts to buy influence far and wide.

Such a scheme emerged from a pre-summit briefing in Canberra. The fact it is being floated attests to concerns in Washington and Canberra about China’s success in using its financial heft to extend its security interests.