Operatic adaptation of Shakespeare, particularly in English, has often been a graveyard of hopes despite grand plans and lofty aspirations. Verdi’s three Shakespearean operas, Macbeth, Otello, and Falstaff, dominate the Shakespearean operatic repertoire. Perhaps the only English-language version of the Bard that might be included in their august company is Britten’s A Midsummer Night’s Dream.

If any theatrical work in the western canon deserves that overused term “iconic”, Hamlet is it. It is perhaps thus not surprising that it is one of the most frequently adapted of Shakespeare’s plays with something over 40 operatic versions known to have been written; most have not survived.

Brett Dean is one of the most highly regarded composers in the contemporary classical music world, and Hamlet is his second opera following Bliss (2010), his well-received adaptation of Peter Carey’s novel. Canadian director, Matthew Jocelyn, provides a libretto culled from the various sources of the play. The opera is directed by Neil Armfield, who also directed Bliss and has much experience directing Shakespeare.

An early creative decision was to use only Shakespeare’s text, apart from a few small additions for the chorus. There are three main versions of the play, Dean and Jocelyn closely examined them and used some of the First, or “bad” Quarto - thought to be the imperfect recollections of an actor who played Marcellus in Shakespeare’s time. This text provides a poetic, yet interesting variation on the standard Second Quarto and First Folio versions.

Hamlet was premiered to great acclaim at Glyndebourne in June 2017, and is the centerpiece of the Adelaide Festival in Armfield’s clear and effective production, aided by a strikingly elegant country-house setting by Ralph Myers and equally impressive costumes by Alice Babidge. Several members of the original cast reprise their roles, including a mesmerizing and monumental performance in the title role by Allan Clayton.

He is a rumpled, white-faced, shambling figure throughout, but stares down the myriad vocal challenges of the role with great aplomb. Rodney Gilfrey is a vocally suave Claudius, while Rosencrantz and Guildenstern are played for comedy by Christopher Lowrey and Rupert Enticknap - their countertenor voices providing an interesting range of colours to the vocal sound palette. 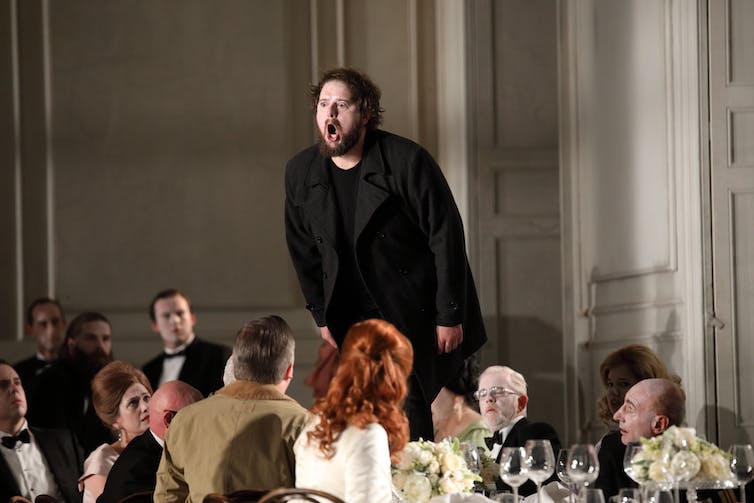 New to their roles are Cheryl Barker as a warmly sympathetic Gertrude, and Lorina Gore, who takes over Ophelia from the phenomenal Canadian soprano, Barbara Hannigan. Gore creates a more vulnerable and sympathetic character and addresses all the physical and vocal challenges met so memorably by Hannigan.

Gore’s voice has a velvety, transparently lyrical quality that suits Dean’s music perfectly. Strong performances come from Jud Arthur in multiple roles, and Douglas McNicol as a fatherly Horatio. All musical resources are under the firm and expressive control of Nick Carter - Dean’s extensive chorus demands are met by the State Opera Chorus augmented by the Song Company; the Adelaide Symphony is outstanding in this challenging music.

The final scenes of the opera build towards an intense climax. Hamlet’s “I loved Ophelia” is declaimed over a surging orchestral accompaniment that adds a visceral component to the scene, often lacking in the play where many find Hamlet’s statement hard to accept or believe.

Gertrude’s “For love of God, forbear him”, which follows, has an almost unbearable pathos - the character draws in much sympathy from the audience. Hamlet and Horatio’s silent moments together before the final cataclysmic scene have music of the intensity found in the operas of Alban Berg or the symphonies of Gustav Mahler.

These scenes demonstrate what opera at its best does, and what no other performing art form can do so effectively. Jocelyn’s libretto is a masterpiece of construction, using apposite words and phrases culled from the various sources but which demonstrate an absolute logic to the unfolding catastrophe. There is even space for a final comic turn preceding the duel - a truly Shakespearean contrast, with comedy leavening the tragedy. 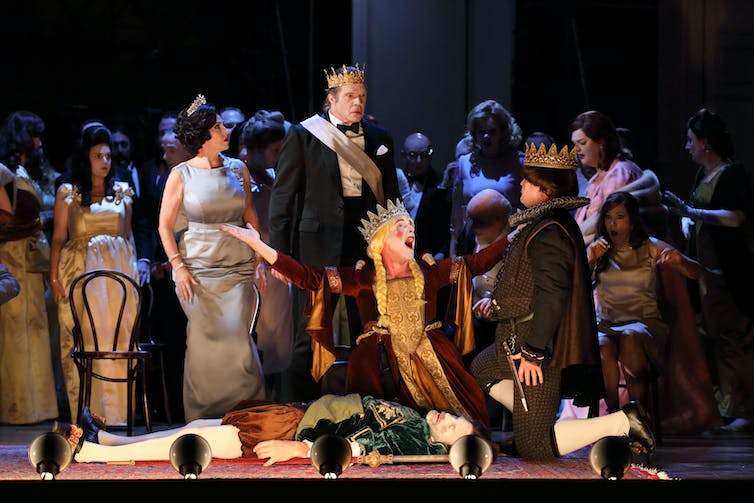 This work has been hailed by many as a beacon for a much maligned art form supposedly on death watch. Tony Lewis

But there are many moments of almost unbearable pain and poignancy. Dean here shows his absolute mastery of writing for operatic forces. Is there another contemporary opera composer who demonstrates such orchestral brilliance and vocal understanding?

His first opera, Bliss, dazzled with its orchestral and vocal fireworks, but Hamlet reveals the mature opera composer who fully understands the particular and exacting demands of the form. That is why this work has been hailed by many as a beacon for a much maligned art form supposedly on death watch.

This is no neo-romantic, characterless music that often passes for the cutting edge today, but a musical idiom that demands much of its audiences. However, the opera will reward those prepared to embark on an unsettling, often disconcerting journey.

It is a confronting three hours in the theatre, but then so is Shakespeare’s play. This is not a perfect opera - the first act has a few passages that lack tautness and dramatic drive, with occasional longueurs, but the second act is one of the great acts of 21st century opera, devastating in its emotional impact.