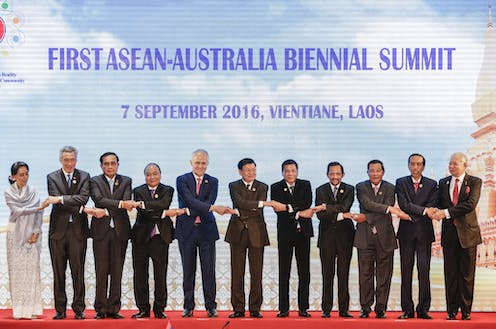 Australian leaders have been eager to emphasise ASEAN’s importance. In his keynote speech at the Shangri-La Dialogue in 2017, Turnbull stressed:

We support a strong, united ASEAN that continues to convene and strengthen organisations such as the East Asia Summit … We support an ASEAN that remains committed to liberal economic values.

The point was reinforced by Foreign Minister Julie Bishop at an event in Bangkok celebrating ASEAN’s 50th anniversary:

… the central and essential role of ASEAN is recognised and respected by the great powers of the world. In a period of opportunity and challenge, we will need to strengthen that role and standing of ASEAN’s so as to advance peace, freedom and prosperity in the region and beyond.

The summit may build on the momentum of recent years. But there are still some hurdles to be overcome for the ASEAN-Australia relationship to reach its full potential.

Potential for a stronger relationship

The ASEAN-Australia relationship is longstanding, but has at times lacked substantive action to reinforce mutual commitments.

Australia’s challenge is to prove its utility to ASEAN, and vice versa. Therefore, each needs to be clear on how it views the other, and how the relationship can be of mutual benefit.

Australia became ASEAN’s first dialogue partner in 1974, but took until 2013 to establish a mission and appoint an ambassador to the association. Beyond official ties, Australia has not founded its own ASEAN Studies Centre, which many of ASEAN’s partners have done.

Australia’s alliance with the US and historical ties to the UK have at times called into question its role within Asia. Meanwhile, ASEAN has been criticised by some observers as having little consequence to security and diplomacy, and is frequently assessed as underperforming or unable to meet the challenges it faces in its region.

Read more: The Australia-ASEAN partnership at 40: past dilemmas and future prospects

Currently, there is much talk of shared values and a common commitment to a rules-based order. Yet not all of ASEAN’s and Australia’s priorities align.

Despite these issues, Australia and ASEAN have successfully maintained a constructive partnership. Initiatives such as this weekend’s summit could further alleviate any doubt or misunderstanding.

The 2017 Foreign Policy White Paper framed Australia’s priorities in terms of the Indo-Pacific. Australia is not alone here. The Trump administration’s National Security Strategy emphasised the region, and Indonesian President Joko Widodo spoke recently of his desire for a “stable, peaceful and prosperous” Indo-Pacific.

Overlapping but also contested ideas of the Indo-Pacific will need close consultation between Australia, ASEAN and other partners. Handled correctly, this could bolster Australian ties with ASEAN, but it also comes with risks.

There is also the question of how Australia’s conception of the Indo-Pacific and commitment to ASEAN will contribute to – or undermine – security efforts, especially in relation to China’s growing assertiveness in the region and renewed momentum of the idea of the “Quad”. Likewise, the Trump administration’s impact on America’s global role requires careful navigation by Australia and ASEAN.

The foreign policy white paper also emphasised southeast Asia more than ASEAN, and Australia’s commitment to working with democracies in the region. Both aspects will need careful balancing so that Australia remains steadfast to its interests and values, but does not sideline ASEAN in the process.

Most importantly, there is a need to move beyond binary debates about ASEAN’s effectiveness, which have tended to dominate discussions. Despite ASEAN’s shortcomings, challenges and moments of disunity, it cannot be dismissed or ignored.

As a grouping, ASEAN is Australia’s third-largest trading partner, and its members constitute Australia’s closest neighbours. Without ASEAN-led forums such as the East Asia Summit, the ASEAN Regional Forum, and the ASEAN Defence Ministers’ Meeting-Plus, there would be far fewer opportunities for Australia to engage with its partners in the region and beyond.

Rather than seeing Australia’s mix of history and geography as a source of contention, ASEAN members can enrich the ASEAN-Australia partnership by drawing on the unique strengths that come from being located in Asia but having ties to Europe.

Relations between the European Union and Australia have intensified in recent years, and the EU and Australia are committed to working together in the Asia-Pacific. This is demonstrated by initiatives such as the ASEAN Regional Forum workshop in 2017 on the prevention of violent extremism, which was co-hosted by the EU, Australia and the Philippines.

The Australian government should reflect on how ASEAN expertise can advance its aims, and where Australian support for ASEAN is most valuable. It has been emphasised that Australia needs to listen to ASEAN thinking to increase its influence and learn about ASEAN’s strategies. ASEAN’s leaders, then, must be ready to share their expectations with Australia. The special summit may just be the place.