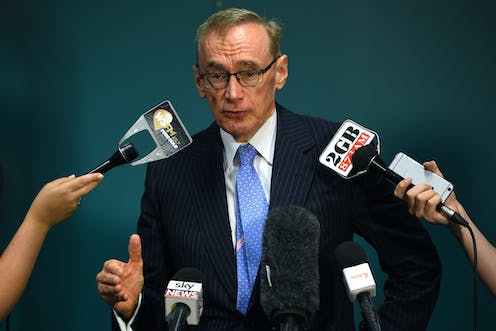 It’s not new to find politicians claiming public opinion is on their side on contentious issues. So, we shouldn’t be surprised when former New South Wales premier and foreign minister Bob Carr – who has a decades-long record of opposition to a “big Australia” – says there has been a significant shift in public opinion on the topic. But we should politely ask for his sources.

On the ABC’s Q&A on Monday night, Carr said:

The first poll I’ve seen that indicates a big shift in public attitudes … came out in recent months. It shows 74% of Australians think there is enough of us already … I find that interesting. It’s the first breakthrough … in the last 12 months, the message has sunk in.

It seems no-one – not least Q&A host Tony Jones – bothered to question the “big shift” nor the 74% figure in the subsequent discussion or media coverage. Where did it come from?

It’s possible this finding came from a survey conducted in August 2017 for the Australian Population Research Institute.

The survey employed a commercial panel, which yields a large number of respondents but is not a random sample of the population. Of those who were Australian voters, 54% indicated the number of immigrants “should be reduced”. The survey then went on to ask several additional questions – some of which were of the leading variety.

The survey informed respondents that:

From December 2005 to December 2016 Australia’s population grew from 20.5 million to 24.4 million; 62% of this growth was from net overseas migration.

With this wording, the proportion with a negative view of immigration (that is, Australia does not need more people) jumped to 74%. This is a clear indication of the impact of question wording and context.

A finding not supported elsewhere

Almost at the same time as this survey, in June-July 2017, the Scanlon Foundation conducted two surveys. In its annual survey, which is interviewer-administered and is a random sample of the population, the Scanlon Foundation employed a question that has been used in Australian surveying for more than 50 years and hence provides scope to track trend of opinion over time. It asked:

What do you think of the number of immigrants accepted into Australia?

It found just 37% considered the intake to be “too high”, 40% “about right”, and 16% “too low”. The proportion concerned by the level of immigration is within one percentage point of the average of ten years of Scanlon Foundation surveying. With attention narrowed to respondents who are Australian citizens (and have voting rights), there is little difference in the result.

An issue in surveying is the impact of interviewer administration. Some argue that self-administered surveys, completed online, are more reliable.

To test the impact of the mode of surveying, a set of questions was administered in a second Scanlon Foundation survey using the Life in Australia panel. The large majority of these respondents complete the survey online, without interviewer assistance, and the panel was formed using a probability process to reflect the Australian population.

The finding was almost identical with the result obtained in the first Scanlon Foundation survey: a minority – 40% – considered the intake to be “too high”.

There have been several other probability-based surveys on attitudes to immigration in 2016 and 2017, including the Australian Election Study conducted by researchers at the Australian National University, a Morgan survey, and the annual Lowy Institute Poll.

None of these surveys obtained a majority agreeing that immigration is “too high”, much less concern at the level of 74%. The 2017 Lowy Institute Poll found 40% favour reduction.

Most surveys are consistent in finding there is a substantial minority of the view that immigration is too high, but not a large majority, as Carr claimed.

The importance of context

In evaluating survey findings, attention needs to be directed to sampling procedure (whether random or not), the question asked, the context of the question, and the record of all relevant surveys – not just one survey.

There is one additional issue of note: public controversy and claims made about the impact of immigration can shift opinion in a short time.

In 2010, in the context of political campaigning focused on immigration and “big Australia”, the Scanlon Foundation survey recorded a shift of ten percentage points in the level of concern about immigration.