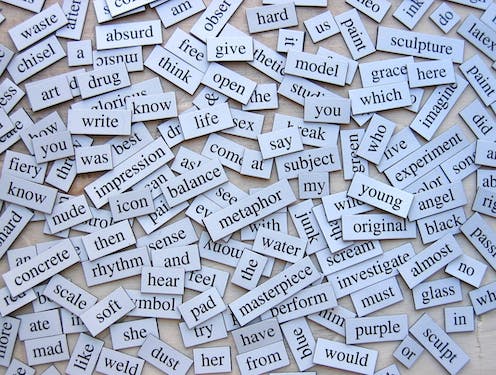 My grammar checker and I are on a break. Due to irreconcilable differences, we are no longer on speaking terms.

It all started when it became dead set on putting commas before every single “which”. Despite all the angry underlining, “this is a habit which seems prevalent” does not need a comma before “which”. Take it from me, I am a linguist.

Read more: How students from non-English-speaking backgrounds learn to read and write in different ways

Let me give you an example. Take sentences like “there is X” and “there are X”. You may have been taught that “there is” occurs with singular entities because “is” is the present singular form of “to be” – as in “there is milk in the fridge” or “there is a storm coming”.

Conversely, “there are” is used with plural entities: “there are twelve months in a year” or “there are lots of idiots on the road”.

What about “there’s X”? Well, “there’s” is the abbreviated version of “there is”. That makes it the verb form of choice when followed by singular entities.

It turns out that spoken English favours “there is” and “there’s” over “there are”, regardless of what follows the verb: “there is five bucks on the counter” or “there’s five cars all fighting for that Number 10 spot”.

A question of planning

This is not because English is going to hell in a hand basket, nor because young people can’t speak “proper” English anymore.

They found that the contracted form “there’s” is a go-to form which seems prevalent with both singular and plural entities. But there’s more. The greater the distance between “be” and the entity following it, the more likely speakers are to ignore the plural rule.

“There is great vast fields of corn” is likely to be produced because the plural entity “fields” comes so far down the expression, that speakers do not plan for it in advance with a plural form “are”.

Even more surprisingly, the use of the singular may not always necessarily have much to do with what follows “there is/are”. It can simply be about the timing of the event described. With past events, the singular form is even more acceptable. “There was dogs in the yard” seems to raise fewer eyebrows than “there is dogs in the yard”.

Read more: How students from non-English-speaking backgrounds learn to read and write in different ways

The disregard for the plural form is not a new thing (darn, we can’t even blame it on texting). According to an article published last year by Norwegian linguist Dania Bonneess, the change towards the singular form “there is” has been with us in New Zealand English ever since the 19th century. Its history can be traced at least as far back as the second generation of the Ulster family of Irish emigrants.

Editors, language commissions and prescriptivists aside, everyday New Zealand speech has a life of its own, governed not so much by style guides and grammar rules, but by living and breathing individuals.

It should be no surprise that spoken language is different to written language. The most spoken-like form of speech (conversation) is very unlike the most written-like version of language (academic or other formal or technical writing) for good reason.

In conversation, there is no time for planning. Expressions come out more or less off the cuff (depending on the individual), with no ability to edit, and with immediate need for processing. We hear a chunk of language and at the same time as parsing it, we are already putting together a response to it – in real time.

This speed has consequences for the kind of language we use and hear. When speaking, we rely on recycled expressions, formulae we use over and over again, and less complex structures.

For example, we are happy enough writing and reading a sentence like:

That the human brain can use language is amazing.

But in speech, we prefer:

It is amazing that the human brain can use language.

Both are grammatical, yet one is simpler and quicker for the brain to decode.

We call these seemingly unnecessary pronouns (“them” in the previous example) “shadow pronouns”. Even linguistics professors use these latter expressions no matter how much they might deny it.

There is another interesting difference between speech and writing: speech is not held up on the same rigid prescriptive pedestal as writing, nor is it as heavily regulated in the same way that writing is scrutinised by editors, critics, examiners and teachers.

This allows room in speech for more creativity and more language play, and with it, faster change. Speech is known to evolve faster than writing, even though writing will eventually catch up (at least for some changes).

I would guess that by now, most editors are happy enough to let the old “whom” form rest and “who” take over (“who did you give that book to?”).