As Hobart’s Old Government House was being demolished in the late 1850s, workers made a remarkable discovery. Lifting the floor, they found an old pine board covered with four rows of pictures. Six scenes painted in oils depicted interactions between white people and Aboriginal men, women and children.

An old colonist who had arrived in Van Diemen’s Land back in 1804 remembered seeing such a picture board. She told The Mercury newspaper in November 1874 how she recalled it

hanging on a gum tree at Cottage Green [now Battery Point] where … there was an Aboriginal “Home”, to the occupants of which rations were issued.

In the early decades of the Australian colonies, British officials tried different techniques to communicate with Aboriginal people. Some strategies were brutal, such as when Governor Arthur Phillip had Arabanoo, and later Colebee and Bennelong, kidnapped. The Governor planned to restrain these Aboriginal men until they learned English and could act as go-betweens (eventually Bennelong became an intermediary and a companion to Phillip).

Read more: Explainer: the evidence for the Tasmanian genocide

Other communication strategies were more creative. Around 1816, Governor Lachlan Macquarie used proclamations nailed to trees to try to convey messages to Aboriginal people in New South Wales. None of these are known to have survived. In the 19th century, visiting Italian scientist Enrico Giglioli thought that Tasmania’s colonists were copying Macquarie’s approach when they began using picture boards. 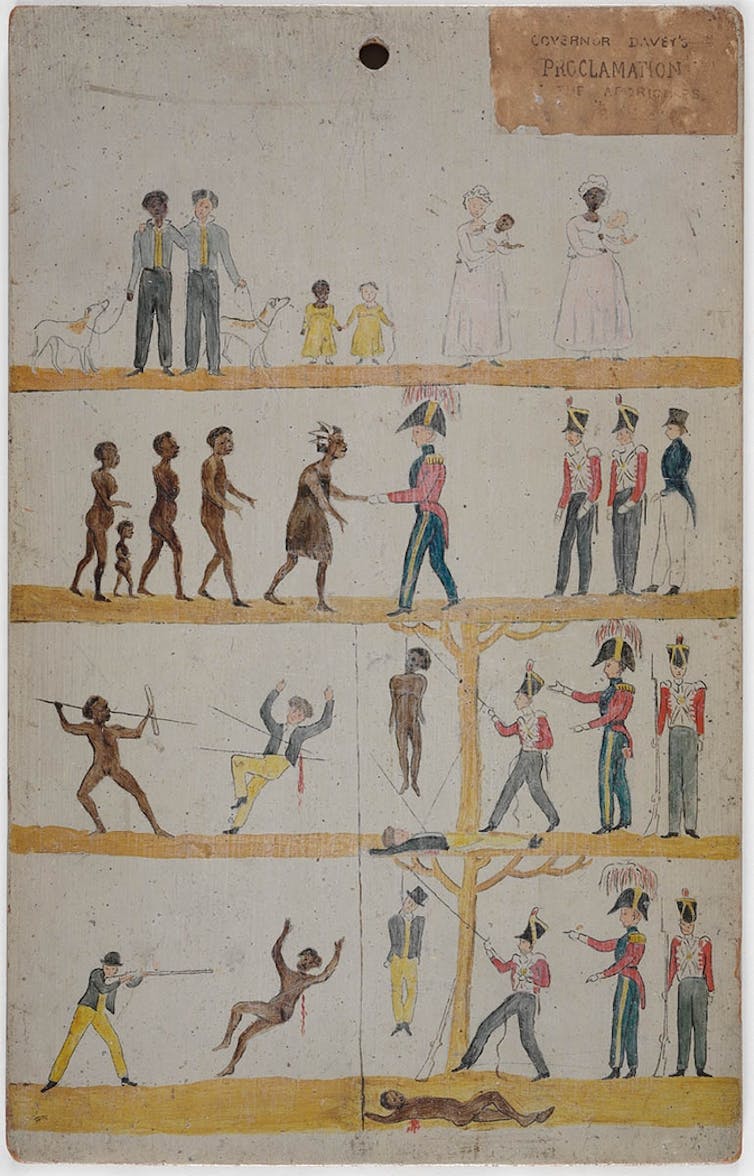 Tasmanian Picture Board, 35.5 cm x 22.6 cm, c. 1830. An example of one of the seven surviving boards. The nail hole from when the board was attached to a tree can be seen in the top centre. Mitchell Library, State Library of New South Wales

The Tasmanian picture board found stashed under Old Government House is rare. Only six others like it survive, all bearing the same picture sequence. This design has become relatively well known. Yet people continue to debate the meaning behind the boards. Some believe they depict the rule of law, others see martial law.

The central motif of the Lieutenant-Governor shaking hands with an Aboriginal leader, and the other pictures illustrating equality, have led scholars to conclude that picture boards were used to promote conciliation and harmony.

In 2014, fellow historian Nick Brodie and I were astonished to read detailed descriptions of two very different Tasmanian picture boards, in a manuscript by an unidentified author held in the Allport Library in Hobart. The author wrote about “Several Paintings of Panel […] about Eighteen Inches Square” that were “divided into compartments each of which represented a series of Actions admonitory to the Natives of the course intended by the Government to be pursued in future towards them”.

These visual warnings to Aboriginal people were part of Lieutenant-Governor George Arthur’s propaganda campaign during the Vandemonian War. We were intrigued by the scenes the writer described. To bring these to life, we invited Melbourne-based Tasmanian artist Simon Barnard to create impressions of what these other picture boards might have looked like. 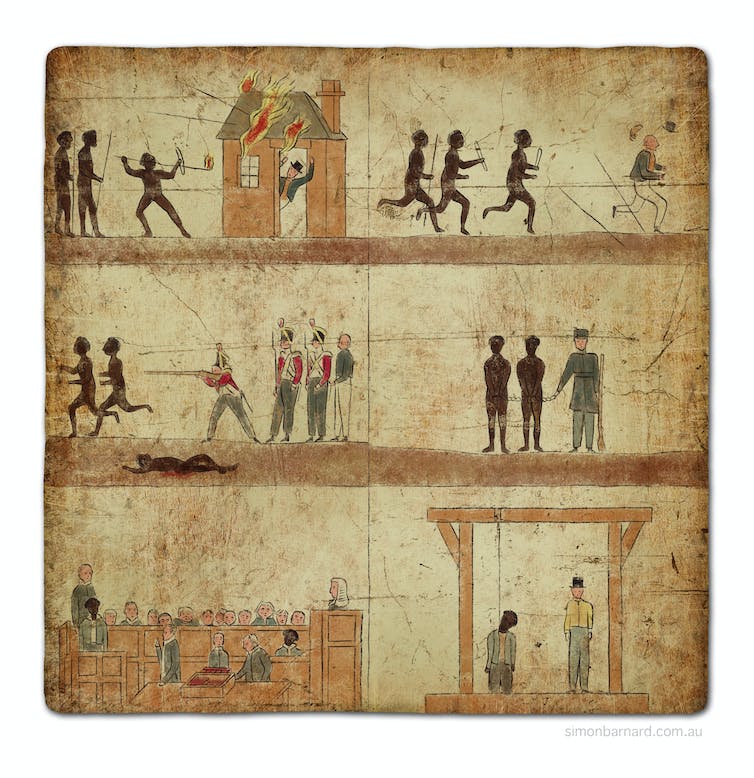 A reconstruction of the altercation-themed Tasmanian picture board by Simon Barnard (2015). © Kristyn Harman and Nicholas Dean Brodie, Author provided

The manuscript described scenes mirroring events that actually occurred. Take, for example, the Aboriginal man pictured in chains. In August 1830, following an altercation between field police and Aboriginal people at the Shannon River in Central Tasmania, the Colonial Times reported how an Aboriginal leader was

led in chains to the capital […] a large and heavy cart chain was twisted around his neck, and the other end of it was in the left hand of one of the conquerors.

The newspaper stated that two Aboriginal men were killed during the Shannon River affray. Other Aboriginal men, including the well-known resistance leader and convict from New South Wales, Musquito, were hanged in Hobart.

The two boards described in the manuscript presented Aboriginal people with a grim choice. Resist the British and guns and death awaits you. Adopt colonial ways and things will be better for you. The writer even suggested that “Official Rank & Station should be open to them [Aboriginal people] & […] they might even aspire to the dignified & confidential Employment of Postman”. 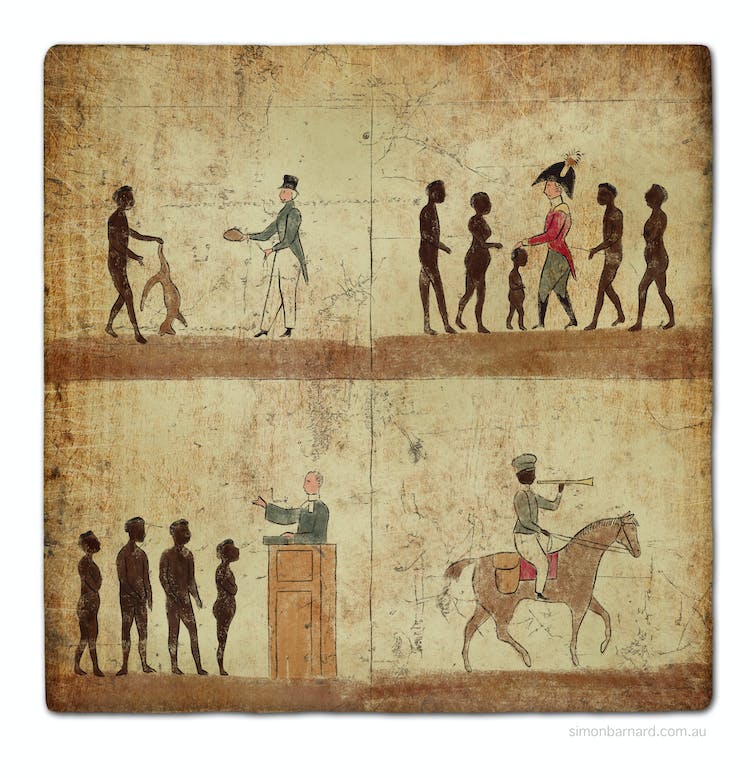 The accounts of these more recently rediscovered boards complicate our understandings of Van Diemen’s Land, by showing how the colonial government offered stark terms. Depicting “soldiery […] firing upon a tribe”, these images convey the brutal realities of the Vandemonian War more accurately than the board found under Old Government House. Rather than implying friendship and equality, the sequences of pictures on these other two boards illustrate diverging paths for Tasmania’s Aboriginal people following the British invasion.

The altercation-themed board’s picture sequence showed how, if Aboriginal people continued to resist the invasion, they would continue to be shot by soldiers, field police, armed settlers, and convicts. Those taken into custody could face the hangman.

On the other hand, the assimilation-themed board depicted how, in order to survive, the island’s original inhabitants could adopt Western ways. It showed Tasmanian Aboriginal people peacefully trading with the newcomers, being subservient to the Lieutenant-Governor, wearing colonial clothing, attending church, and taking up employment.

Little evidence has survived to tell us how Aboriginal people engaged with or reacted to picture boards. We know at least one Tasmanian Aboriginal man became familiar with the imagery.

On 26 November 1830, the Tasmanian and Austral-Asiatic Review reported how Surveyor-General George Frankland gave the well-known leader Eumarrah a “little sketch” that illustrated:

[…] the consequences of the Aborigines adopting a peaceable demeanour, or of continuing their present murderous and predatory habits. In one part of the sketch, the soldiery were represented firing upon a tribe of the Blacks, who were falling from the effects of the attack. On the other part were seen, another tribe, decently clad, receiving food for themselves and families.

Ultimately this colonial propaganda was telling Tasmanian Aboriginal people that they really had no choice at all. Assimilate to survive. Resist, and perish.