IN DEPTH: In this longer essay, David Irving and Alison Gould explore our cultural obsession with young blood and whether there’s any scientific evidence that transfusions of it can delay the ageing process.

Ben Franklin famously wrote: “In this world, nothing can be said to be certain, except death and taxes”. What he didn’t mention, despite being 83 years old, was a third, almost inevitable eventuality: ageing.

Depending on when in history and where on the planet you look, ageing is variously considered desirable – bringing with it wisdom and status – or as something to be feared, eliminated, or at least delayed as long as possible.

In the 16th to 18th centuries, Western societies believed old age was a time of considerable worth. But, since the 19th century, we have sought ways to eliminate or minimise the effects of ageing.

Read more: The search to extend lifespan is gaining ground, but can we truly reverse the biology of ageing?

Even in the time of Herodotus (the 5th century), there were stories of a “Fountain of Youth” located far away in the land of the Ethiopians, whose waters would bring youth and vigour to those who drank from it.

Blood is a potent symbol of life and of death. It is hardly surprising, then, that this incredible fluid is linked to the search for eternal youth in literature, legend, magic and medicine.

Recent scientific studies have claimed, almost vampire-like, that transfusions of blood from teenagers can help delay or reverse the ageing process. Where do these claims come from? Do they stack up? And how long will it be before we have the power to stave off what now is inevitable?

The first blood transfusion from one human to another is reported to date from 1492, for Pope Innocent VIII.

There is some discussion as to whether this was an attempt at a blood transfusion as we understand it today, or some other form of administration of blood (such as oral), given that the theory of circulation of blood was first published in 1628, some 150 years later.

Sources from 1873 stated that:

All the blood of the prostrate old man should pass into the veins of a youth who had to yield up his to the Pope.

But earlier reports, from 1723, were less specific:

[T]hree ten-year-old boys died because blood had been taken from their veins … in an attempt to cure the Pope.

Whatever the truth of the treatment, the pope did not recover, and neither did the boys. Here, at what is arguably the start of transfusion history, we can already see the lure of the belief in the power of young blood. 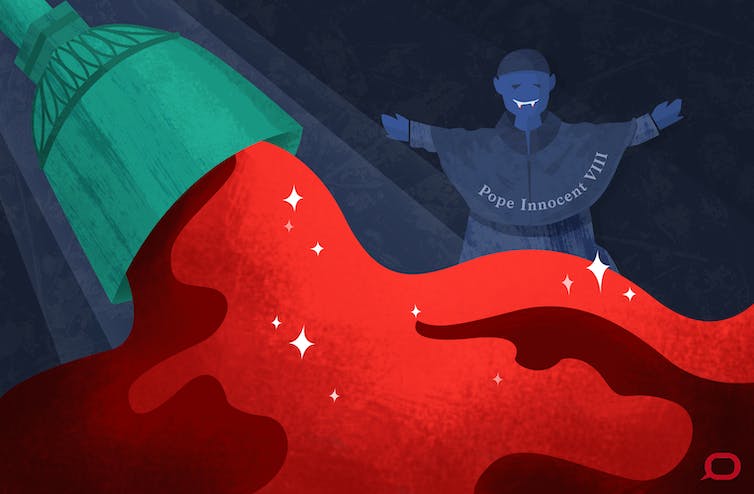 Fast forward to 2017, and the reputation of “young blood” is moving into the world of big business.

A company called Alkahest, based on work by Tony Wyss-Coray, a neurobiologist studying Alzheimer’s disease at Stanford University, is spruiking the results of a trial where plasma from young donors (aged 18-30) was transfused into patients with dementia.

Eighteen patients aged between 54 and 86 with mild to moderate Alzheimer’s disease were enrolled in the trial. They were infused with plasma (or placebo, in a control group) twice a week for four weeks.

Thankfully the trial was more successful than Pope Innocent VIII’s treatment. None of the patients showed any ill-effects, but neither did they show any improvement in tests of thinking ability. They did, however, demonstrate some improvement in tests that assessed their daily living skills.

Read more: From animal experiments to saving lives: a history of blood transfusions

At almost the same time, controversial trials by a company named Ambrosia (“food of the Gods” depicted as conferring immortality) are transfusing plasma from people aged 16-25 into people aged 35 to 92.

Despite the experimental nature of this treatment, participants are paying US$8,000 each to be included in the trial, for which there is no control group.

These factors make it virtually impossible to interpret the results, because people in the trial may “feel better” merely through having paid money for a treatment they believe is going to work.

The results of the study so far were presented by Jesse Karmazin at the Recode technology conference in Los Angeles in mid-2017. Ambrosia’s scientists examined the levels of various molecules, believed to be predictive of cancer or Alzheimer’s disease, in the blood of people who had been treated.

They found that those who had been treated with young blood had lower levels of several proteins known to be involved in disease, namely carcinoembryonic antigens (which increase in cancer patients) and amyloid (which forms plaques in the brain in Alzheimer’s disease patients).

However, the long-term significance of these changes is unclear.

The science of stealing youth

Science has come a long way since Pope Innocent VIII, so what has led these modern scientists to try what appears to be a modern version of a very similar experiment?

The roots of both these companies lie in experiments in “parabiosis” (from Greek par meaning alongside, and bios meaning life) – a technique that dates back to the 1864 physiologist Paul Bert.

Bert surgically spliced animals together in his lab, so that two animals shared a single blood supply. This grizzly practice provides an opportunity to find out how soluble blood factors affect various bodily functions. 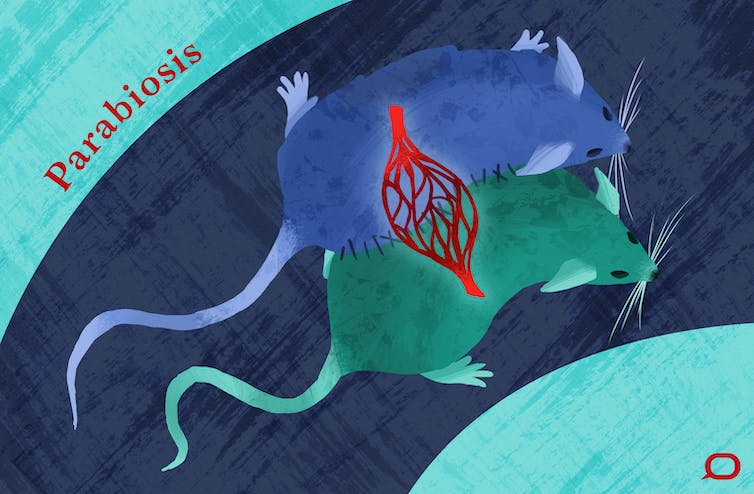 A group at Stanford University, led by Thomas Rando, and including Irina Conboy, found in 2005 that when they joined the bodies and circulations of old and young mice, the muscle and liver cells in the old mice were able to regenerate as well as those in their younger counterparts.

Several experimental avenues led the researchers to conclude that the factor involved was circulating in the blood, although its identity was not known.

In 2007, Tony Wyss-Coray analysed the plasma proteins of patients with Alzheimer’s disease along with those from healthy people over a number of years. He found that levels of proteins in the blood change with age, some increasing, others decreasing.

His doctoral student at the time, Saul Villeda, looked at effects of parabiosis on the brain and found that the old mice in the pairs enjoyed more brain connection, and the brains of the young mice physically deteriorated.

But it was hard to test how well these brains worked in practice, because measuring an old mouse’s ability to find its way through a maze is difficult when it is physically attached to a young mouse, who may be leading the way!

There are other problems with the interpretation of parabiosis experiments. Old animals have access to the effects of younger organs, and their brains may also benefit from the environmental enrichment of being paired with a younger animal.

The search was on for what factor or factors may be responsible for the dramatic effects seen in parabiosis experiments, and to find if their rejuvenating effects could be replicated without the inconvenience of sharing a circulatory system. There are a few molecular suspects so far.

A protein known as GDF 11 is one contender for the title of “youth protein”. In 2013, researchers Amy Wagers and Richard Lee found that this protein from the blood of young mice can reverse the symptoms of heart failure in older mice. A year later they showed that GDF 11 appeared to act on skeletal muscle stem cells and enhance muscle repair.

Other studies have disagreed, suggesting that GDF 11 in fact increases with age and inhibits muscle repair. There are several technical reasons why these studies differ, and further studies may shed light on the role of GDF 11 and similar proteins.

In 2014, researchers Saul Villeda, Tony Wyss-Coray and their team found that exposing an old mouse to young blood can decrease apparent brain age. The effects were seen not only at the molecular level, but also in the structures of the brain, and in several measures of learning and memory.

In this case, the effects were controlled by a specific protein in the brain known as Creb (cyclic AMP response binding element), although the stimulating factor in the blood was not identified. 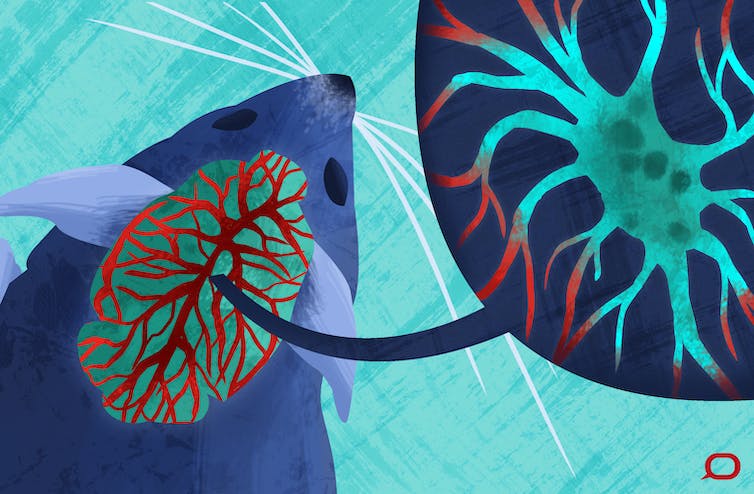 The development and control of the brain involves numerous molecular signals, and a recent study has found yet another link between young blood and brain development. A protein in the brain, Tet2, declines with age, but mice whose brains have been given a boost of Tet2 are able to grow new brain cells and they improve at mouse-learning tasks.

Such a boost in Tet2 can be provided by the presence of young blood because in these experiments, old mice who are joined to young mice in a parabiosis have an increase in Tet2 in their brain. This provides yet another clue to the mechanism by which young blood acts on the brain.

While old mice show benefit from transfusions of young mouse blood, the opposite is also true: young mice show signs of ageing when exposed to their elder’s blood. It appears there are not just “youth proteins” present in young blood, but also “elder proteins” in the blood of older animals.

In 2016, Irina Conboy’s research team used a blood exchange technique between old and young mice, without surgically joining them. The results of this method would be easier to translate into a human medical setting than parabiosis, as it resembles exchange transfusions that are already used medically.

Read more: I've always wondered: does anyone my age have any chance of living for centuries?

When they received old blood, the muscle strength of young mice decreased, and the growth of their brain cells slowed down.

A protein known as B2M (beta-2-macroglobulin) may be involved in this process, although it does not appear to be elevated with age-possibly acted on by another signal from older blood.

Hanadie Yousef at Stanford University has identified a protein called VCAM1 that increases with age and causes signs of ageing when injected into young mice. What’s particularly interesting is that in her studies, these effects can be blocked by an antibody to VCAM1.

So, where does this lead us today? Can teenagers full of young blood rest safely from elderly vampiric super-villains?

It seems that, rather than being the stuff of myth and magic, there are indeed factors in the blood that change with age: some that increase, some that decrease. Research has started to discover how some of these may work at a cellular level in muscles, organs and in particular, the brain, as we age.

One day these discoveries may lead to rational and targeted therapies for a variety of conditions.

What is certain is that human plasma contains a vast array of active molecules, many of which are already in medical use. Donated plasma has been used for decades to fight disease, control bleeding and help with certain chronic neurological disorders.

Fortunately for us all, plasma from people of all ages can be used in these treatments.